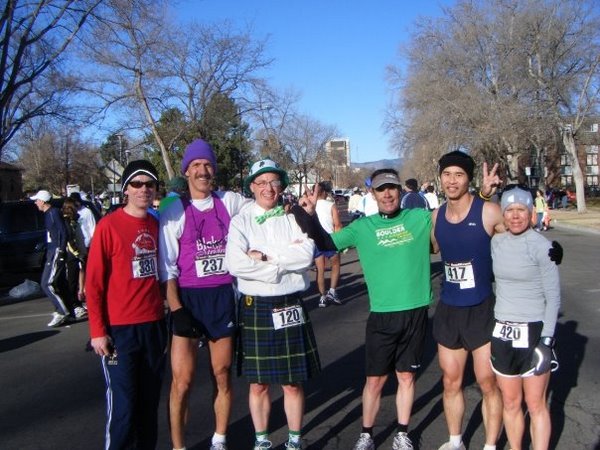 For yet another five-kilometer race in my hometown, my goal was the same and I had no qualms telling other racers about it.

“I want to break 20 minutes, which would be my first time at Fort Collins altitude,” I told Eddie as we waited just feet beyond the starting line of the Sharin’ o’ the Green 5k race. “Good, we’ll pace off of you,” Eddie replied in reference to Tina and him, who were running for “Team AC-FC” like me. Apparently, both of them were targeting 6:30-6:50 miles too.

As it turned out, our entire team seemed to be all pretty close to each other in the race even though we were running independently in a throng of nearly 1,000 runners.

Of our team, I was first off the starting line but Bob caught and dropped me after the first 0.7 mile, quickly running out of sight. Not long after I clicked the lap button on my watch to note a 6:17 first mile, Dan also caught me and was running pretty much even with me until Mile 1.5.

Then I simply could not keep up and gradually fell behind by over 15 feet. The gap continued to increase until about Mile 2.5, when Kyle from the Fort Collins Running Club passed me and said hello, which got me to quicken my cadence by at least a few steps per minute.

With a quarter-mile remaining, I then heard someone spectating (I think it was our friend Kerry) yell out my name. And then one second after that, “Go Eddie!” Apparently, Eddie must have been right behind me! I never turned around to look by how much, but that got me to pick up the pace even more!

After the last turn around Library Park was the finish line about 150 meters beyond, and I waited to round the corner before commencing a sprint to the finish. By this time I was feeling labored enough that I fell back into my really bad habit of running with eyes closed, but out of the slits of my eyes I saw that I was actually passing Dan with about 25 meters (feet) to go. So I finished one second before he did, and while I felt bad for nipping him right before the line, I honestly wasn’t expecting him to merely cruise (or slow down) into the finish as he has some good leg speed.

Eddie was the next from our team to cross the line, and he had some words for me.

“Man, it seemed like I was slowly gaining on you… and I kept thinking ‘okay, just a little bit at a time.’ But then at the end, you picked it up…” I then told him about hearing “Go Eddie!” at the third turn before the finish, which told me he was right behind.

“She blew it for me!” Eddie exclaimed. Thanks, Kerry!

A minute after Eddie was Tina, and then Scott who was running in a kilt (per Irish tradition) and passed his wife Celeste after two miles or so, he told us.

After the race I also saw a bunch of other friends including Cat, Cathy, Kimi, Jeremy, Aubrey, Megan, Steve, Shauna, and Todd, and spent the next hour or so just socializing. This was probably the nicest thing about doing the race—running into so many local friends in one location, including a few I haven’t seen in too long.

Lastly, we found out the results of the race before walking over to the Fort Collins St. Patrick’s Day Parade. While I failed yet again to break 20 minutes at Fort Collins altitude (with an official time of 20:20), I did turn in one of the top three fastest times from our team which counted towards the Team Competition. In that, AC-FC finished second. I felt like I made my contribution for the day.

But as Scott pointed out, if each of us (well, at least our top 3) could have finished the race just 20 seconds sooner, we’d have won! I guess that will be our goal for next year. If I can achieve that, I will finally break 20 minutes at 5,000′ too.

I meant to run this race this year, but missed out, I've heard it's a good one. Next year maybe!