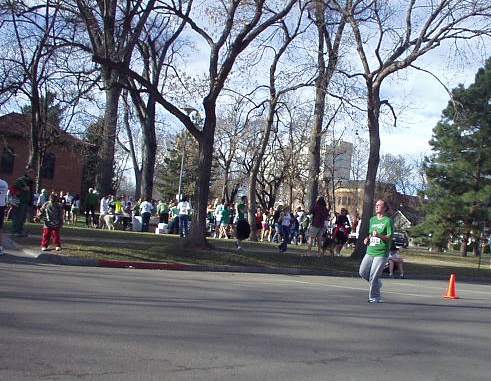 Today was Fort Collins annual St. Patrick’s Day Run dubbed the Sharin’ o’ the Green 5k. Hundreds of Fort Collinsers came on out to show their colors and enjoy in the positively spring-like weather we’ve been having.

After biking over and the “three… two… one… GO!” race countdown commenced, I got off to a quick start mainly due to running behind my friend Nick for the first 0.9 miles. While that resulted in a 6:05 split for the first mile, predictably I could not maintain that, and soon Nick quickly got away from me despite having to stop and tie his shoe.

I focused on just trying to maintain a steady rhythm, but my lungs—which still had some lingering congestion as a result of the air pollution of Panama City—began searing and soon dozens of people were passing me.

In fact—as I’d glumly tell Nick after the race—I did not pass a single person during the entire 3.1 miles! I suppose that’s what I get for starting out too fast. Hmmm, it may be best to revisit the “start slowly” strategy in the future.

However, considering that I’m not in optimal running shape—not having run very much in the last three weeks since leaving for Panama—I was happy with how the race went. It was my 4th best 5k time to date, and more significantly, my 2nd best time at Fort Collins elevation (which is 5,000 feet above sea level).

And the festivities did not end once the race was over, as Fort Collins had a whole day’s worth of St. Patrick’s Day activities, including a parade just a couple of blocks over.