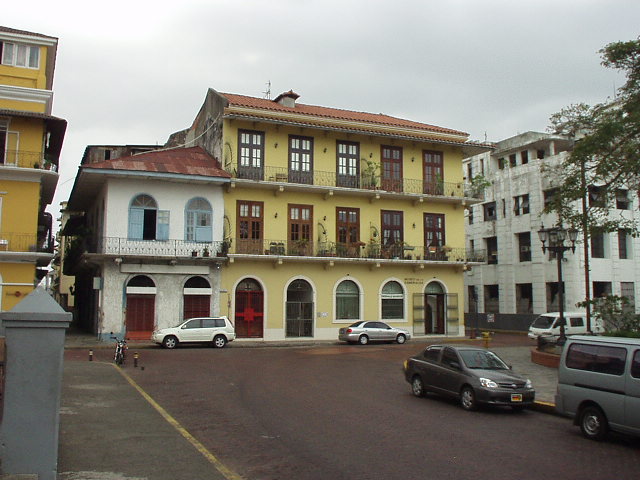 To regular readers of this site, it should be no secret that in general, I’m not a fan of big cities (with the possible exception of Paris). Hence, in planning my Panama trip I limited my stay in la capital to three days. If I were to do it again I probably would have stayed there even less!

The weather in Panama City is very much like that of Saigon, being hot (usually over 33 C or 90 F) and humid—and that is during dry season. I can only imagine what the humidity would be in wet season. The city hosts a lot of skyscrapers—some of which have commanding views of the ocean or canal, so the skyline is quite nice especially when viewed from the harbor of the Casco Viejo (San Felipe) area or the Flamenco Marina.

The roads have an interesting mix of vehicles. Artsy-but-antiquated buses belch out black clouds of foul-smelling smoke, but most of the other vehicles are compact Japanese or European imports. (Heh, imports… what am I saying; there are no “domestic” vehicles in Panama because as far as I know, Panama doesn’t produce any vehicles.)

Panama City is a center of wealth in the country, so spotting a BMW or Mercedes here and there is not too unusual.

Casco Viejo—one of the trendiest and historic neighborhoods in la ciudad—is pretty nice, reminding me of San Francisco’s (California) Marina district. Currently, there is renovation of many of the buildings is underway, so there’s an interesting juxtaposition of just-painted buildings by a few run-down derelicts.

Of course, when you are in Panama City you should visit the canal, which was one of the greatest engineering feats of the 19th and 20th centuries. I did a yacht tour on the canal, but in retrospect would have been perfectly content just taking a taxi or shuttle to the Miraflores Locks to watch the ships enter the locks, and also visit the museum there. Would have saved some $ over the yacht tour.

Regarding city life, there are lots of dining and shopping opportunities around as I guess there are in most big cities. I avoid shopping like the plague, however, so I have really nothing to comment on that.

One thing I dislike about many large cities is that there is trash everywhere. This is actually true in many small towns in Panama, too, but especially so in Panama City.

During my last couple of days in la ciudad, part of my nose was running, perhaps due to the air pollution there. It cleared up when I returned home to the clean mountain air of Fort Collins, Colorado.

If I were to do it again I would have stayed in Boquete longer.