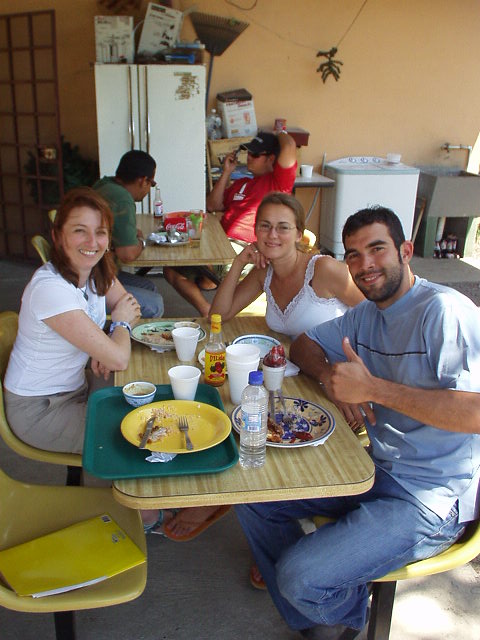 “One thing about Panama,” I remarked to Tori shortly after spending $1.75 for a plate of arroz, frijoles, and pescado, “is that it seems like it is almost cheaper to be eating out all the time than to be buying groceries.”

Indeed, if you go to the supermercado, most edibles seem to be about the same prices as those in the U.S., especially gringo food. Example: a can of Planter’s cashews fetches around $3.50, a box of cereal around $3.00, and Ritz crackers around $2.00. A 1-liter bottle of water fetches around $0.75.

Even produce can cost as much or more. I bought a couple of nectarines, and they cost $0.39 each. That works out to be about $2.00/pound. Exceptions include produce grown in Latin America that need to be imported into the U.S., such as bananas. I thought bananas in the States were already pretty cheap ($0.39/pound at the Sunflower Market in Fort Collins), but they go for half as much, or $0.19/pound, in Panama City.

Panamanian processed foods are also generally less expensive than their gringo counterparts. For example, a box of local granola bars went for $1.19 vs. $2.50 for the Quaker-brand variety. Galletas (cookies) can cost significantly less. One advantage of the locally processed foods is that they also seem to contain a lot less sugar. At least they taste that way!

That said, even some of the local stuff can be priced pretty high. Witness a small bag of candy sporting a gassy elephant on it. I was going to buy some many because of the hilarious packaging as opposed to the candy, but it cost $1.55. Hence, I took a photo of it instead.

On the other hand, eating out in Panama is almost always más barato than in the U.S. My entire time in Panama, I never spent more than $6 on a whole meal, and I usually spent $2-4. The best deals are at the we’ll-scoop-food-out-of-trays-and-put-them-on-your-plates diners. One example of this was Nelvis Coffee in Boquete where I had the aforementioned $1.75 lunch. It seemed to become a favorite of students and staff of the Habla Ya language school I attended.

What constitutes Panamanian food? Well, to be honest, it is fairly bland, usually consisting of rice and beans. In contrast to Mexican food, tortillas and hot sauce are rarely used. However, plantains are used in several items. One great side treat are fried plantains. They are dee-lish! They may not be the greatest for your arteries although I’m sure they are healthier than French fries!

Another thing worth mentioning is Panamanian beer. There are four main brands: Panamá, Balboa, Atlas, and Soberana. Of the four, Tori and I thought Panamá was the best, with maybe Soberana being a second. Atlas and especially Balboa taste a little watered-down, very much like Budweiser.

The alcohol content of all local beers is limited to 3.8% by government decree. Someone had told me this was because “people in the country like to fight when drunk, so this helps people stay sober a little longer.” Considering I did not witness any brawls while in Panama, maybe it works.

One great thing about beer in Panama is that it is generally cheaper than bottled water! In the supermarket, a can of Panamanian beer will run around $0.35; in a restaurant, a bottle $0.75-1.25 vs. $1-1.50 for bottled water. Tap water is safe for everybody in most of the country, however, and is served freely in restaurants.