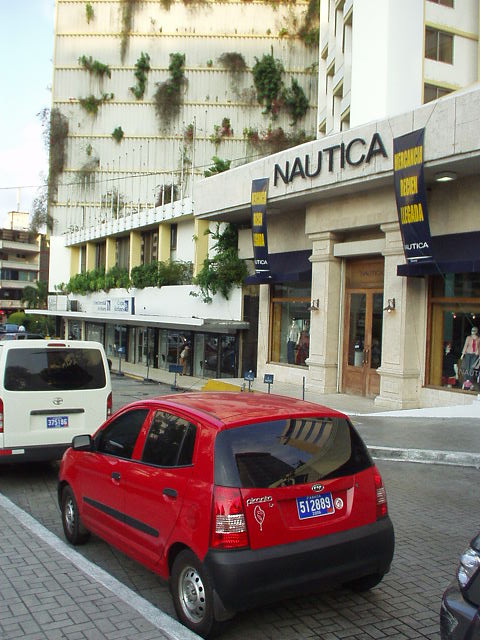 Being part of the Americas, you may suspect that Panama is overrun with large gas-guzzling behemoths or at the very least have a substantial portion of their cars christened with a GM, Ford, or Chrysler moniker. I was surprised, then, this is not the case!

In fact, while there are some SUVs on the streets along with a few small cars from the Big 3 (e.g., Chevy Cavalier, Dodge Neon, and not-available-in-the U.S. Chevy Spark), the majority of the vehicles there are Japanese compacts with many Korean and European cars thrown in the mix.

Toyota and Nissan has a particularly large presence, including numerous 4-door compact sedans from the 80s and 90s like the Corolla and Sentra. Surprisingly, Hondas are rare sights—my entire time in Panama, I only saw two Civics. I even saw more Mitsubishis, Suzukis, and new Daihatsus—the latter really surprising me because I thought the company went out of business in the early 1990s! (Apparently, Daihatsu was taken over by Toyota in 1999.)

Korea is also well-represented, with many Kias and Hyundais on the streets. I don’t think Daewoo sells any cars with their badges on them, but the Chevy Spark is based on the Daewoo Matiz which is ubiquitous around southeast Asia.

One genre of automobile that seems to be popular in Panama is the supermini, which includes the Chevy Spark, Kia Picanto, Volkswagen Fox, and dozens more. All of these cars are smartly styled in the Euro-mold, and I wish they were imported into the U.S. In addition to being easy to park and inexpensive to run, they achieve as good gas mileage as many hybrid vehicles. For example, the Picanto with its 60-something horsepower can get upwards of 50 mpg. I also sat in a Chevy Spark taxi and it seemed plenty enough for all but the obese (which admittedly there are many more of in the U.S. than Panama).

Larger (but still compact) five-door hatches include the Nissan Versa, Suzuki Swift, and Toyota Yaris. In the U.S., one can only buy the Yaris sedan and two-door liftback; too bad.

Other makes that Panama is lucky to have include Renault (of France) and Skoda (of the Czech Republic). I also saw a few BMWs and Mercedeses but only in Panama City, where there are people wealthy enough to afford them.

Most cars have four or five doors, though I did see a few two-door coupes including a Mitsubishi Eclipse, Mazda MX-3, Hyundai Scoupe, and a couple of Mini Coopers (including a convertible). The only other convertibles I saw were Miatas (two of them).

Unlike southeast Asia, there are few motorcycles or scooters in Panama. Quite a few trucks, though. Unfortunately, some car owners have taken to Southern Cal/Stockton syndrome, pimping out their cars with speedbump-scraping ground effects, bellowing aftermarket exhaust pipes, and bass-thumping sound systems. Many cars (even the non-pimped ones) are tinted all around, including the entire windshield.