It’s kind of hard to believe, but I almost had dismissed the opportunity for this super Panamanian adventure completely out of hand.

“It’s just a hike,” I rationalized to Tori en route from David to Boquete, “and I can go hiking at any time. So why pay money to go hiking?”

Thankfully, she set me straight right away. “I’m really surprised you don’t want to do it,” she protested. “I thought for sure you would want to hike the highest summit in the country?”

Volcano? Highest summit? Somehow I had overlooked those parts.

Later that evening, we met up with Habla Ya‘s director and co-founder, Carlos, and his lovely girlfriend, Anna, who filled us in on the rest of the details over dinner. Carlos would provide all of the camping equipment—sleeping bags, sleeping pads, tents, stoves, cookware, utensils—and even arrange for an ATV to haul up that gear to the campsite for us. Transportation would be arranged to bring us to the volcán and even partway up the mountain. We’d hike up to the top, camp overnight, and hike back down, hopefully seeing a great sunset and sunrise in between. The total cost for this weekend adventure: $45/person. All we’d have to do is bring some warm clothes, some food, and at least two liters of water.

“We’ll think about it and let you know tomorrow,” I told Carlos and Anna before departing for the night. But Tori and I had already heard enough. We were in.

A couple of hours after meeting up at Habla Ya with 11 others (see list of participants), we were bouncing around in the pickup bed of a blue Dodge Ram from the 1970s, jolted by every rut and stone encountered on a technical off-road trail that constituted the first part of what otherwise would have been a long, steep hike.

It did… for about an hour and 45 minutes in which it covered a rugged and rocky four kilometers. After that, a few of us decided that hoofing it on our own two legs was not only preferable to getting body slammed on the hard pickup bed of the truck, but possibly faster. This included Andrea, Anna #2, Bryan, Mario and me.

“We’ll have camp ready for you by the time you come up,” said Peter.

Ha! Not quite. After 45 minutes, the five of us hikers were so far ahead of the truck that we sat on the side of the trail having a makeshift lunch of Mani Pasas (peanuts and raisins), pineapple slices, and sandwiches.

“¿Por qué están yendo tan despacio?” I teased the truck’s occupants as they finally caught up to us. We then let the truck get a nice head start before rising to our feet and trudging up the trail again.

It was not long until we saw the Dodge Ram again, spinning its wheels while futilely trying to go up a sharp 45-degree embankment.

When the hood of the truck was lifted and the driver was making some carburetor adjustments, I knew that was the end of it: the volcano trail proved to be too tough for a 1970s 4X4. It was time for everyone to get out and hike the rest of the way to the top.

The advantages of being multi-lingual were underscored soon after.

With up to 11 languages spoken within our group, we were a virtual delegation of the United Nations. At one point, Andrea, Anna #2, Bryan, Mario, Tori and I were walking together. The ensuing conversation went something like this:

Andrea made a comment to Anna and Bryan in German. Anna then reiterated the same thing to Tori, but in English. Tori then passed this on to me in English, and I then responded by making another comment to Andrea and Mario in Spanish.

After the circle was completed again, Tori laughed and exclaimed, “That was classic!” And another: “I wonder what got lost in the translations!”

In a similar vein, I spent a good part of the next couple of hours trying to flirt with the sexy Swiss gal… in Spanish.

My español was dangerous enough to learn that Andrea was—remarkably—29 (as you can see from these photos, she could easily be mistaken for a 21-year-old). She became fluent in Spanish by living in Chile for a year and Ecuador for 9 months, but lives in the city of Chur in eastern Switzerland where the summers are pleasant (and sometimes really warm) and the winters somewhat mild. As an occupational therapist she rehabilitates patients with wrist injuries. And yes, as far as I could tell she was solo, and definitely unmarried.

Alas, she also seemed remarkably unresponsive to my flirtations, although it no doubt did not help that I mangled a few words at the worst moments, such as calling her belleza instead of bella!

I was still at it when, one kilometer from la encima we reached the campgrounds and began erecting our tent. (You can imagine I was very pleased when I learned that she would spend the night in the same tent as Tori and I, as that meant there would two women to help keep the tent warm. HOW LUCKY!!) As she—the experienced camper that she was—deftly threaded the poles through the tent, I told her about my admiration for her strength, as she clearly was the strongest hiker of all the others. She didn’t even look remotely tired all day, as if she was taking a short stroll through the shopping mall.

“Soy acostumbrado,” she said in her melodious feminine voice. Ah yes, I suppose the Swiss Alps would do that to a girl. “Soy viejo, pero por lo menos soy fuerte,” she continued.

Good thing she was strong as we still had that last kilometer comprising the final push to the summit of all of Panama. So after an hour, we were hiking up and over the clouds, surrounded by dramatic, panoramic mountain views 360 degrees around us that were punctuated by the pinkish glow of a mesmerizing sunset.

Carlos was likely correct when he suggested a few days earlier that this spot had the most preciosa views in the entire country.

Mother Nature still had some more treats up her sleeve after the night had come.

First, there was a full moon. But not for the entire night. As a bunch of us worked on getting a campfire going, someone exclaimed, “Â¡Un eclipse de luna!”

I can’t even remember the last time I had witnessed a lunar eclipse (though, apparently, there are at least two lunar eclipses every year), but it was absolutely appropriate to have one on this night. Magical for sure.

We raised a toast of red wine (yes, we even had red wine!) as this occurred and two pots full of stuffed tortellini simmered on propane stoves. We kept our toes toasty by the campfire, shifting our position around the flames as a capricious wind blew smoke in different directions every few minutes.

Everyone on this night was happy aside from one hiker comprising a two-man team who had succumbed to altitude sickness. “We came from the lowlands of the U.K.,” said his friend Sebastian, who was fluent in German in addition to English, “and my friend was complaining of extreme fatigue, headache… just a really bad feeling.”

Carlos generously offered the guy a spot to sleep in one of our tents, while Anna #1—the doctor-to-be—whipped up a concoction of grapefruit tea for him. He soon dozed off and the day’s ordeals were becoming just a memory.

Most of us agreed that the sunrise was even better than the sunset. Back at camp, there was also agreement about one other thing.

“I got NO sleep last night,” remarked Carlos, who was so exhausted from being unable to snooze that he was not one of the people who hiked back to the top.

Indeed, even I—whom Tori to this day teases for falling asleep during shoot-em-up action flicks—was unable to sleep from 2:00-5:00 a.m., as a bunch of people (mostly from other groups, but also the Mexicans from our group) were partying outside our tents, including making monkey noises. For the entire night. Carlos, apparently, each hour had even asked them to keep it down as people were trying to sleep, but they refused.

Carlos explained, “There are thoughtless people in this world. But I was proud that I controlled myself from really lashing out at them. Even though they deserved it.”

I agreed, saying, “I too was proud of controlling myself and not going around camp yelling at them in broken Spanish.”

“Darn, now that is something I would love to have seen!” Anna #1 said to laughter.

Ah well, there would be time to catch up on sleep later that night, back in Boquete.

As Carlos loaded the ATV with camping gear, Tori and I got a head start on the 13.5 kilometer trek back down the volcán.

Aside from myself slipping and falling, oh, half-a-dozen times (“I’m okay, I’m okay!”), the downward hike was pretty uneventful until a couple hours later, when Anna #1, Andrea, Carlos, Janeth, and Peter suddenly jumped out in front of us on the trail. Apparently they had found a shortcut.

Half-an-hour later, Tori and I had caught up to them, as they stopped to discuss a “situation.” Apparently, Peter had earlier seen a couple bags of our group’s camping gear on the trail, perhaps due to coming off of the ATV. Not being sure what to do with them, he placed them on the side of the trail, and about a mile later, told Carlos about them when they ran into each other again.

“Ugh,” said Carlos, “I’m going to have to go back up for them.” He proceeded to hand over his pack to none other than the sexy Swiss, who had immediately volunteered to bring it down the mountain for him while he searched for the bags. Fuerte, I remembered.

In the next hour, we all had reached the bottom, including Carlos who had victoriously found the two bags. We climbed into the minivan that awaited us, and giving Volcán Barú one final glance over my shoulder, I thought just one thing:

I can’t believe I almost did not sign up for this.

March 15, 2007: While in Panama City, I wrote a short essay for NextNC, a weekly Northern Colorado publication. The write-up is here (PDF, 1.0 MB). Unfortunately, when I alluded to Andrea in that article (not by name), I mistakingly typed “Swedish” when I actually meant “Swiss!” Sorry, Andrea. 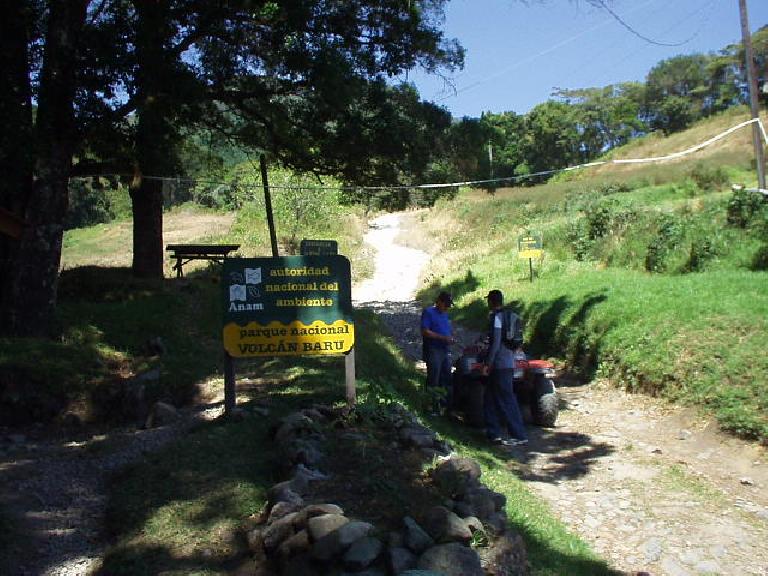 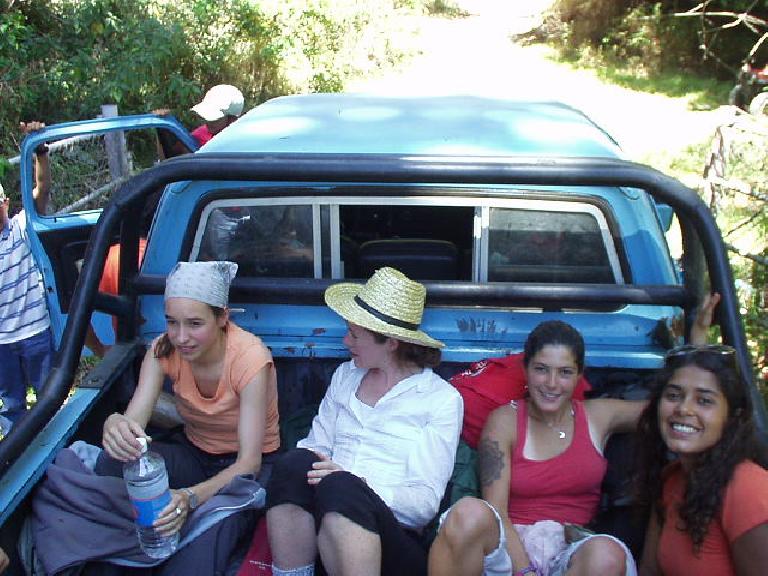 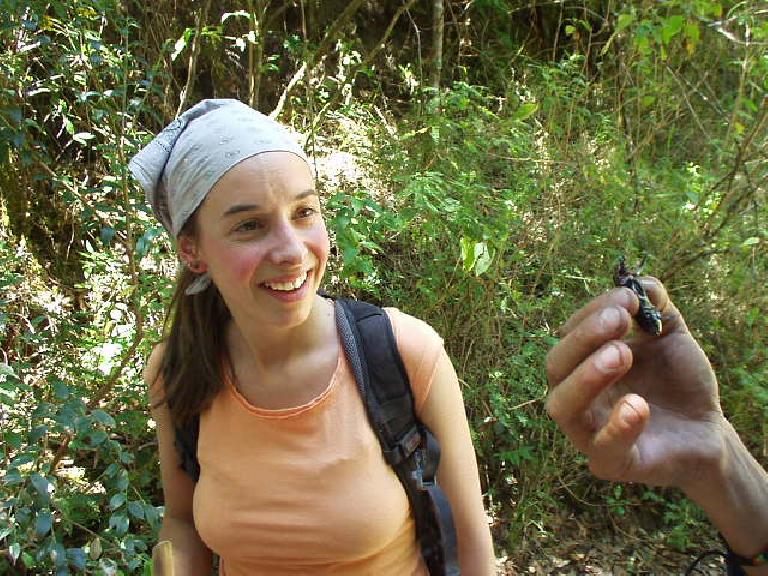 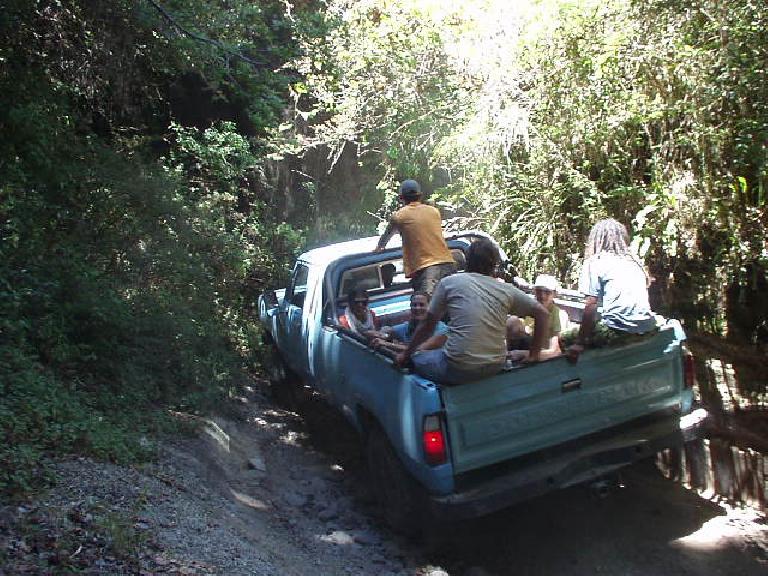 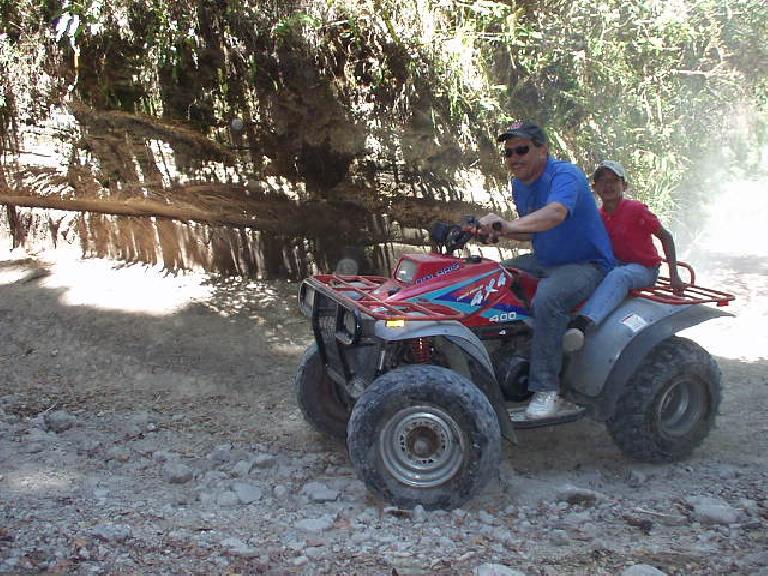 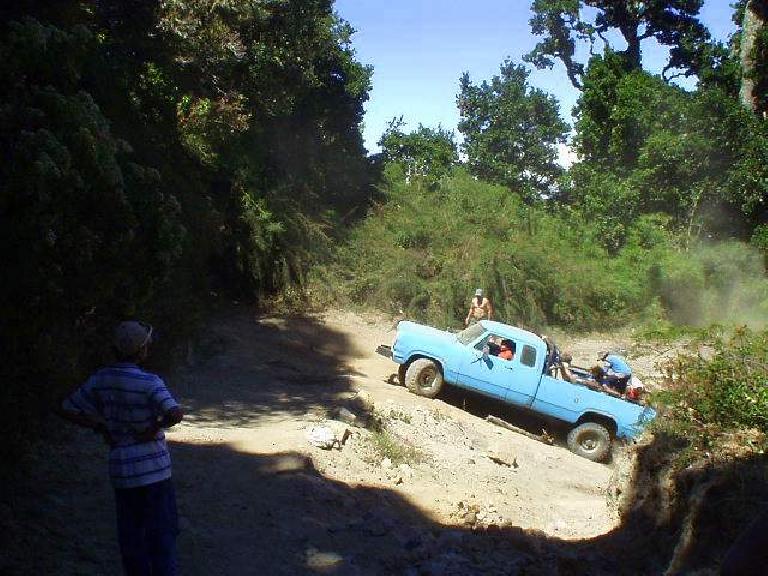 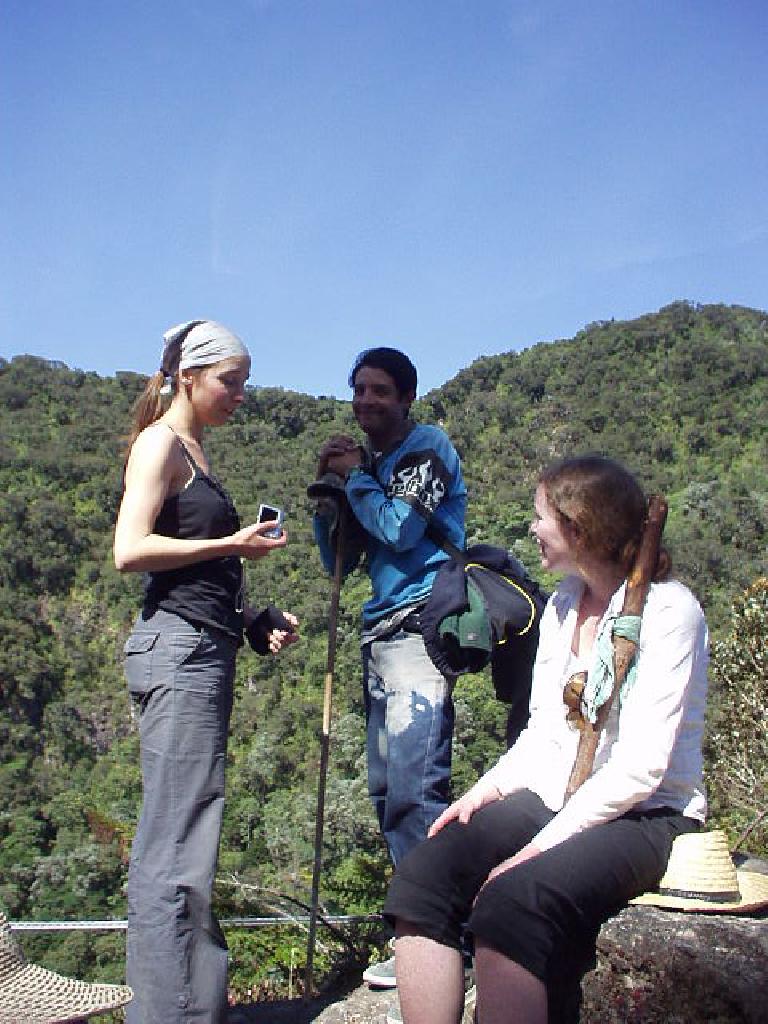 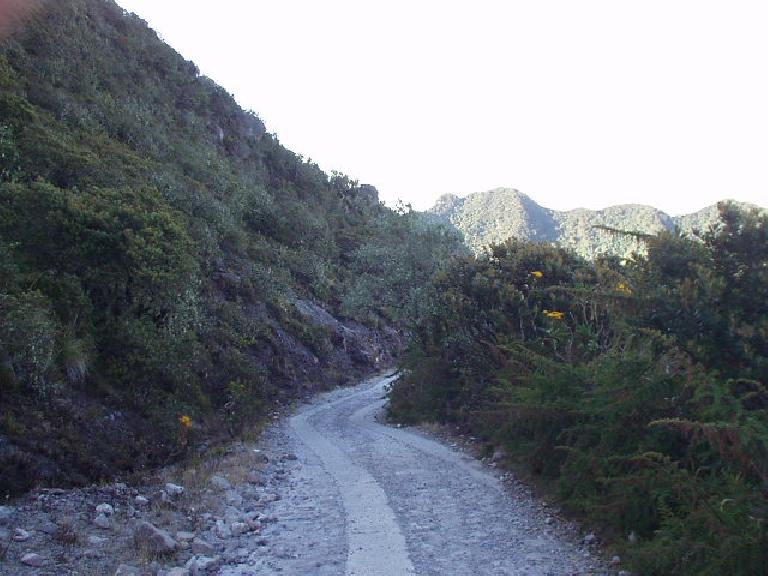 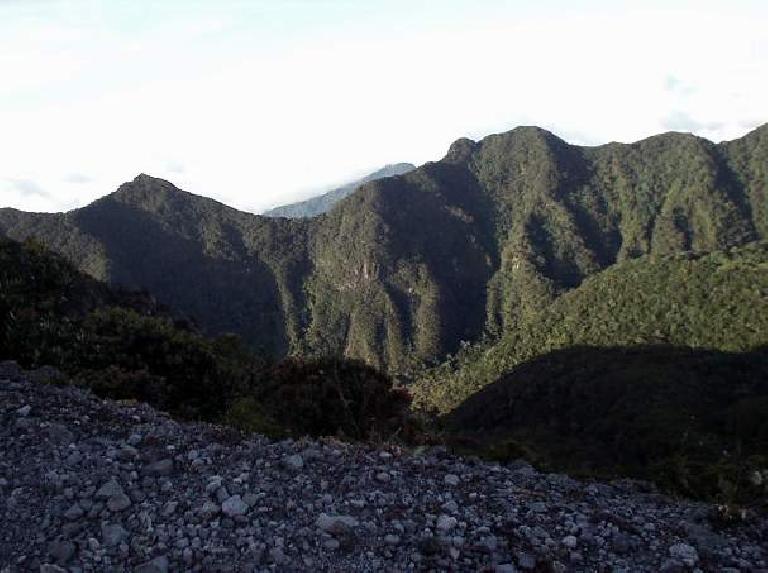 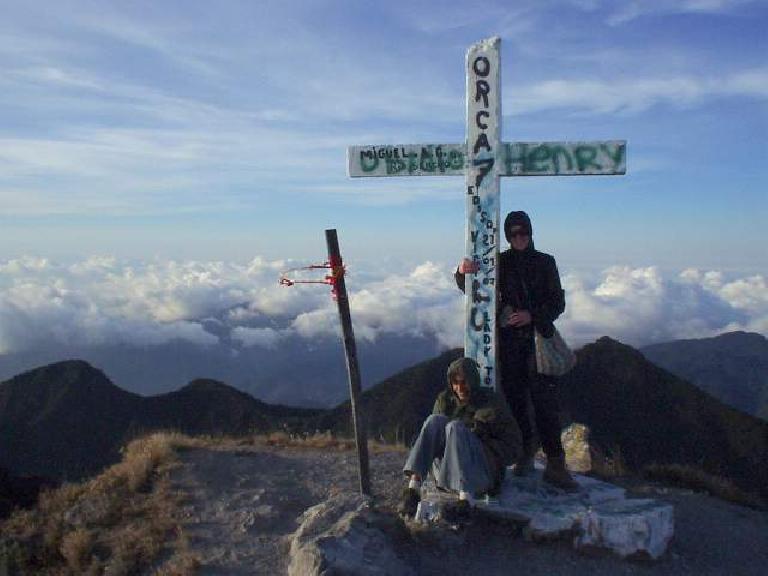 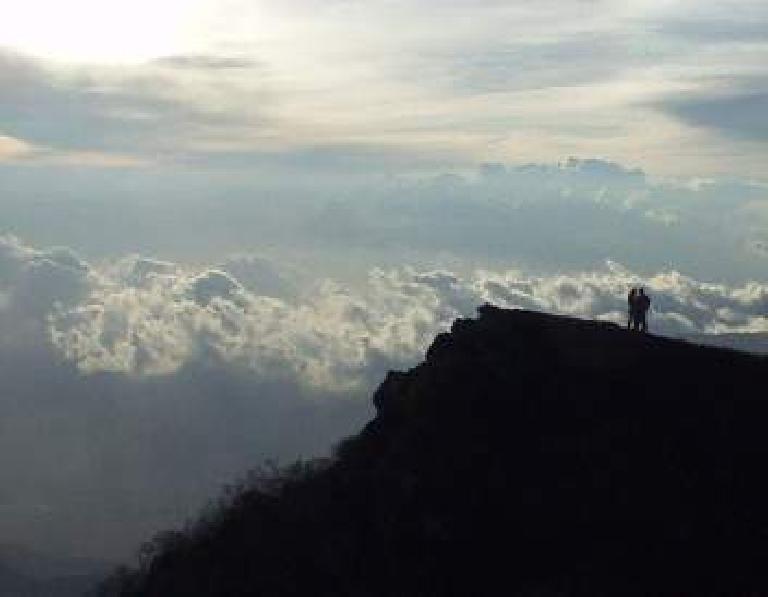 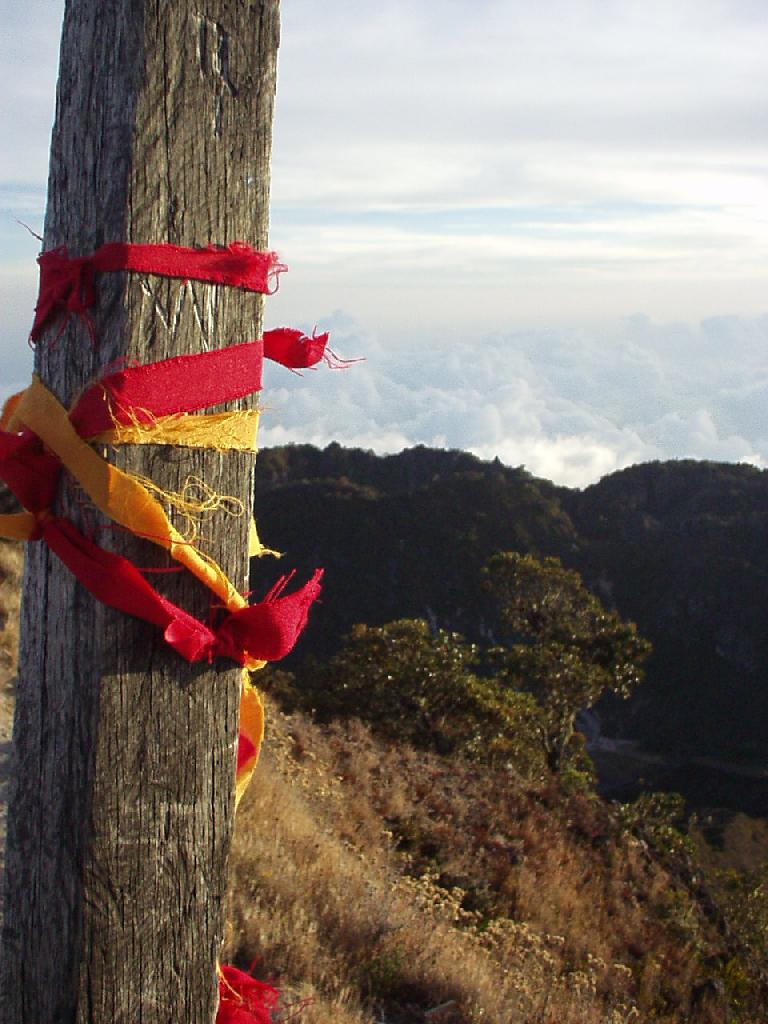 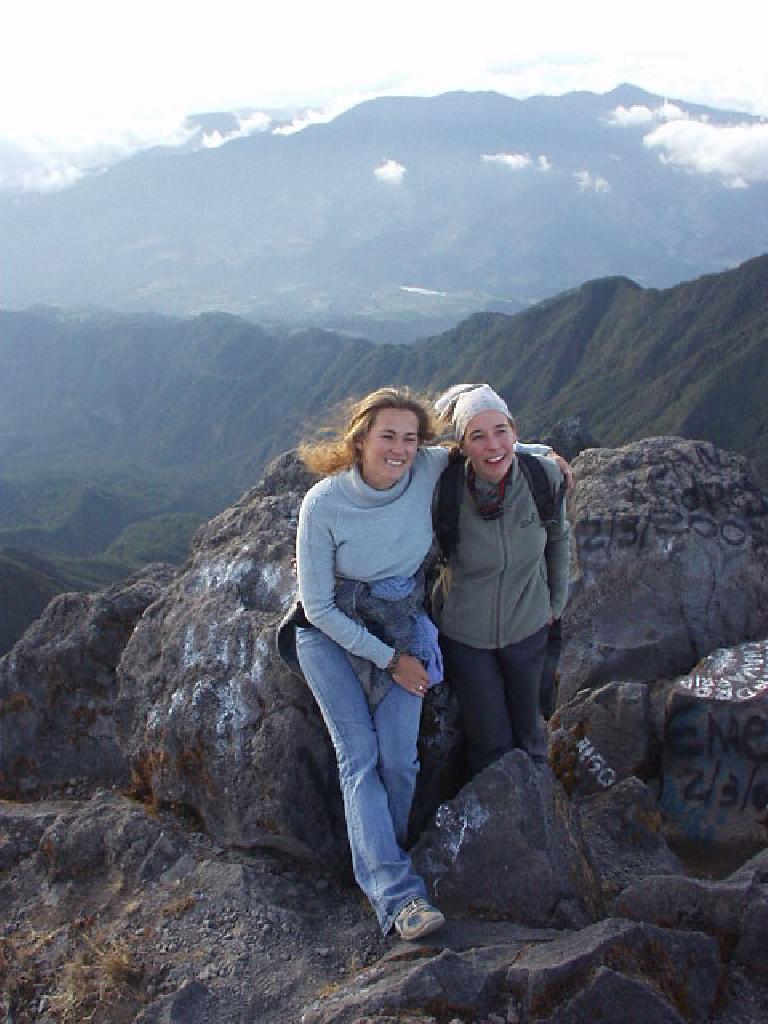 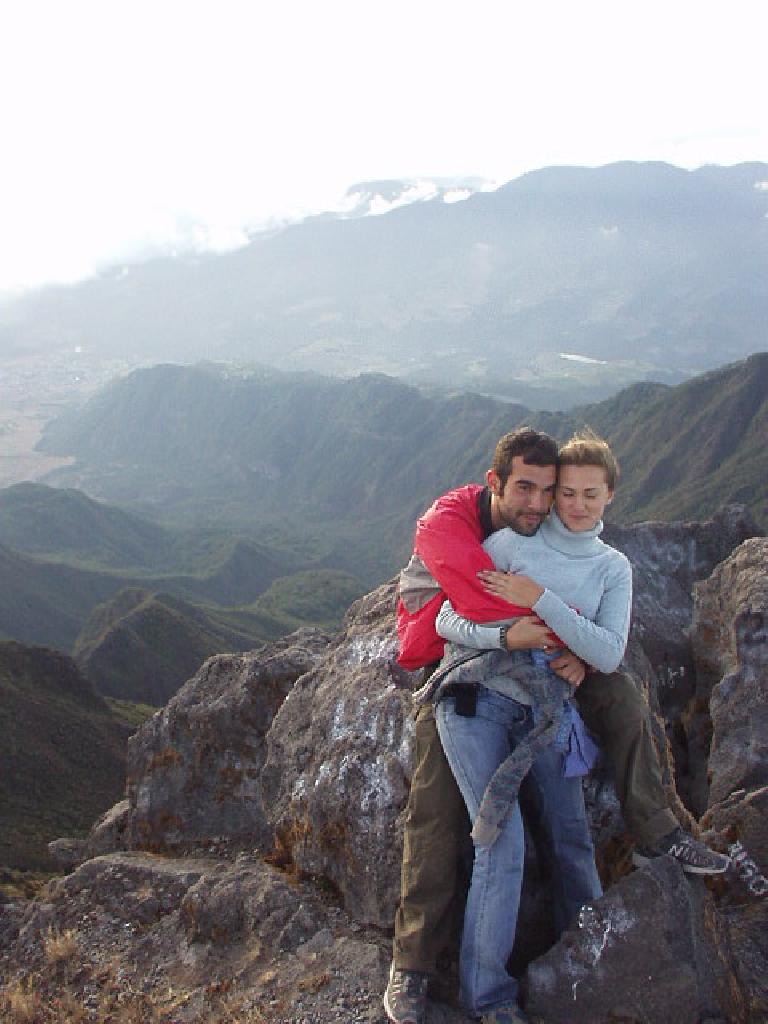 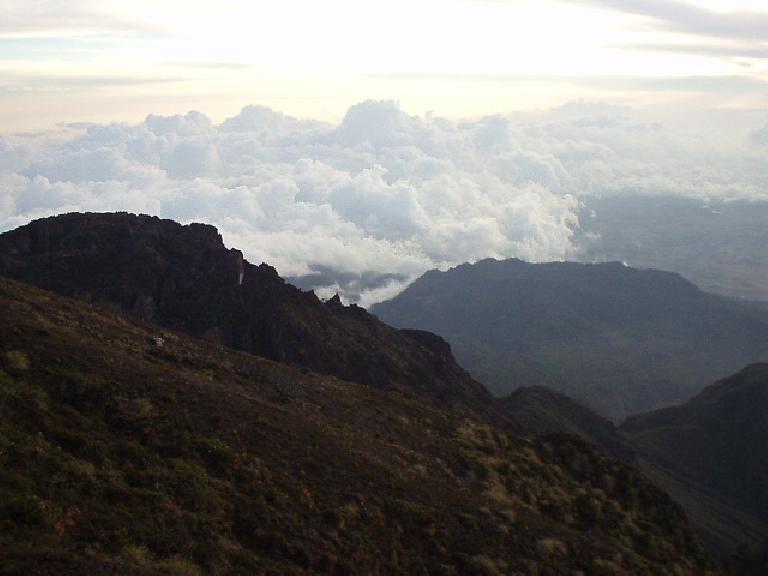 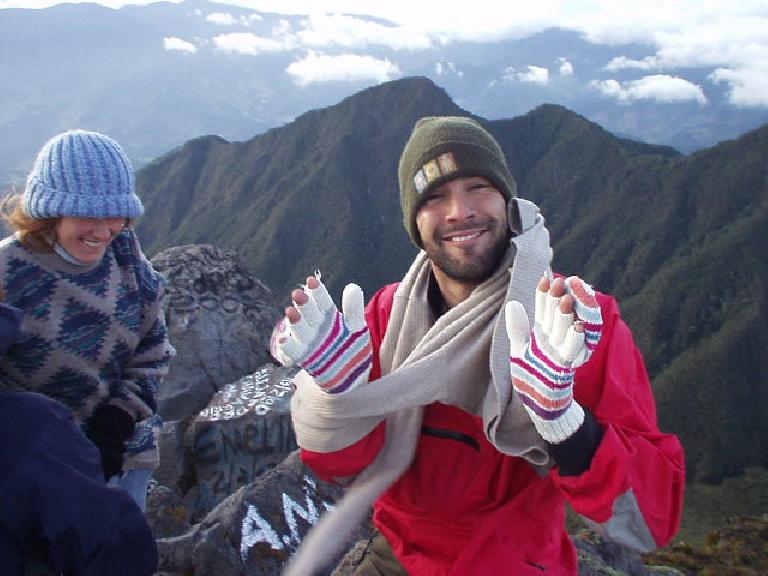 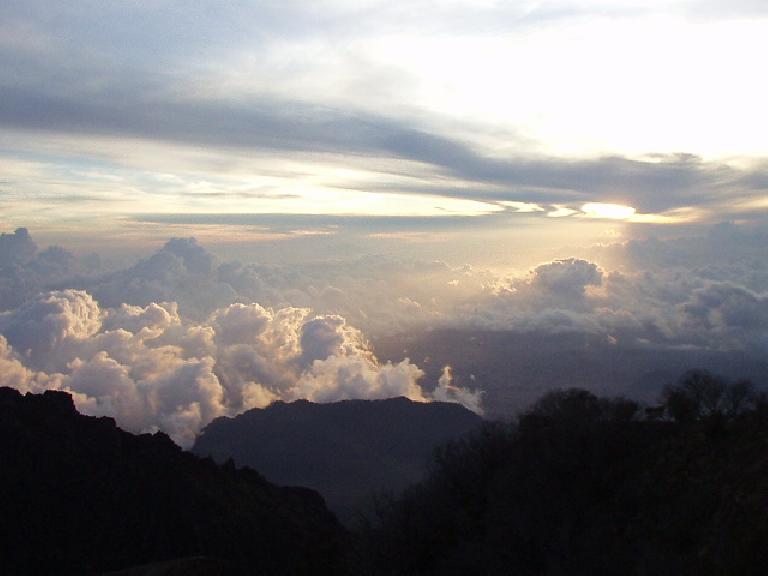 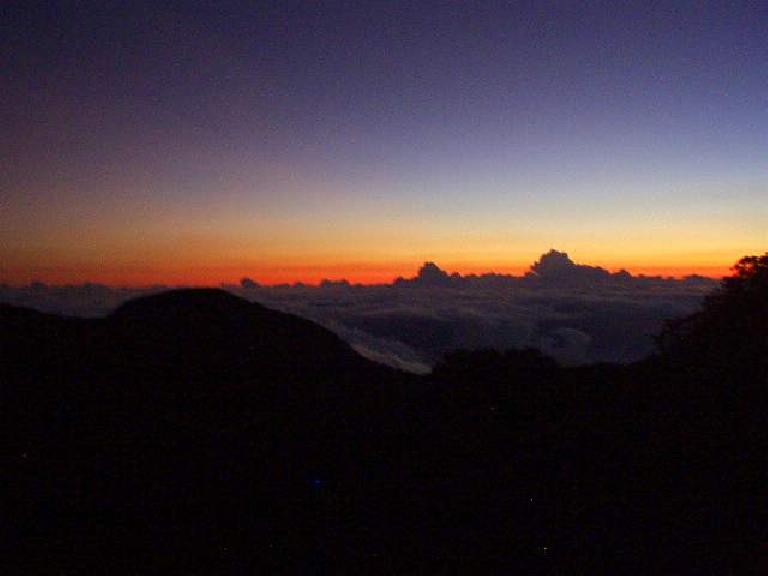 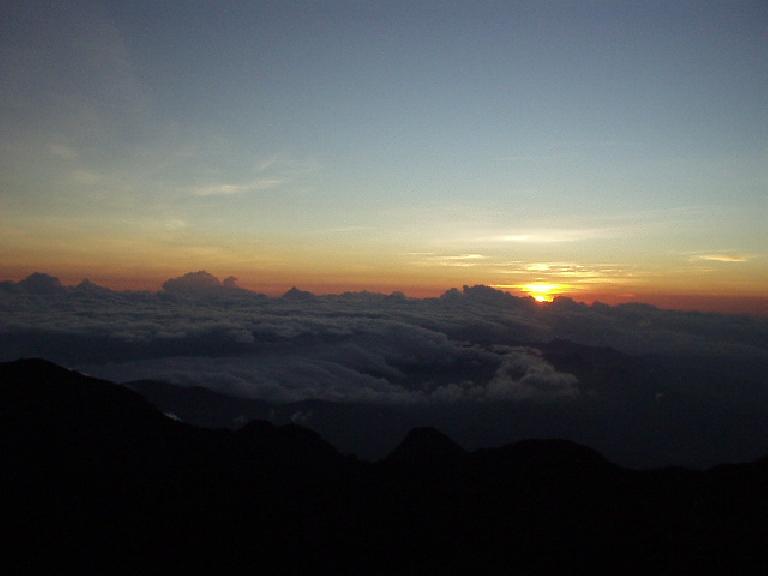 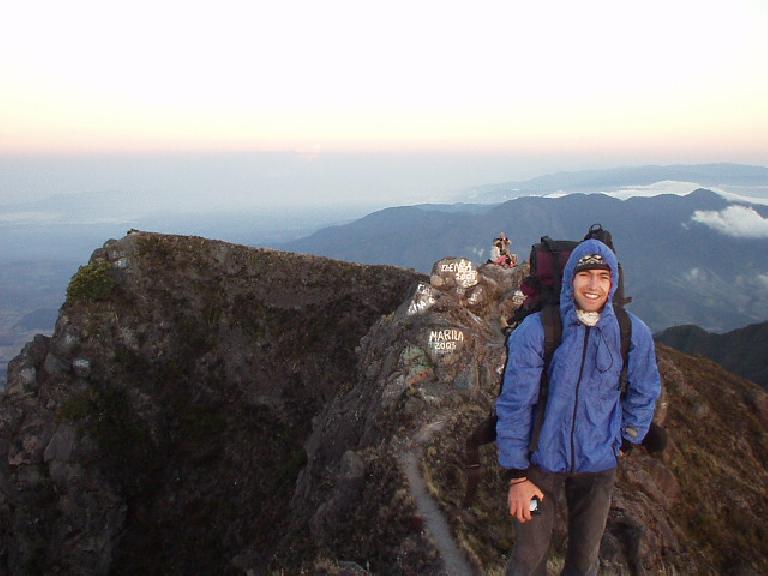 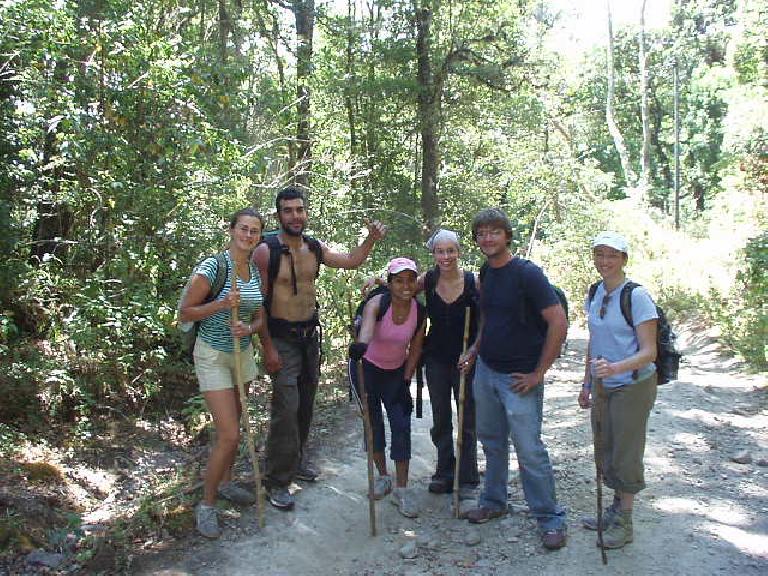 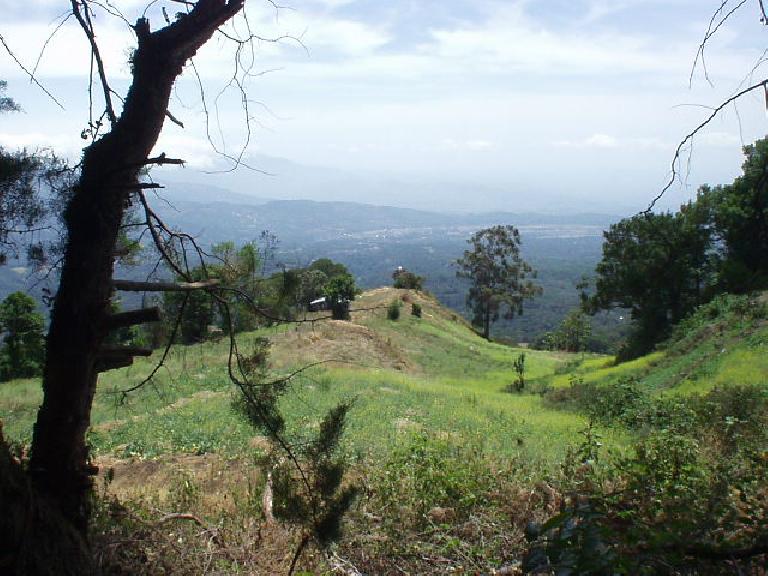 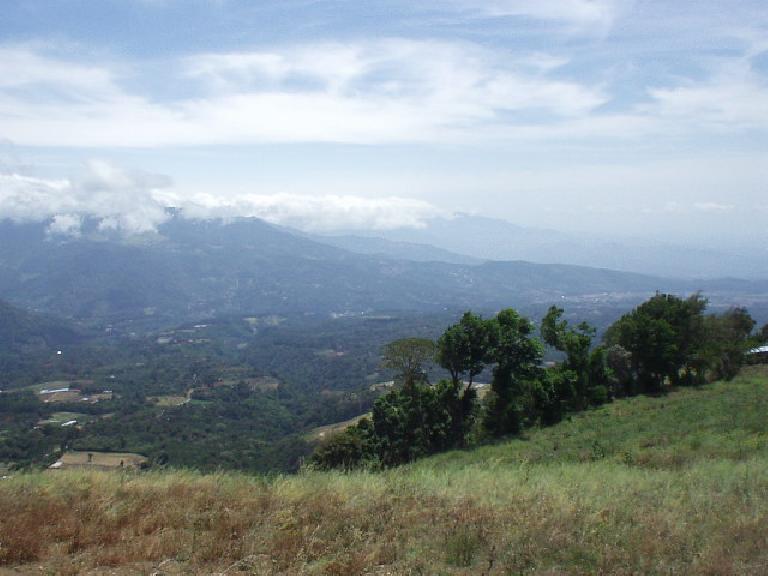 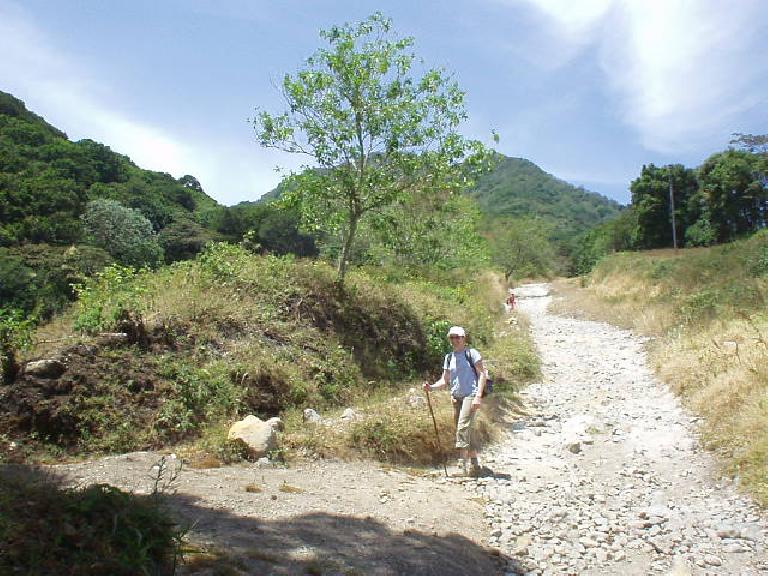 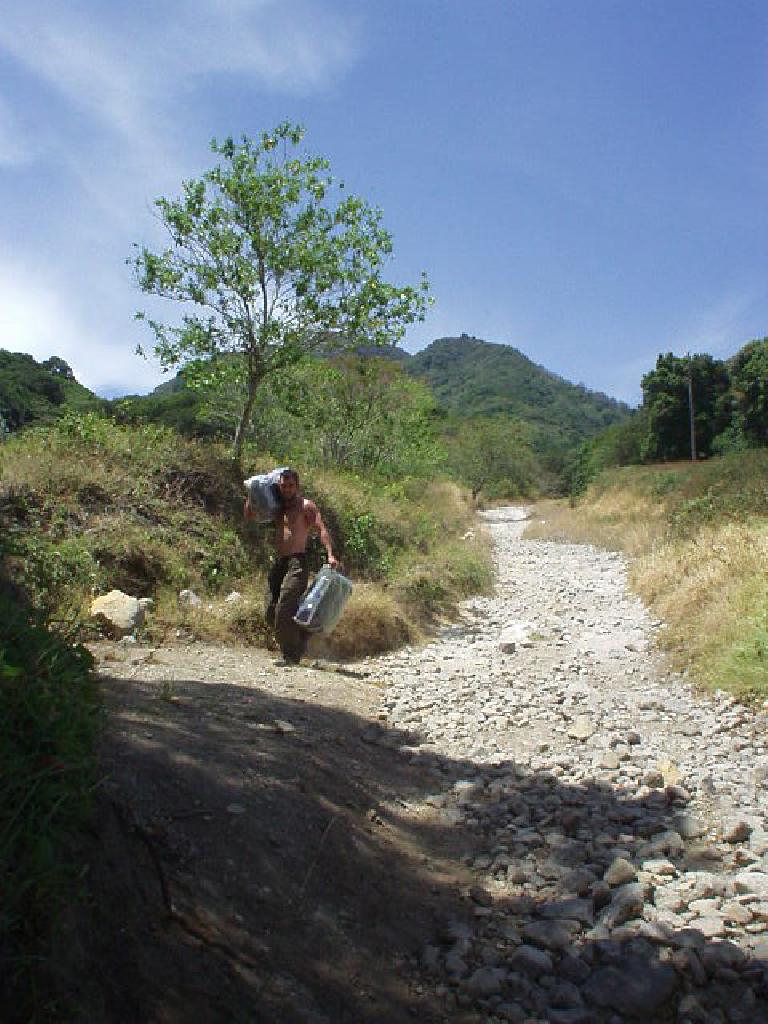 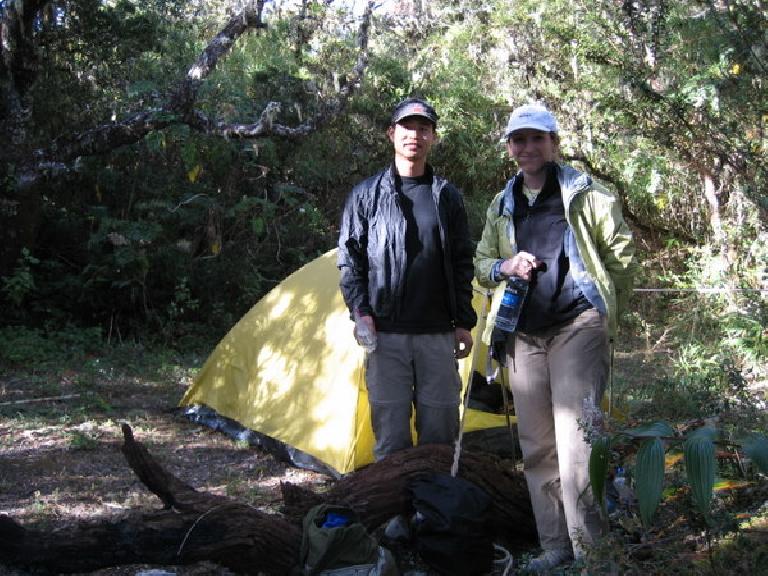