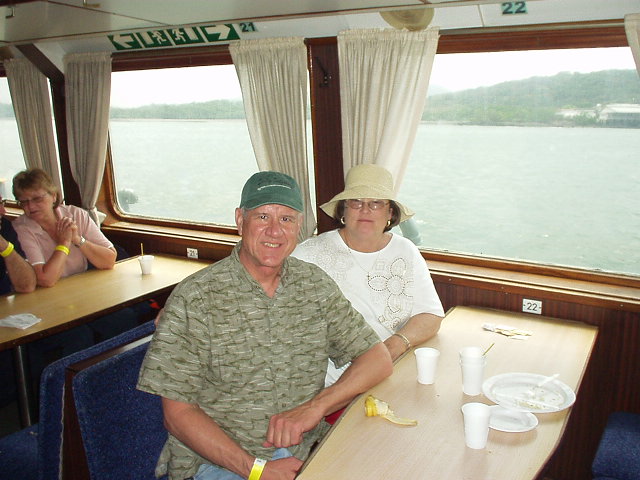 Yesterday, well after I waved goodbye to Tori and some new friends in Boquete, Panama and returned to Panama City, my heart felt a few tinges of sadness and pangs of sorrow.

Boquete, after all, is a small paradisical town nestled within a bowl of verdant mountains, overlooked by a giant volcano and bisected by a wild, rocky river. On a superficial level, it looks a little bit like a shrunken, cheaper Estes Park and feels a little bit like parts of Fort Collins, where a smile and a wave is universal currency. In contrast, Panama City is much like other large cities in the world, a concrete jungle with blaring horns, creepy shadows, too many cars, etc.

“Wish I were in Boquete,” I thought at one point this morning. “Or Estes Park. Or Fort Collins.” This mindset stayed with me all the way to on a bus ride to the town of Gamboa, where I was to commence a tour of the Panama Canal.

That is when something quite remarkable happened.

An elderly man from Gamboa jumped on the bus and started speaking to everyone. “I’m from upstate New York,” he proclaimed in perfect English, “but lived in Panama for more than 30 years now.” He then briefly talked about a book he wrote about the U.S. invasion of Panama and its effects on locals’ lives, and continued, “and in the States I sell the book for $10. But I am offering you the chance to buy the book for $5 and I’d sign it. Does anyone want to buy it?”

I looked around and only one person raised his hand. He was sitting in the seat next to mine.

“Great, where are you from?” the author asked the tourist.

Indeed, can you guess where he was from?

Of course, I would hardly be writing about this if the answer was any less than Fort Collins, Colorado! It turned out that the man, Chuck, and his wife, Linda, had just arrived in Panama City a day ago and will be on their way to Boquete on Tuesday. They will stay there for a week before returning to the Fort.

On top of offering more evidence for what a small world we live in, the couple and I talked for a couple of hours on the yacht we toured the canal on, and no longer was I longing so much to be back in Fort Collins. For a little bit of Fort Collins had come to me.

Love the "smile and wave" comment about Boquete. It is the main reason we are leaving a very comfortable San Diego lifestyle behind and moving there. Nice work on the blog.