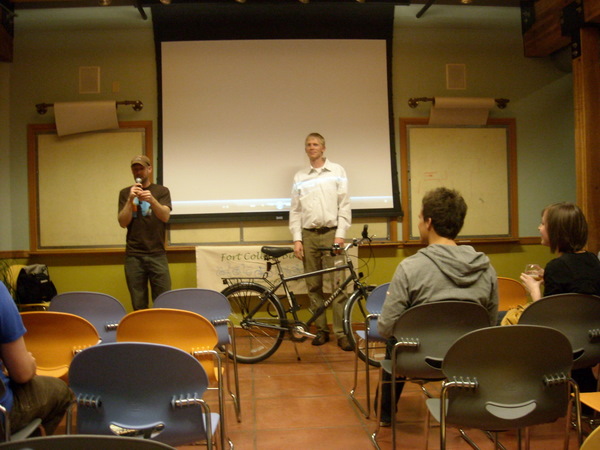 I was on the way to a Wednesday night run with my neighbor when a friend called and asked, “so when are we meeting tonight for the bike event?” Tonight? Somehow I got the date wrong and thought it was tomorrow. So to make the event, I cut my run down to a 2.6 miles so I could get to New Belgium Brewery in time, or at least not *too* late.

Good thing Tori called—otherwise I’d have missed out on a fun evening of beer, bikes, and a documentary/info-session about how bicycles are benefiting the people of Ghana.

How low? Retailers in Ghana typically sell bicycles in good working order for $75 and above, but the VBP sells bikes for about $25. Considering that the average annual income for Ghanians is about $800, that is still a fairly hefty sum but brings down the affordability level enough that a good number of people who really need the bikes can buy them.

“Why not give the bikes away?” is a question often asked VBP. The reasons are two-fold. First, shipping is expensive and at the current $25/bike sales price, half of the sales are needed just to cover shipping costs.

Secondly, “things that are free are not valued,” asserted David Peckham, the founder of VBP. He cited examples of other programs that gave away bicycles in other countries, and the bikes would be thrown off roofs, abandoned, neglected, etc. When one does not have to work for something, he is less inclined to treasure or appreciate it.

The documentary was both entertaining and informative, depicting how bicycles are changing Ghanians’ lives. In Ghana, almost no one can afford to own cars or motorbikes, so the only way practical way to travel long distances is by bus or cabs, which can be expensive. Also, infrastructure is not very good with rough roads that could be sometimes impassable by motorized transport, especially the ones prone to floods.

Bicycles are a solution to this problem. They are cheap to operate and cycling is a far faster and efficient way to travel long distances than walking. And when otherwise impassable (for cars) sections of road are encountered, one can just pick up his bicycle and carry on.

Being able to travel long distances opens up opportunities for jobs, the ability to fetch needed supplies, and potential for greater prosperity. It also enables people to visit each other more frequently.

Movie aside, the event included pizza and beer by New Belgium, a silent auction to raise money for VBP, and a raffle. I told Tori I was feeling lucky today, and indeed I was as I won a T-shirt and $10 gift certificate good at the Choice City Butcher. Since admission was $10, I actually came out of the event with a profit—though not really because I will end up giving the T-shirt away because it was size XL, or about three sizes too large for me.

Another lucky soul won a Breezer commuter bike, shown in the photo above. So at least on this night, it wasn’t just Ghanians who benefited from the Village Bicycle Project—some Fort Collinsers did as well.

Interesting re: how free things are not perceived as valued. ↩ Reply

From the look of the picture, these guys probably lost money in this fund raiser. ↩ Reply

Ha, I can see how from looking at the photo, one would think the organization lost money in the fundraiser. Good thing the room was actually filled to capacity during the event; most of the people left the room before the end of the raffle in order to get a jump on the line for beer. :) ↩ Reply