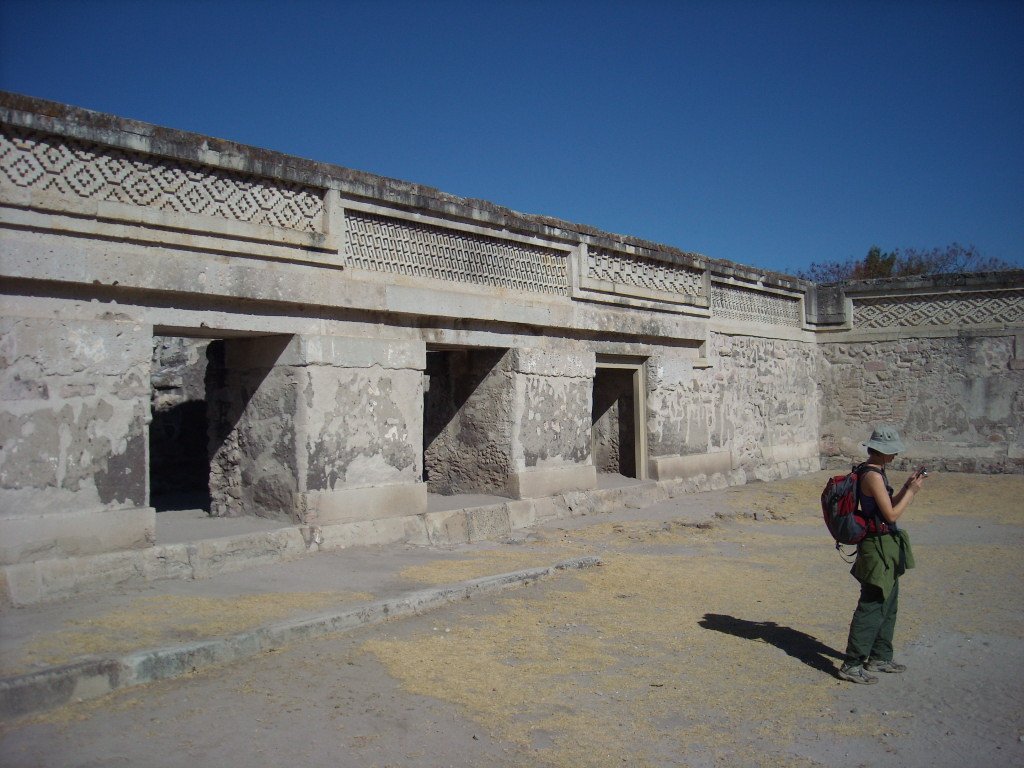 Today we headed to Milta which (according to Wikipedia) is “the second most important archeological site in the state of Oaxaca, and the most important of the Zapotec culture.” Here we explored ruins with a 70-year-old native tour guide who was so proud of the local history that he talked on and on for over an hour. Afterward we ate flautas and quesadillas that were grilled outside the ruins, a welcome reprieve for my weary Spanish-to-English translating mind.

Sarah absolutely loved the tour, but what turned out to be more exciting for me was a 1.5-hour, second-class bus ride back to Oaxaca.

We already had a bizarre taxi ride from Teotitlan del Valle four days prior. Hence, I was actually looking forward to a nice and peaceful ride on Mexico’s version of the chicken bus back to the city center of Oaxaca del Juárez. When Sarah and I boarded it in Mitla, we were able to get a bench seat in the front row. We were fortunate because after a few more stops, the bus would be more packed than a chicken coop and was strictly standing room only for additional bus boarders.

Within 15 minutes I was already asleep and despite the Mexican chatter around me, I snoozed peacefully for the next 45. When I awakened there was commotion at the back of the bus while the bus was idling outside a store. I was about to fall back asleep when I noticed that someone was heaved out of bus from the rear exit like a sandbag tossed out of a delivery truck.

Within a few seconds, a skirmish outside the bus turned into a Mike Tyson-esque fight with many punches thrown but no ears bitten off. The bus driver and his assistant (a man who would open and close the front door) were soon in the midst of the fight trying to break it up. The rabble rousers were subdued with the help of other locals and the bus was eventually rolling again.

As the bus made its way back to Oaxaca, the bus driver’s assistant was joking and smiling. I found this amusing considering that his shirt was ripped nearly two feet lengthwise as shown below.

Sarah asked him (in Spanish) how often this happens after I noted the irony of a sign above the assistant proclaiming him to be “un agente de la paz” (agent of the peace). He replied with a wide smile, “Todos los días.”

Everyday? Who knew being the bus driver’s assistant was such an exciting job?