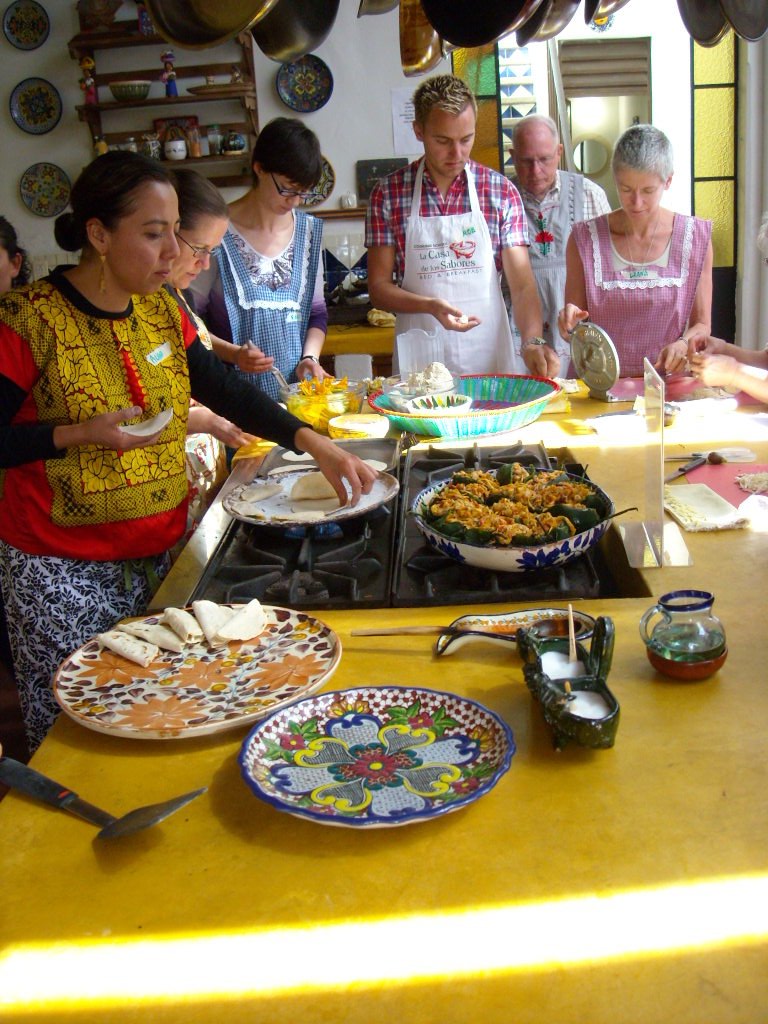 After hiking in the Sierra Norte, we came back to Oaxaca for a lower-key day. First on the agenda was taking a cooking class that included a trip to the local market and making salsa verde asada, sopa azteca, chiles en nogada, and flan de coco. Next, we went down to the Zócalo and looked at exhibits about evolution and earthquakes inside a free museum. Then I attended a wonderfully relaxing late-evening yoga class while Sarah did some shopping. Finally, we ended the night by having dinner at Biznaga—a Oaxacan restaurant where we could finally eat some vegetables—with Ron, an Israeli diplomat whom I met at yoga and invited to eat with us.

For more about the cooking class, here’s a write-up by Sarah.

Felix and I began our day with a jog, as we were running late for the 9:30 am start of our cooking class with Pilar Cabrera of Casa de los Sabores. Pilar was a delightful teacher who was born and raised in Oaxaca and had much to share about food production in Mexico. Our cooking course consisted of an introduction to our menu, an excursion to the local market three blocks away to purchase the ingredients for the day, shared preparation of our meal, and finally, the most important part, the taste test!

Pilar started our course with an introduction to the menu of the day: Quesadillas with quesillo (Oaxacan string cheese), squash blossoms, and epazote, a dark green herb typical of this region; Sopa Azteca, also known as tortilla soup; Chiles en nogada, which are roasted poblano chiles stuffed with a mix of stewed fruits and nuts mixed with shredded chicken; and for dessert, coconut flan.

During the introduction, Pilar explained the items on our shopping list and gave us a little background on food production in Mexico. She explained that it was quite special that here in Oaxaca we are still able to purchase fresh corn masa, the mixed corn meal used to produce tortillas. (As a side note, southern Mexico makes more use of corn tortillas, while northern Mexico more commonly uses flour tortillas in cooking.) In many other regions of Mexico, one can only find dry corn meal mix in the market. Pilar explained that corn production in general has decreased over the past decade or so in Oaxaca, such that there are only two remaining local tortilla makers. Most of the men, who traditionally worked in the corn fields in the region have emigrated to the US in order to make more money to send back home. Domestic corn production is not lucrative enough for most farmers for a couple of reasons – the Mexican government does not pay a lot for corn production and Mexican corn is not price competitive with the cheap imported corn from countries such as the US. This results in a significant change in the culinary experience in the region. Oaxaca is fortunate to still have a lot of local production of quesillo, as the quesillo produced from other regions is deemed inedible by proud Oaxacans.

Pilar took our class on a three to four block walk to the closest market to the school. She purchased a portion of our shopping list from several different vendors. I think I recall observing Pilar purchase cilantro from three different vendors in the market. Pilar does not bargain at the market, as she feels it is not worth it to save one or two pesos at the end of the process. Our purchases included gorgeous baskets of tomatillos ranging in color from light green to a beautiful eggplant purple as well as a couple of varieties of red tomatoes, one of which was characterized by deep folds in the skin that reminded us of heirloom tomatoes in the states. We also learned about different varieties of chiles of varying varieties, ages, and drying processes, that produce the diversity of flavors and hotness that Mexican cuisine is known for. We saw many bright yellow, de-feathered chickens, which apparently get their color from the corn and marigold seeds that they eat.

Once we returned to the school from market, we commenced the roasting, melting, dicing and blending needed to produce our delicious dishes for the day. For the coconut flan dessert, Pilar showed us how to melt sugar in a pan and how to coat the cake mold with the melted sugar, and we blended egg, coconut milk and milk. We diced pears, peaches and apples to prepare the stuffing for the chiles en nogada. Pilar cooked the mix of fruits and nuts in a large ceramic pot until the fruits were a bit dry. To this, we added shredded chicken breast. Pilar’s assistants roasted, sweated (put in a plastic bag to make it easier to separate the charred skin from the flesh), and removed the skin of 15 poblano chiles, which we then stuffed with the mixture of fruit and chicken. My favorite was the tortilla soup, which consisted of a blend of several tomatoes roasted on a comal and baked tortilla chips.
For our salsa, we ground garlic and chiles by hand using a mortar and pestle. Pilar roasted our tomatillos on the comal which we then quartered to put into the mortar for grinding. We could only add a few tomatillos at a time in order to thoroughly grind the tomatillos. For the quesadillas, we pressed our own tortillas made from fresh corn masa, which we baked on a comal. To these we piled on quesillo, squash flowers and epazote, folded the tortillas in half, and put back on the comal for further cooking. We prepared the quesadillas last, as Pilar favors hot quesadillas with her meal.

We sat down for the start of our meal with a shot glass of mescal and a lime dressed in gusano, which is a mix of ground chile powder, salt and worms. Pilar favors the younger, white mescals; the older mescals are more yellow in color. The meal was delightful. I loaded my quesadillas with the salsa verde picante that we prepared and enjoyed two bowls of tortilla soup dressed with guacamole, lime and baked, julienned tortilla strips. The chiles en nogada was like a Mexican charoset with chicken, which was served at room temperature. For the presentation of the flan, Pilar’s assistants added slices of stawberry and kiwi to look like a flower.

The lesson and the meal were an incredible treat; a cooking class with Pilar in Oaxaca is not to be missed if you travel to this region.

These were the items we bought in the market.

Things to identify, not buy: