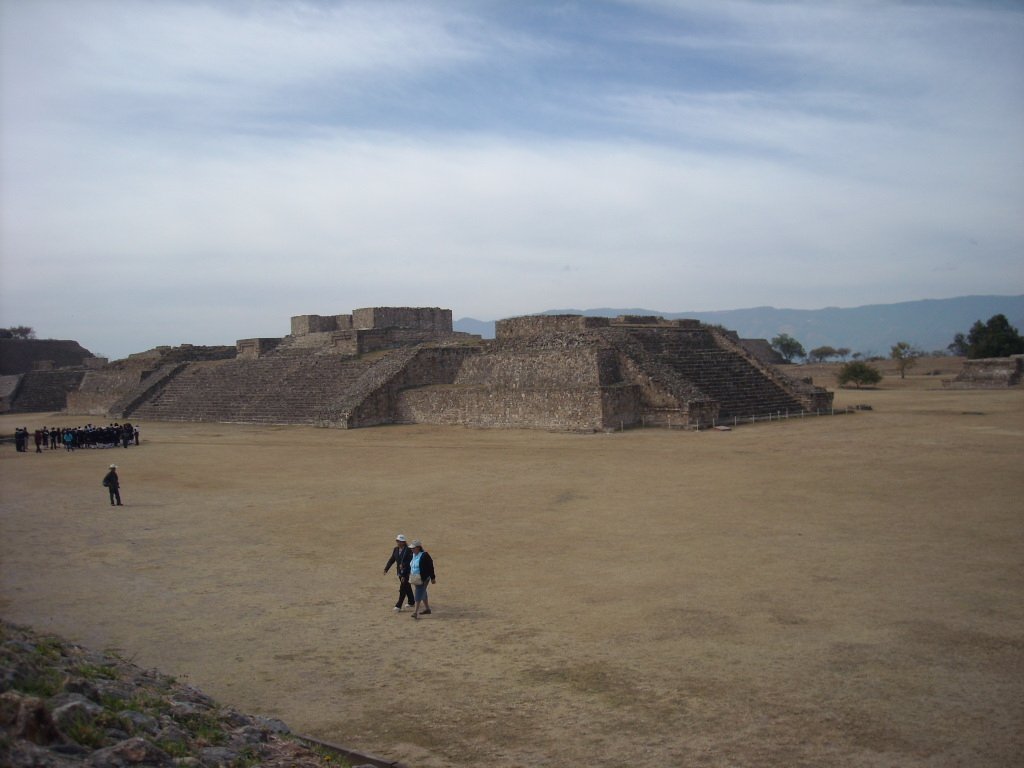 For today’s recap, I am trying something different: turning over the reins to a guest blogger—my travel pal Sarah—for a different perspective of Oaxaca. It also allows me to go back to being a lazy bum. So here’s Sarah’s report:

Day 2 Oaxaca began with a trip to the mercado on la calle 20 de noviembre. There were vendors selling goods of every sort—quesillo (stringy Oaxacan cheese rolled into a ball for sale) and queso fresco; moles of every kind, including black, red, green, coloradito; and pinatas, including Shrek, a blue Power Ranger and a small Santa. Our food and pinata reverie was interrupted by a loud commotion in the middle of the market, a small band squeezed in between aisles of the market playing music in celebration of la Fiesta de la Virgen Soledad, the patron Virgin Saint of Solitude of Oaxaca City. The music was enthusiastic to say the least, but the tune a little off.

Our visit to the market was followed by a trip to Monte Alban, the ruins of the former Zapotec center of power in the region, with construction dating from 200 BC to 800 AD. Que impresionante!! (Una expresion que Manuel me enseno.) What remains of the structures of Monte Alban alone are quite impressive—the bases of residences, walls with drawings depicting the symbol of Monte Alban and its conquests, grand steps to higher locations at the site, and maze like halls of tombs that end in dead end chambers for the dead or for treasures. The site itself is quite bare except for the remaining structures. There are few trees on the hill of the site, and with this being the dry season, the grass in bare and golden.

Following our visit to Monte Alban, we invited Killian from Germany to join us for lunch at Comala, which served up a fantastic three course meal consisting of squash and squash blossom soup, three vegetarian patties, a slice of cake and watermelon fresca, for 75 pesos (approximately $6 USD). Killian is a bright 22 year old business student from Germany who just spent the last three months in Guadalajara to study Spanish and who will soon leave Mexico to participate in an internship to develop opportunities for Germany to export products to Costa Rica.

Our meal was followed by a visit to the Museo de las Culturas de Oaxaca. Felix and I spent upwards of an hour in the room featuring the treasures of Tomb 7 of Monte Alban. The Zapotecs produced gorgeous, intricately carved bone pieces depicting various animals and gods as well as beautiful translucent vases of alabaster. One brilliant but macabre piece was a turquoise mosaic on a human skull. We solicited the help of Ricardo from Guanajuato to help us understand the signage in Spanish. We also visited one room with pieces from the Spanish Conquesttreasures resulted in much of the Mexico we see today, with the large elaborate churches with gold leaf detail and the Christmas performances in the Zocalo.

(Approximately, 11 pm)
Following the museum, Felix and I enjoyed a delightful meal at a restaurant called Zandunga Sabor Istmeño, with food in the style of the Istmeno region in Oaxaca. The restaurant was not written up in the Lonely Planet, but had such an inviting corner storefront with doors that open onto the Plazuela de Carmen Alto at the corner of Garcia Virgil and Carranza. The meal was wonderful and thus far, my favorite in Oaxaca. We began with thick, fried corn tortilla chips with a smooth, red salsa picante accompanied by a side of seasoned, minced dried fish. (Pardon the photo, the novelty of trying the new side with chips trumped the restraint of getting a photo of the food when it was first served.) The chips were followed by two side dishes, ganaches and un tamal de elote. The ganaches were small round, fried tortillas filled to the edges with a serving of lightly seasoned pulled beef. This was accompanied by a serving of cortido, shredded cabbage seasoned in salt and oregano. The tamal de elote was a very simple, sweet, smooth corn tamal with no filling. Our main course was polle en mole rojo, our second mole of the trip. If my listening skills in Spanish serve me well (definitely doubtful at times), I understood from a vendor in the mercado that people buy mole paste, which they reconstitute in chicken broth. The red mole at Zandunga was divine to my taste buds. I had to close my eyes to savor the taste, which we of course greedily finished with tortillas once the chicken and rice were gone. The meal was a wonderful finish to a very satisfying vacation day.