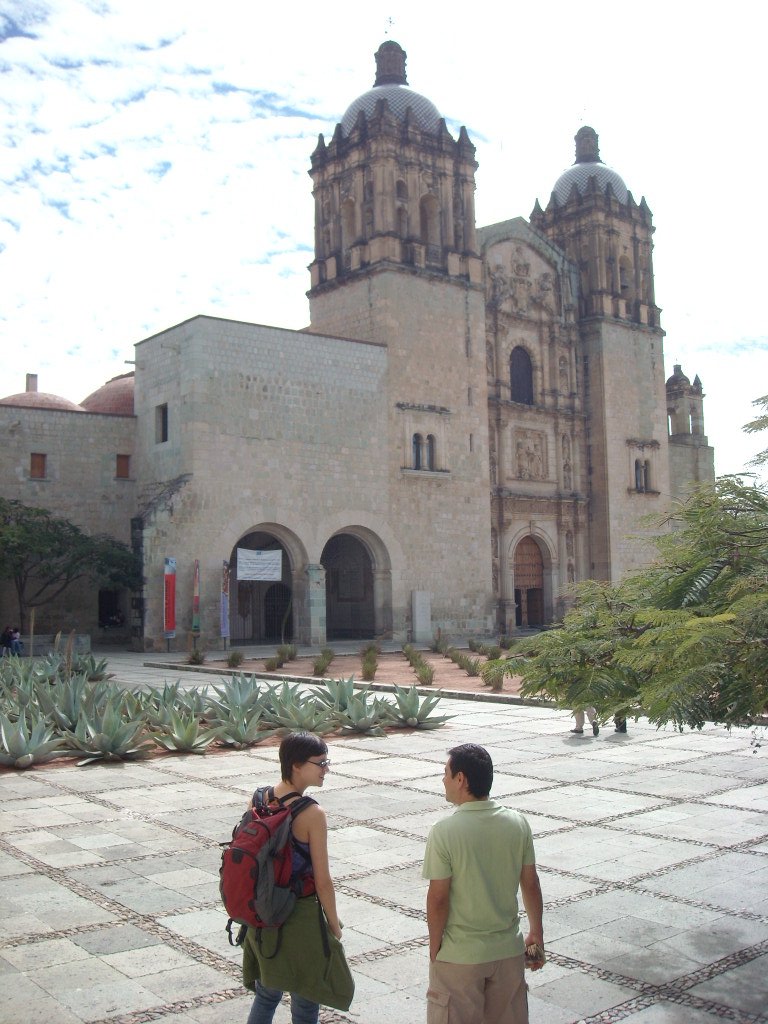 I’ve never known Sarah to be bashful, but she hesitated and ultimately refused after I asked her to take a photo of a camioneta for me.

Then again, there were two police officers standing in the bed of the pick-up truck which had just pulled over a four-door Renault Megane. One of Oaxaca’s finest was in the “ready, aim, fire” position while pointing a rifle at the sedan, “just in case.”

Fortunately, aside from this weak-in-the-knees moment, Sarah was anything but timid the rest of the day. Virtually anywhere we went, she would strike up on a conversation in near-fluent Spanish with anything that looked warm-blooded and had a mouth that could open and close. This was great because 1) it gave us plenty of opportunities to talk with native speakers in español, 2) we learned a lot about local culture, and 3) we got some free ice cream out of it.

It also underscored how amiable people are in Oaxaca de Juárez. Literally everyone we talked to today was friendly and eager to talk with us. Many were interested in where we came from and anxious to rave about the local beauty that is their city.

From talking with these people, we learned what one of Oaxaca’s icons (stairs, or escaleras) signified (“moviento de la vida“). We also went into a square where there were long queues of people waiting to pay their telephone bills, and a woman explained that there was no such thing as online bill pay or even pay-by-mail.

The Telmex offices weren’t completely in the Flintstonian age, however. There were long lines of presumably computer-literate people waiting to feed some bills to an ATM-like machine.

Speaking of ATMs, so far we haven’t had any problems withdrawing funds from them. Then again, I rarely have had these sort of problems in other countries as well. More difficult is dividing Mexican pesos by 12.5 to figure out how things cost in U.S. dollars. The way I’ve been doing this is dividing by 10 and then knocking off another one-eight from the result.

Or just not bothering to do any math. Most local things in Oaxaca—including meals and services—are much less expensive than in the U.S. For example, today for lunch I had four memelitas (corn tortillas with refried beans and cheese, much like tacos) for just 20 pesos, or US$1.54!

A cup of nieve tradicional (traditional ice cream) that was muy rica cost 10 Mexican pesos (US$0.77). However, Sarah and I ended up being treated to this, because two Mexican tourists named Manuel and Jorge that we talked with at length insisted on buying us some and no amount of argument was going to change that.

So belying the number of armed- and whistle-blowing police here, Oaxaca has seemed very friendly and peaceful, at least on the first full day of our trip. This has been especially true during the mid-afternoon when even construction workers were taking siestas on steps.

But I think we are going to try hard to have no guns pointed at us, even if that means missing more otherwise-perfect photo ops.