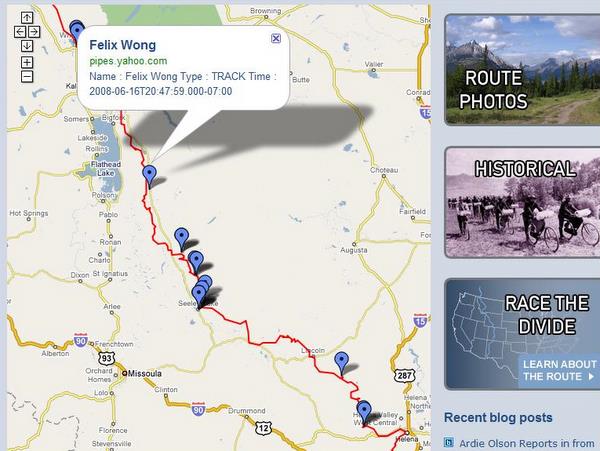 One year and seven months after the event, I’ve finished transcribing notes from the ’08 Tour Divide, the epic self-supported MTB race from Canada to Mexico I finished sixth place in. This includes notes I scribbled daily inside a notebook inside my ultra-light one-person tent under the glow of a blue pen-light, usually at night after at least 15 hours of riding. They also include cleaned-up versions of the transcripts that Sherry (wife of one of the racers) took from my race call-ins.

Links to these transcripts appear at the right in the format “Tour Divide: Day XX” corresponding to the day of the race. Since it took me 27.5 days, there are 28 posts. Probably the most pathetic call-in was this one (Day 27 from Mimbres, below). Um, enjoy.

Hi, this is Felix Wong calling from Mimbres, NM at 11:25. I’m here a lot later than planned or expected, but quite frankly I’m happy to be here at all. There have been many times during this race when I thought that there is no way this race could have gotten any more difficult, any more traumatizing, but let me tell you the last 24 hours starting roughly half an hour after my last message have been incredibly difficult.

Speaking of spare tubes, shortly after it started raining, I did get another flat. Since I was out of CO2 cartridges…..

Anyhow, I’m in Mimbres stopped by the first store I seen in 200 miles, eating food right now. I’ve listened to all of your messages. A dear friend has been reading them to me, leaving them on my voice mail and I really wanted to thank you all for your message and support…

Its 11:40 Monday (he means Tuesday) morning. I’m hanging out here and eating as much as I can. Like I mentioned in my last message. I was bonking really badly. I was down to my last bag of peanuts which doesn’t have that much carbs. I went through all of them. I can’t image that eating 2 lbs of peanuts in one day is good for the body but you have to use what you have and that is what I have.

I hope to carry on to Silver City within the next half hour. I might have to stay there tonight. I was hoping to be a lot farther than that. Given my condition, it might be wise for me to stay there overnight and make the final push tomorrow. I’m hopefully going to make it Silver City tonight. Pick up my tubes I purchased from Gila Hike and Bike, fix my flat, see how I feel. I may carry on. Right now it looks like there is no way I’m going to get to Hatchita tonight. I [might not] even be in Silver City tonight. [If not] hopefully I’ll get there tomorrow. Bye.

Hi Felix, how did you prepare for this event physically? were you doing 100mile rides weekly before? thx for taking us through your journey from the comfort of our couch :-) ↩ Reply