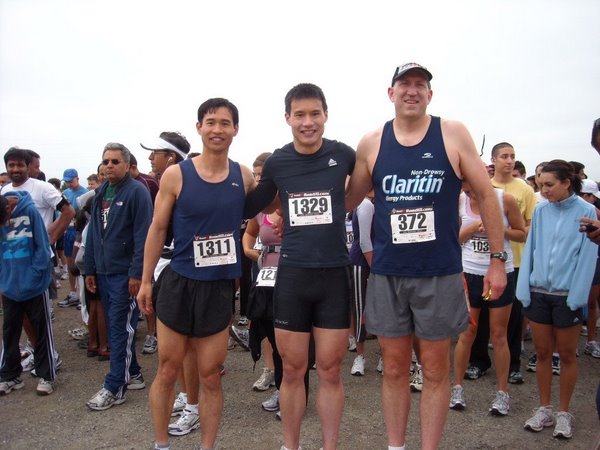 Count this as a race I’d like to forget or even be disqualified from. I had taken over the #2 position at Mile 2.7 and had second place virtually locked up with a half-mile remaining—but then I got hopelessly lost. Crying out “WHICH WAY?” in vain to the atmosphere, I turned around to see runners behind looking equally discombobulated. “Inexcusable,” exclaimed the #3 guy, referring to the non-existent course markings at the end. Ultimately, after darting down an embankment and climbing over a chain-linked fence, I found my way to the finish line, but only after I had lost eight minutes. Instead of finishing second in a PR 39:xx, I finished in 47:xx after an angry sprint to the banner.

Oh well, it was a charity event to abet illiteracy in India. And I got to see a bunch of ol’ pals. Four of them, in fact.

My friends Alyssa, Everitt, Stacey and Russ all came out. Alyssa and Russ ran the 5k, Everitt and I did the 10k, and Stacey cheered and snapped photos. Everitt—whom I know from my days with the Tri-City Triathlon Club—normally can kick out a 10k in 40 minutes, but had a blood clot in his lungs he is still recovering from. He still finished in 45 minutes. Russ (also from TC^2) used the 5k as a last tune-up before next week’s 50k Ohlone trail run. Alyssa surprised herself with a solid run on virtually no training. Her time was only 1.5 minutes slower than her personal record and, best of all, she totally outkicked a 12-year-old at the end.

“I couldn’t let that little kid beat me,” she later reported. “I had to put the hammer down and outrun him once I saw the finish line. I have no shame.”

The food given to participants at the end was authentic Indian—by far the best post-race food I’ve ever had at any race, period. From there we went to the Palo Alto Farmer’s Market and ate rambutans and drank sweet mango lassis. Yum.

It turned out to be a very pleasant day to run, munch on exotic food, and hang out with good friends. Now if I can only stay on course better in the future…