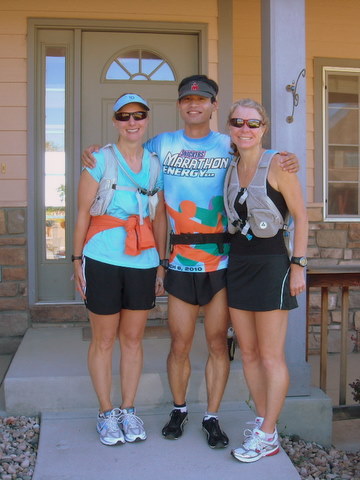 Today was her birthday in which she decided to celebrate by running her age. Naturally I thought that was a great idea—having run my age in kilometers just a few weeks ago—but instead of running it metrically she insisted on the whole she-bang in miles. Less wimpy, you see.

I was a little puzzled, then, about why we were going to run 46 miles today instead of 29. It seemed like 17 extra-credit miles were a bit excessive.

We settled on a scenic, out-and-back route from Cat’s home to mine. We started out trotting over hills adjacent to the Horsetooth Reservoir that are familiar to anyone who’s run Horsetooth Half Marathon, to Bingham Hill, past the McMansions of Eagle Lake, and then finally to the hard-packed dirt country roads that eventually lead to the Hearthfire Trail in my neighborhood. Repeat in reverse.

We had good company along the way. Running the entire distance with us was Steph, an ultra-runner Cat met a few weeks ago at a Leadville training camp. Earlier in the week, Cat’s husband Dave asked her what she knew about Steph since Cat’s new friend was going to even stay at their home the night before the birthday run.

“Well, she’s an ultra-runner,” replied Cat. “And she’s an FBI agent. That’s about all I know…”

Happily, Steph was super cool. Despite being an intelligent intelligence agent and ultra-distance runner who had completed more 100-mile runs than Cat and I combined, she professed having a “Type B” personality. She seemed really amiable too and put up with my questions about whether she had an undercover name, alter-ego, etc.

“You’re like a real-life femme fatale,” I accused her. Cat would later tell me this nice young lady even had a military background. A bad-ass, I’ll tell you.

In addition to Steph, we had more company at various parts of the run including Kerry (about 8 miles), Pablo (who met us at my house and ran the second half of the run with us), and Pete (about 4 miles). Not a bad turnout for a workday.

We got to Cat’s place earlier than expected, meaning that we were running a pretty good pace. Indeed, we probably only stopped for a total of about 15-20 minutes, including twice at an outhouse off Centennial Rd., twice at a convenience store in LaPorte, and about 10 minutes at my place.

However, when we returned to Cat’s place, Steph’s GPS read “only” 45.5 miles, so Cat INSISTED that we run around her neighborhood to make it 46. But while Pablo and I resigned ourselves to doing this extra loop, Steph would have none of that and instead promptly hopped into her car and sped away. I suppose that’s exactly what Grace Jones or Pussy Galore would have done in the James Bond movies, too.

Later that night, Cat had a birthday party at her place. She then revealed that she really wasn’t 29 but that we were celebrating the 17th anniversary of her 29th birthday. So I suppose the 46.0 miles we ran made some sense after all.