“Grand Mesa is the largest flat-top mountain in the world,” said Phil, the organizer of the inaugural Grand Mesa 100-mile run at the pre-race meeting, “but you will find it is not flat.”

Phil then presented more information calmly and matter-of-factly as if it were the seven o’clock news. We probably should have interpreted the details, however, more like a warning that the Titanic was about to sink.

“The Forest Service had been removing course markings because they did not know about the race,” he remarked. “Some of the trails are non-existent too.

“But if you get lost, you know what to do. STAY PUT and we will find you.”

I don’t think many of us took his advice of remaining in place due to directional discombulation very seriously. But I also don’t think any of us foresaw that staying on course would be so much of a problem.

The first time I got lost was around Mile 8 when a heard a primal scream behind me that stopped me dead in my tracks. “Runner, STOP!!!” Apparently I (and 13 others) were off course even though we were following the pink pieces of ribbon tied to tree branches that served as course markings. I’m still not exactly sure how a couple astute runners knew we were astray and how they knew how to get back on route, but in any case we ended up running an extra mile within the first 10 miles.

A few hours later, I became navigationally challenged again after crossing a barb-wired fence. I was saved, however, when I spotted Karla and Caroline running together a quarter-mile in the distance. I cut across a field and caught up to Karla saying, “man, am I glad to see you—I was completely lost!” Seeing her also boosted my morale as I had been running the last hour entirely solo, had tripped on rocks about 30 times prior to that (fortunately, only one of my stumbles resulted in a bloody fall), and was much more tired at Mile 30 than I imagined I would be especially when considering I was moving at a mere 13-minute per mile pace.

Karla and I ran to the next aid station together, but not wanting to linger there I took off shortly after Caroline. Before I left, an aid station volunteer gave me some beta on where to go: “Cross the dam, and then turn LEFT.” He repeated these directions twice.

But as I started across the dam, Caroline (in the distance) shouted, “Which way do we go?” I replied, confidently, to turn left as the volunteer’s directions were as clear as a clean window. So we went left, only to not see any markers. But there were so many other places on the route that didn’t have markers that should have that we held out hope and kept going onto a rather steep hill. After wasting about 20 minutes wandering around and unsuccessfully looking for clues, we ran back towards the dam and encountered another runner who insisted on turning right.

It turns out that heading right at the dam was correct, and the aid station volunteer had not gotten a last-minute memo that the course had changed the night before. Consequently, he was giving wrong directions to all the runners.

Caroline and I ran to the Mile 42 aid station together, where we encountered Cat (who was going to start pacing Karla there), Karla’s husband Paul (who was offering moral and logistical support), and Caroline’s pacer Ning. Cat half-jokingly told me, “If you can just stay in the race, you might be able to win because everyone is dropping like flies due to getting lost.” But unfortunately, this is when things really started to go downhill for me.

First, the course was literally downhill including a 1,000-foot drop over a mile. I was struggling enough with my footing on the rocky, six-inches-wide trail that I could only walk and consequently was unable to keep up with Caroline and Ning. Thereafter, I also stopped and turned around a couple times (sometimes while shouting out, “Anyone there?”) because I wasn’t seeing any markers and was concerned I was off course once more.

An hour later I crossed a shin-deep stream while wondering why pink markers were heading in a direction non-perpendicularly to the water, and then was faced with an uphill climb. This was a major surprise to me because the elevation chart showed this entire stretch as steeply downhill, and yet I kept having to go up. I had déjá vu from the morning, when I was following pink markers but was nevertheless off-course. Here I swore I was off-course for the fourth time all day because the terrain did not match the elevation chart at all.

After 15 minutes of going uphill I was faced with the decision of either backtracking or continuing forward, and ultimately I chose the latter option because at least I was still seeing pink markers. I was resigned to being on some other (wrong) part of the race course, but figured (hoped) the pink markers would at least lead to an aid station. It was about this time I had decided that once I arrived to safety, my race was done.

A couple hours later, I made it to the Kannah Creek aid station. I was on course after all. But yet, there were just too many reasons to stop. As I later explained in an e-mail to Cat, it basically came down to safety and time. I thought that going out on a badly marked course during the night while utterly exhausted was akin to trying to sail through the Indian Ocean in the middle of winter, or climb Mt. Hood when the weathermen were forecasting a blizzard. I’d be rolling the dice on needing a Search & Rescue effort or—worse—my life.

There was definitely a part of me that wanted to go on, but I had a certain amount of conviction in my decision when considering the odds of something awry happening. Considering I got lost 4X in 50 miles in broad daylight, I thought there was over a 95% chance I’d get lost at some point in darkness. As I was not equipped with any survival gear or even enough water to go 1-2 extra miles at the pace I was going, I thought that risk was too great.

I was also concerned about the terrain—in broad daylight I tripped more than 30X during the day and was lucky to fall/get bloodied only once—and I thought I was at high risk for falling and breaking something when it was dark and I was tired. My technical running skill is something I know I need to work on, but at least I was aware of my limitations.

Finally, I think realistically I would not have made the final time cut-off even if I somehow didn’t get lost or injured in the last 50 miles. I was just moving too slowly. In most cases I would have persevered regardless until the organizers forced me to stop, but there were the safety issues above that made carrying on seem particularly futile.

I’ve never regretted backing down from a challenge due to safety’s sake, which gives me hope that I at least sort of have my priorities straight.

My race was done, but this is not the end of the story. The other runners had tales of woe as well.

Karla came into Kannah Creek about 20 minutes after I did with some alarming news: she had not been able to pee for a good part of the day despite drinking at least 40 ounces between aid stations. So at the Mile 50 aid station she kept drinking water, hoping that her bladder would produce more than a trickle of urine. No dice. Hence, she wisely called it quits not wanting to risk kidney damage. It was frustrating for her because otherwise her legs were feeling good, and she was probably the only runner in the race who did not get lost and was merely directionally confused at times.

Alex—in addition to getting lost with me for a mile early in the morning—apparently got lost in the same area I did before I encountered Karla and Caroline across the field. But he got much further off-course—a total of 10 (?) off-route miles during the day. I think he threw in the towel at Mile 58.

Caroline went farther than Mile 58 but got sick and had to bail. The day after, she still had an awful headache and her stomach felt ill.

After Karla dropped, Cat paced a guy named Bob and they gallantly trotted into the night up a 4,000-foot climb to the next aid station. I haven’t heard the complete story yet, but here’s her preliminary report:

I had a good climb with Bob, felt really strong, but I think it really took it’s toll on Bob because he really crashed later. We dropped at 65 after a lot of internal argument on his part. We were only at Mile 65 at 3am, and no way to make the cutoffs given the crappy course markings. I’m glad we tried, though… it was a good experience for me, and taught me a little about night running and fatigue (I wanted to lay down in the middle of the road and go to sleep several times starting about 2am!)

I would be curious to see final results…..bet the finish rate is abysmal.

As it turned out, only five out of 30 starters finished the race (PDF, 6 KB). It sounds like the majority of the drops were related at least in part to the poor course markings, the last minute route changes, and needless extra miles.

That said, the race has great potential. The Grand Mesa is Miss America gorgeous (at least when I wasn’t fixated on rocks two feet in front of me or course markings the vast majority of the time), the race volunteers were super friendly and generous, and Phil the Race Director seemed like a good-hearted man and fellow ultra-runner who surely will have learned from the organizational mistakes made this year and put on a better race next time.

But as it was, the inaugural event was summed up best by the last thing Karla said to me:

“That race was a real clusterf*ck.”

Marco Peinado, pacer for second place finisher Marty Wacker, posted an excellent detailed report. It sounds like both Marty and winner Ryan Burch got really lost too in the section Caroline and I did between Flowing Park and Carson Lake. I wonder if it’s because they had listened to the volunteer’s incorrect directions too.

Also, Marco and Marty were attacked by pit bulls and encountered a bear. Marco also wrote that cows were eating some of the markers and that he got at least 30 mosquito bites on his legs.

Congrats to them for finishing and surviving a harrowing adventure!

14 hours for ~53 miles (including miles where I was lost).
Open spreadsheet for time splits. 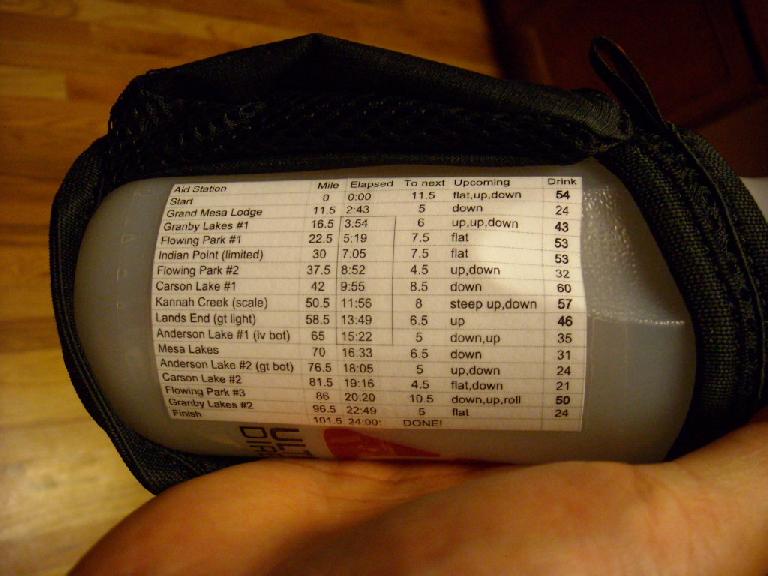 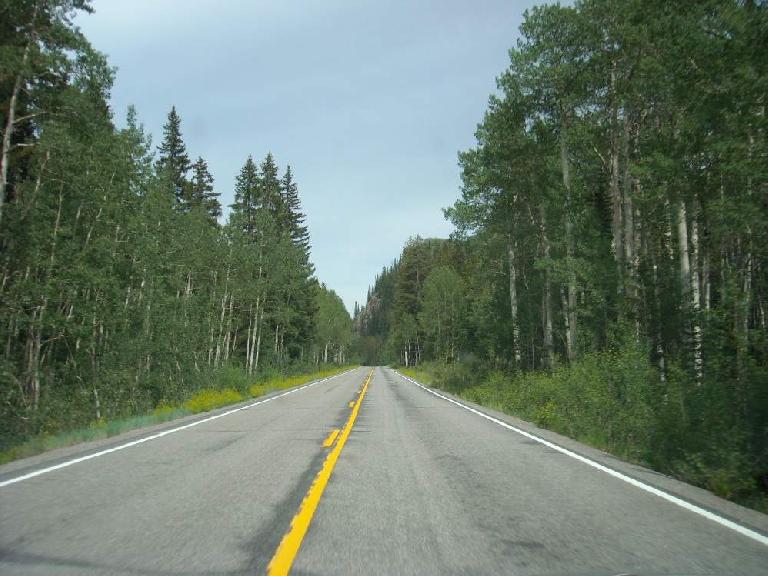 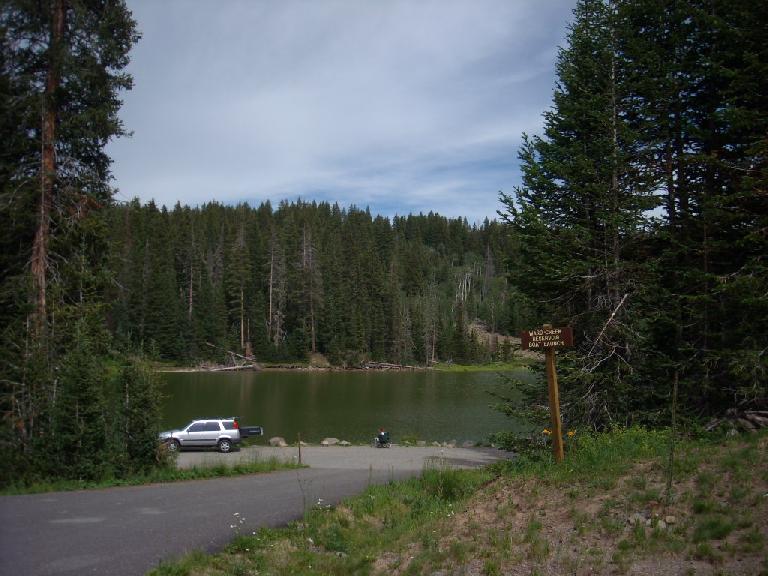 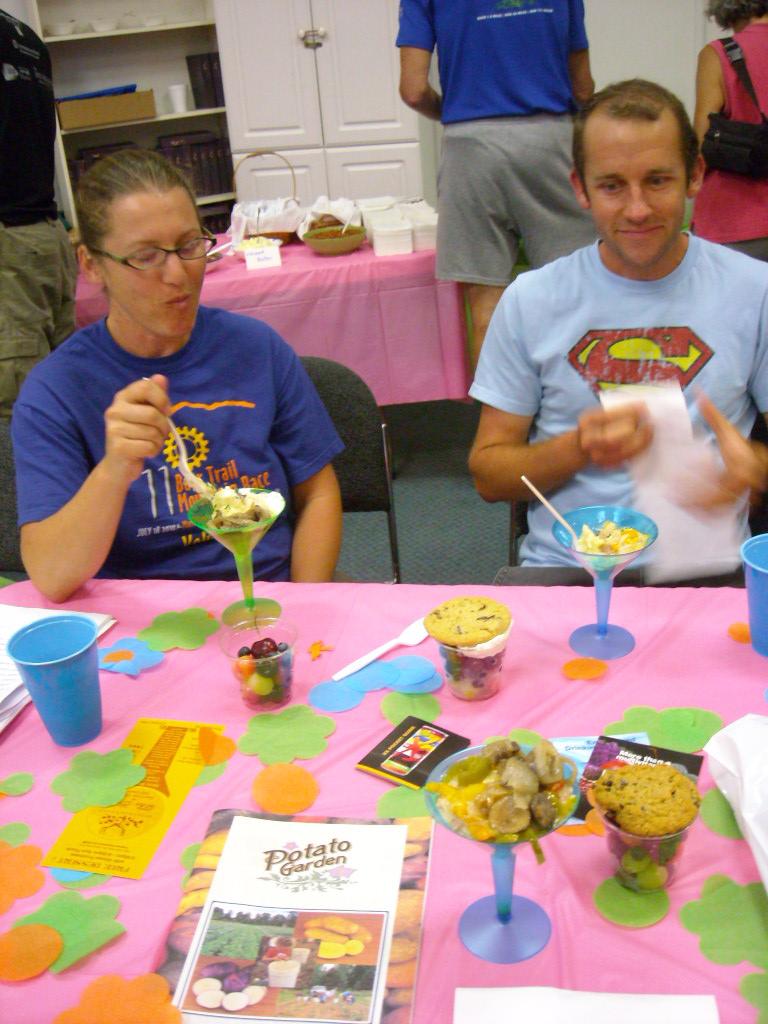 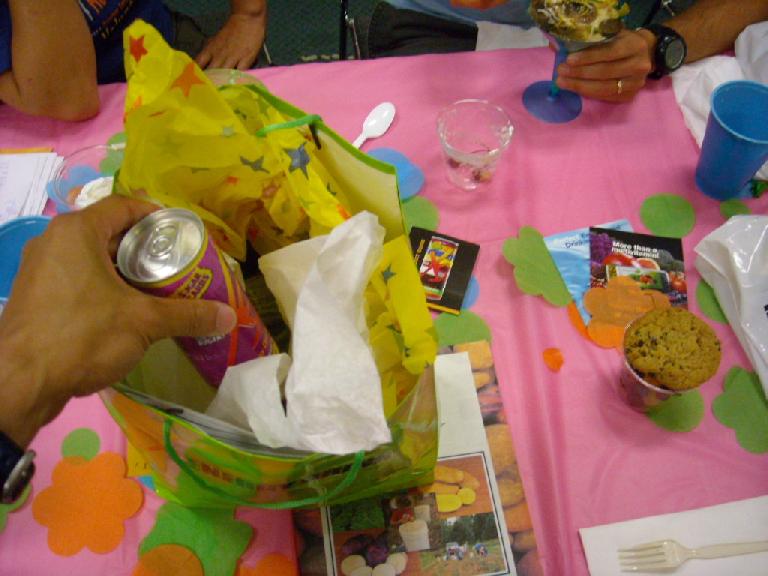 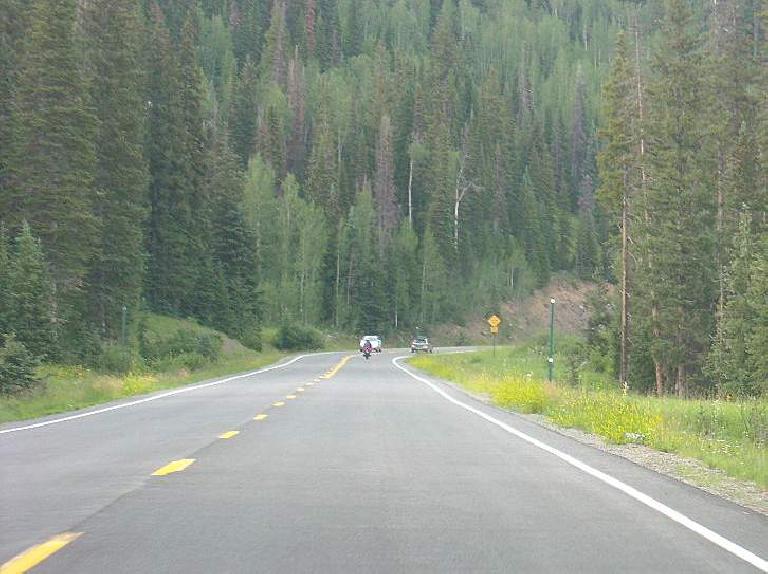 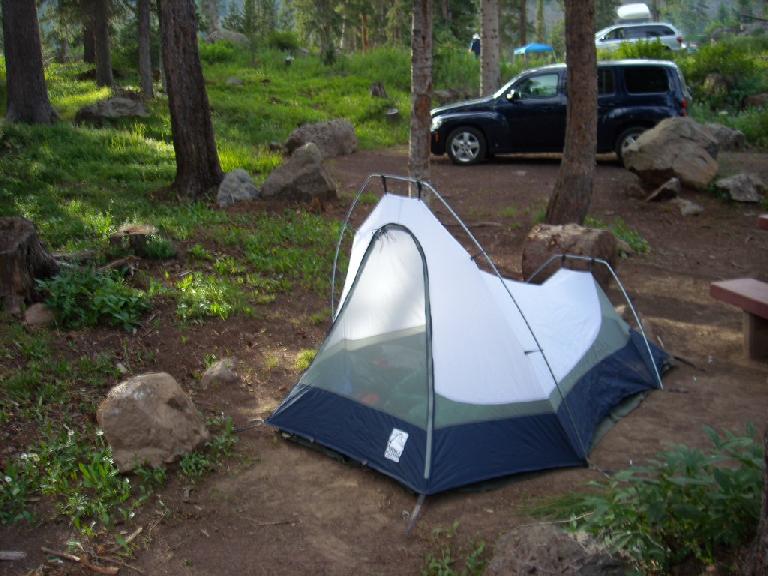 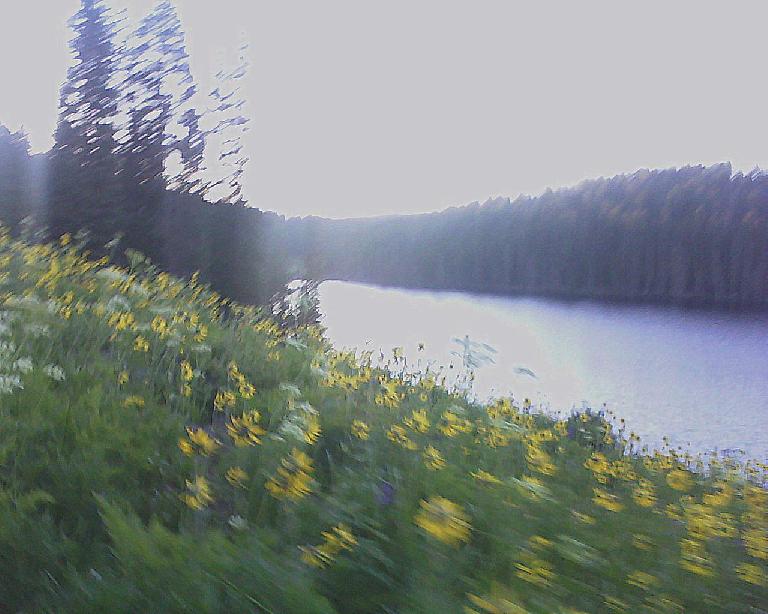 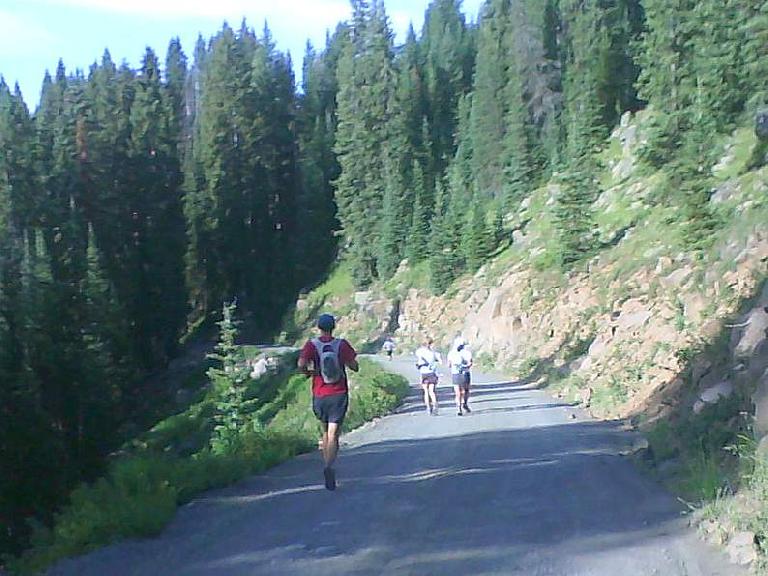 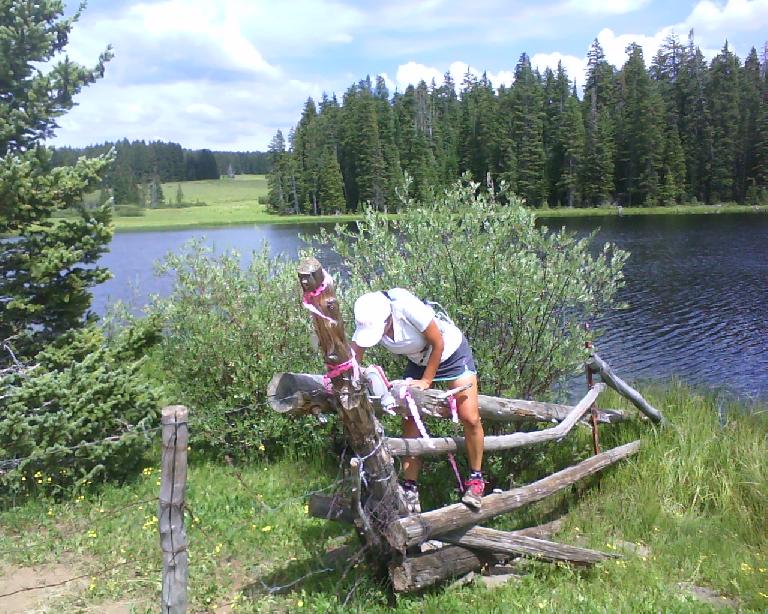 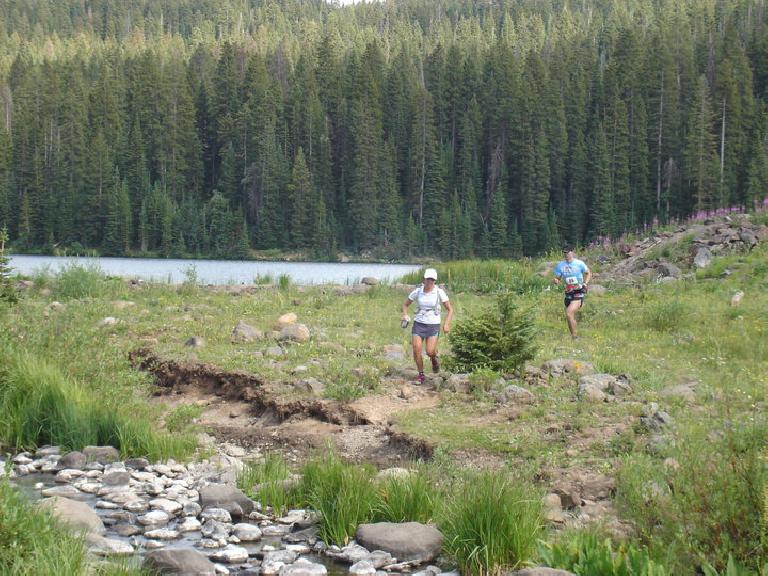 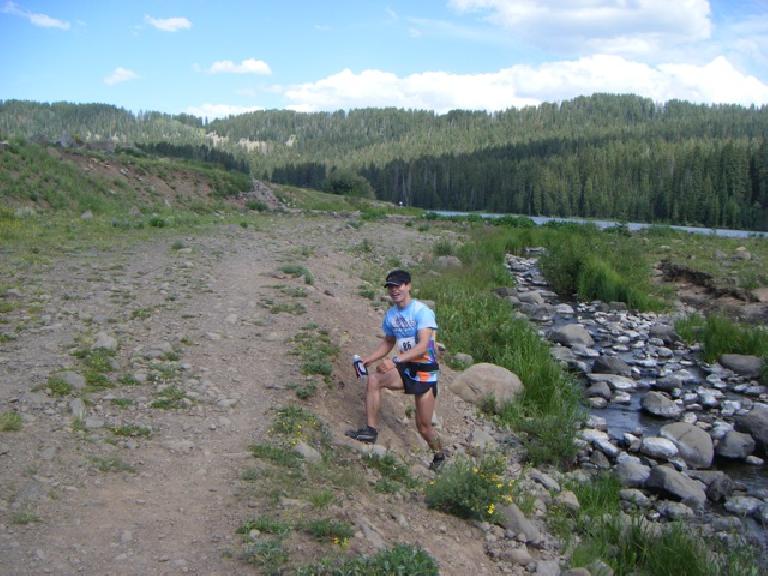 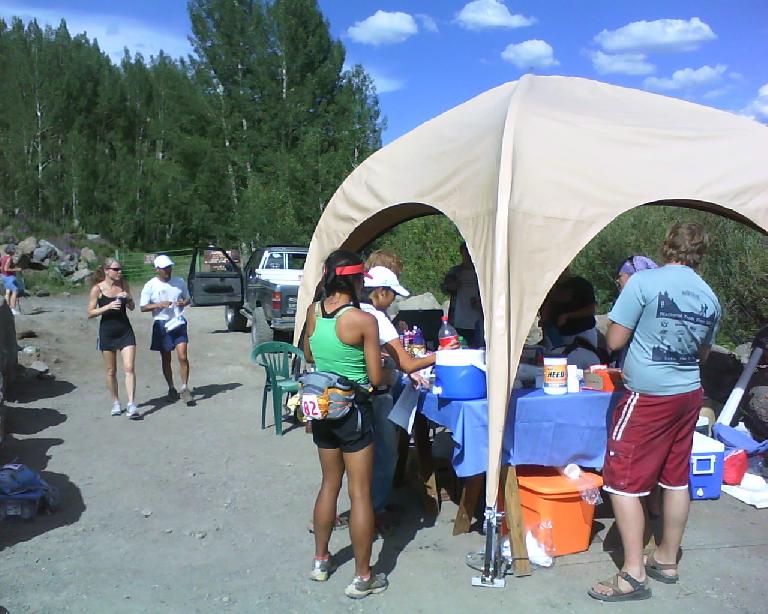