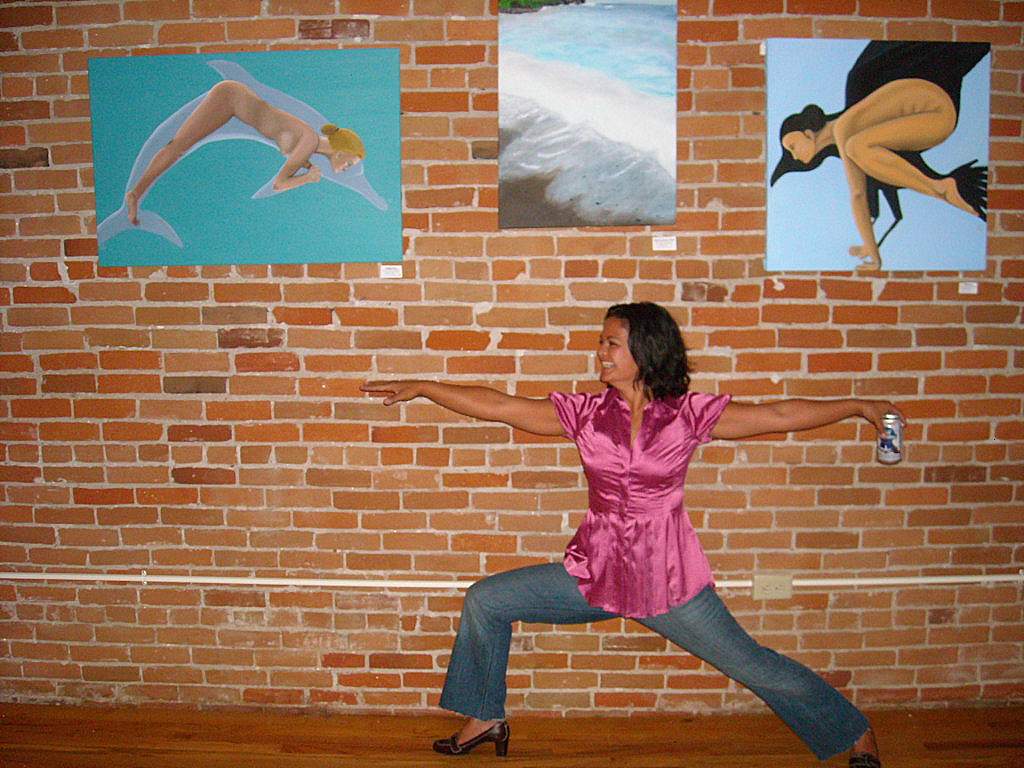 We were walking towards Gallery Underground to kick off First Friday Art Walk when we noticed something was a little different about Old Town Square tonight. Instead of its usual mix of musicians performing live or kids hopping on bear statues with a Ben & Jerry’s ice cream cone, there were a couple people bent over tying their shoes. No, wait, they were doing down dog. You know, one of the basic yoga poses. On yoga mats. In the middle of the square.

“Hey, take a picture,” I exhorted to Leah while handing her my cell cam. I jumped in while doing a similar pose. Not sure if my five seconds of yoga did me much good health-wise. But it did get me in an even cheerier mood for viewing art.

First Friday Art Walk is a monthly event in Fort Collins featuring nearly two dozen art galleries in Old Town. In light of its title, I don’t need to tell you which day of the month it is held. In my nearly five years of living here, this was only my third time doing the walk—a shame considering my appreciation for all things painted, drawn or sculpted.

But today we had a particularly good reason for doing it, as my buddy/neighbor Tim had just returned from a year-long teaching stint in South Korea, and his fiance Maria had also just flown over from Seoul to visit him and her would-be in-laws. We figured the art walk would be a perfect way to show her not only the talent of Northern Coloradoans, but provide her with a taste of Tim’s hometown and the inspiration for Disneyland’s Main Street. I also figured it would make a nice double date.

What we didn’t exactly count on were all the other distractions occurring in Old Town. In addition to the aforementioned Yoga Fest, there were singers strumming guitars on sidewalks and horses giving carriage rides on the streets. We also visited my yoga instructor Sammie in Old Town Yoga which was doing an art showing of its own. Leah and I also kept running into people we knew, and even Tim (who was absent for a whole year) spotted a young lady who used to attend our Spanish Conversation group.

A couple hours later, we stopped by my favorite coffee shop—the Bean Cycle—which has bicycles hanging off the walls along with art that is rotated weekly. On this particular night was the monthly (and also First Friday) poetry jam, which we stayed for while sipping smoothies and munching on croissants until the final round.

All said, we visited only two art galleries—three if you count Old Town Yoga. But we had a blast, and the evening was indeed a great introduction of the Fort to Maria.

She got to experience a few things that make Fort Collins Money Magazine’s Best Place to Live in the U.S.: its people, weather, lively downtown, and a plethora of things to do. Including art, poetry, and of course, yoga.