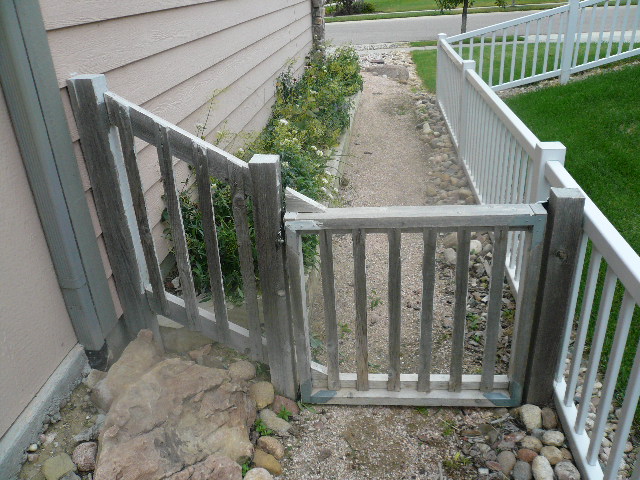 It’s been a little while since I’ve done any sort of home maintenance beyond house cleaning, but I suppose that doesn’t excuse me from having terminal amnesia in regards to two lessons I have long learned. 1) Home projects always take longer than I expect them to. An old rule of thumb I had was to estimate the amount of hours I think I could do the task in, and then multiply by pi. 2) A lot of times it is better—and more economical—to outsource the task.

Case in point: the fence shown at the top of this web page. Painting it has long been on my to-do list as its flaking paint was, frankly, an eyesore in my neighborhood of custom homes, manicured lawns and colorful gardens. It became even more of an aesthetic monstrosity after my favorite neighbors next door repainted their fence and trim.

So when the said neighbors gave me some leftover white paint that was even self-priming, I resolved to tackle the task before temperatures on the outside thermometer dipped too low to do the job effectively. Never mind that I have about a hundred other things I’d rather or should be doing. I figured the fence was small and it should only take one or two hours, something I could easily get out of the way on a Saturday morning.

Oh how naive that was. In fact, it took me six or seven. Yes, 6-7! Did I mention six or seven? STUPID FENCE!

And in reality, since I started just before noon, it wiped out my entire day as by the time I finished, the sun had already dipped below the Horsetooth mountains. I couldn’t help but feel that, at the end of the day, this was 6-7 hours (did I mention six or seven?) I had just squandered and would not be getting back any time soon.

But how in the world could it possibly take so long? I mean, look how small the fence is! Well, as badly as the paint was flaking, it was not flaking readily enough while I was trying to remove it with a scraper and sandpaper. After a couple hours of manual labor and I seemingly only removed half of the remaining paint, I decided that I was going to have to figure out a more efficient way. So I changed into my motorcycle gear, hopped on the Buell and motored over to the nearest Harbor Freight, where I purchased a Chinese orbital sander.

I returned home and—by golly—this cheap-o $9.99 device sure made the job easier. However, it still meant that it another hour had passed for me to go out and obtain this thing, and as amazing as the tool was, it still wasn’t like it had robot arms and legs to move itself along the fence for me.

By 4:30 p.m. my prep work was done and now it was time to just slather on the paint. Again, this took much longer than expected. Somehow when I think of these tasks I’m thinking more in terms of Photoshop: just click a few buttons here and there, and, voila, all done. When it was all said and done it was well past 6:00 p.m., and I still had paint cleanup to do.

In the final analysis, it would have been much more economical to outsource the job. Instead of slaving away for 6-7 hours, I could have done 1-2 hours of the engineering work that I was struggling to keep up with as it was, and spent the remainder of the time going running, biking, hanging out with Leah, or even blogging—all while paying some poor kid (or even a pro!) who really needed the work and dollars. I would have gotten more caught up with the work I’m better at, had a few more hours to exercise or socialize or decompress, helped stimulate the economy (if only to the smallest degree) and still come out ahead financially (by virtue of engineering work paying a lot more per hour than fence painting). We all would have been happy.

But no, I had to do it myself. I have to get out of that habit. Sometimes it just doesn’t make sense.

That said, the fence does look quite a bit better now. See the photos below.

But next time, I will be outsourcing. Or at least multiplying my time estimates by pi and being mentally prepared for the time-suck.