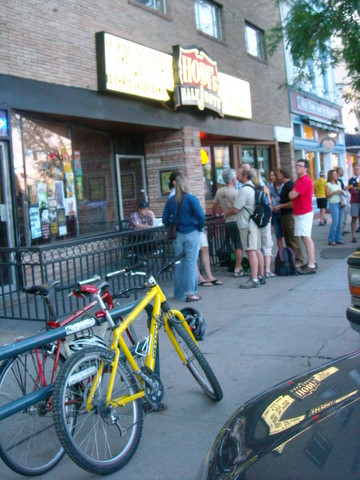 Two years after completing the epic 2,700-mile Tour Divide, my faithful yellow Cannondale F700 remains in a state of disrepair. I still haven’t completed patching over the hole in her frame where a rack eyelet once was, and the crankset wobbles and her bearings are about as smooth as Scotchbrite. The short video clip below demonstrates how shot her bottom bracket is:

Yet, today I dusted off her cobwebs and reattached her chain so that we could return to the Divide together. Well, not the actual Continental Divide, but instead the Ride the Divide movie. The movie finally made it to Fort Collins!

This is the third time I have viewed the film and it seems to only get better each time I see it. In my first review of the film I noted the gorgeous cinematography, and I never get tired of seeing footage of the snow-capped peaks that the Great Divide Mountain Bike Route wends around.

But one thing I failed to mention but is totally noteworthy is the movie’s soundtrack. The music throughout the entire film is hauntingly beautiful. Kudos to producers Mike Dion, Anthony Camino and Hunter Weeks for selecting audio that is absolutely perfect for this award-winning film.

After the movie, promoter Garry Harrington had me do a Question & Answer session with the audience. I was happy to oblige. The film brought back a rush of emotions and memories that I was glad to share with all.

Meanwhile, Cranky sat patiently outside. It wasn’t until 10:30 p.m. that we were back rolling on the road, under the stars with little noise except the crickets chirping and the whirl of the Cannondale’s chain. It felt a bit like riding at the end of each day during the Tour Divide itself.

Cranky will never really return to the Tour Divide race again, but it’s nice to have the Ride the Divide movie keep the memories alive from the greatest adventure of her and my lifetime.