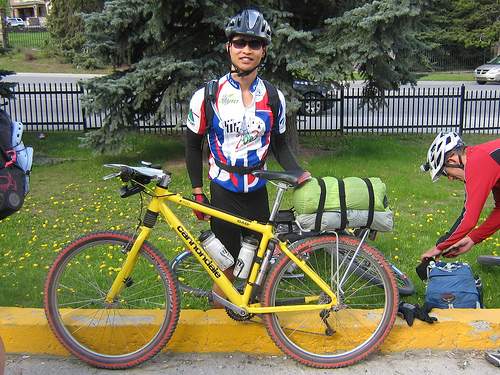 It’s been 12 years since my #1 lifetime adventure—the 2008 Tour Divide—and 10 years since the iconic movie, Ride the Divide, came out and beautifully documented that race.

It was the first-ever mountain bike race from Banff in Alberta, Canada, to the Mexico border at Antelope Wells, New Mexico, spanning the world’s longest mountain bike route along the Continental Divide. The rules were pretty simple: no crews or outside support was permitted, and you had to follow the official Adventure Cycling Association’s Great Divide MTB Route using their maps. Do anything but 100% of the course or get caught having outside support (such as, calling a friend to bring you a new wheel… this actually happened with one racer), and you get disqualified.

At the time, the event was considered the most difficult event in the world. In the months before 16 of us set off from the Banff YMCA, mountain bike enthusiasts wondered how many would finish. They speculated about all the obstacles: snow in the north, long stretches (e.g., 100-200 miles) between re-supply points, mosquitoes, technical singletrack, tire-sucking mud, etc. It turned out the race would have all of this and much more, to the point where I (and I am sure, most of the others) was having some sort of crisis at least every three days. Heck, I even completely ran out of food out there due to an unfortunate set of circumstances, such as all services in Pie Town, NM were closed on the Fourth of July.

This race was also 2700 miles with 200,000 feet of climbing. That’s all one stage. I.e., the race clock keeps on ticking even while you sleep, which I often did in the middle of the woods or the side of the road in a one-person tent.

Crucially, this was still before technology had totally removed a lot of the risk—and dare I say, adventure—of long-distance travel through the middle of nowhere. The first iPhone was only introduced the year before. Most of us were using flip phones and, in fact, for the call-ins, we had to use pay phones because cell phone service was mostly non-existent along the Continental Divide.

GPS was still in its infancy and you’d be lucky to get a couple hours worth of use from a large GPS device back then. So we all had to use maps, of which there were seven. I got lost several miles a day, trying to follow directions like “go 6.7 miles and turn right at an unmarked road.”

Anyhow, the inaugural Tour Divide was a pioneering event and the award-winning film, Ride the Divide, would inspire a whole new generation of bikepacking enthusiasts and transcontinental races worldwide (e.g., the Transcontinental Race and the Trans Am Bike Race) in the ensuing decade. So it is fitting that the producers of the film are holding a 10-year-anniversary celebration.

This celebration was held virtually online on Sunday, August 3rd, at 3:00 p.m. Eastern Time. The schedule was as follows:

Thanks to those who hung out with me and the other racers virtually at the event.

How the Event Went

RTD10 was a great success! I enjoyed reminiscing about the race with the producers and racers.

I took notes from some of the above speakers’ presentations. You can read them in this Word document.

Kudos for discovering it, setting and goal, and completing it, John! For me it ranks as my greatest life adventure and I'm sure it is up there for you too. Have lots of great memories for sure, even a decade later. ↩ Reply