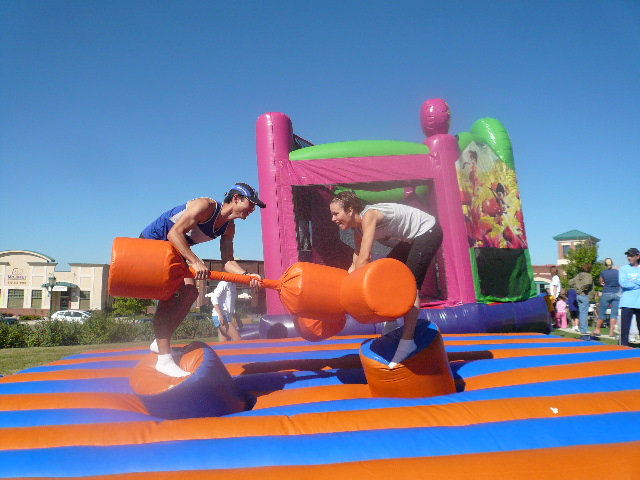 Since I’ve gotten lost in my last two races—including a heartbreaker where I would have finished second for sure—you could excuse me for taking virtually every precaution to prevent the same fate in the 1st Annual Second Wind Fund Run/Walk Weld 5k, also known as the Suicide Prevention Run. This included repeatedly checking the website that was supposed to have a course map and—since that was ultimately non-existent—asking the race directors 10 minutes before the race to describe the route. A faxed, blurry diagram was produced and now having a general idea of the course, Leah and I lined up at the start with 100 others to run our lungs out in Greeley.

The National Guard was even present to ward off cars as we crossed the streets, and young volunteers manned key intersections to help prevent an errant turn. So when the race started late-but-abruptly, I was off the front like a fox chasing a chicken. My legs were rested and my new Garmin Forerunner 305 was securely fastened. It didn’t even bother me that on this somewhat chilly morning (49 degrees), we had to run through oscillating sprinklers that were doing a remarkably efficient job watering the sidewalks.

But the first sign that something was amiss was when after just three minutes, I had already passed a water station with a sign proclaiming “Mile 1.” I did a double-take on the Garmin just to make sure that I really wasn’t breaking Hicham El Guerrouj’s world record in the mile run, and then glanced back to see where the other runners were. There was one college-aged dude behind who looked to be my only competition, but it seemed like I was opening a pretty big gap. I did wonder why we were all trotting counter-clockwise through the neighborhood instead of clockwise like the faxed map showed.

Getting back to the main road where the National Guard stood tall, I crossed the street and ran through the oscillating sprinklers again. Going into another neighborhood I settled into a good rhythm and even my breathing felt pretty unlabored even if rapid, and I didn’t need the sports watch to tell me that I was moving pretty well for myself (low six-minute miles). I still was a bit paranoid about getting lost, though, with no one ahead or even close behind for that matter.

So I yelled out, “Which way?” to the volunteers at a certain intersection. It wasn’t clear if I should go straight ahead or turn at this corner where there were orange cones, though I suspected the former. The volunteers, however, all pointed right, so I turned. My gut quickly told me this was wrong but I was not going to argue with the volunteers who, presumably, knew the city and course better than I did.

A few minutes later, however, with the road with the National Guard in sight, I had a sinking feeling in my stomach. I was positive I was not on the intended route so I yelled out “which way?” again and one of the Guardsman replied, “I don’t know—you shouldn’t have been coming this way!” By now I was extremely demoralized but the finish area was in plain view so I headed towards that direction.

A couple hundred feet from the finish line of the volunteers saw me coming and said, “Stop—I think you shouldn’t have been coming this way” but I just ignored her because it’s not like I was going to run back and redo the course again, especially since I knew that the way I went was actually longer than the way I should have.

In fact, when I crossed the finish line the Garmin read 3.2 miles (short because I accidentally hit the “stop” button instead of the “lap” button at one point) and a later check of gmap-pedometer.com confirmed that I actually ran 3.27. And despite running .17 extra miles I still finished minutes before everyone else, so I was given the win.

My time of 20:23 was pretty pedestrian for a 5k—especially for a winning time—but considering the extra distance, I was in fact running 6:14/mile pace, or one of my better efforts. If I had more competition, stayed on course and not gotten flustered at the end, I believe sub-19 minutes was feasible.

Leah finished in 10th place as the third woman—an impressive result for her first race in five years. We stuck around for the awards ceremony where I was given a $25 gift card for Big 5 Sporting Goods, and later messed around on inflatable kids toys including a gladiator set.

Course logistics aside, the organizers did a great job putting on a fun event for all and also raising awareness about teenage suicide in Weld County. Apparently, Weld has the second-highest suicide rate in Colorado. In light of that statistic, I was quick to temper my frustration that for the third race in a row, I was navigationally challenged.

Besides, my “getting lost” streak has to end sometime.