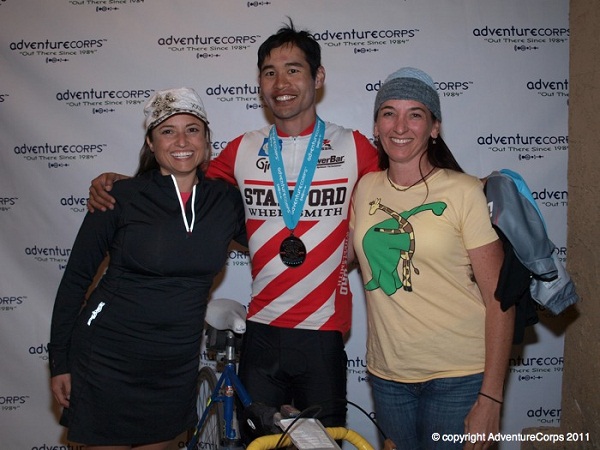 EPIC. It’s an overly used word in the ultra-endurance world, but that’s the first word that comes to my mind when thinking of the Furnace Creek 508. It included 10 mountain stages including many 10-25 mile climbs; 15% grades; 510 miles; and in my case, just 10 minutes of sleep and 39hr15min of biking. My stellar crew of two—Raquel and Tori—barely slept more than I.

Yet it turned out to be one of the greatest races I have ever done, one I got to do while taking in the stunning desert scenery on a magical 27-year-old French bicycle, with two of my closest friends following in a spunky eco-friendly Ford Focus behind. It culminated in an age group Classic Bike course record, and was an adventure for the ages filled with memories that will not fade any time soon.

I never got around to writing a full report, but you can read the Twitter feed below to get a sense of the race as posted in real-time by the Crew Goddesses.

Finished stage 4 at 8:00 a.m. Strong climbing on Salsbury. Smiling again after some snacks and caffeine. Working on stage 5 now. – October 9 at 9:21 a.m. PST

@torifoco and @raquelnotrachel are the best support crew ever – October 9 at 4:51 p.m. PST

In January 2022, I scanned the official 2011 Furnace Creek 508 race magazine into PDF format. It talks about the history of the 508 and includes information on the original four “fathers” of trans-American bicycle racing: Lon Handeman, John Howard, John Marino, and Michael Shermer.

It also lists all participants of the 2011 Furnace Creek 508. Every cyclist gained entry by invitation only after submitting their race qualifications.

Congratulation, we saw you came in. Our team the Ukalerk got there just about an hour before you. It is amazing to see you came in the the old double cassette and the classic shifters. I would love to be able to do solo for the 508 one of these days. ↩ Reply