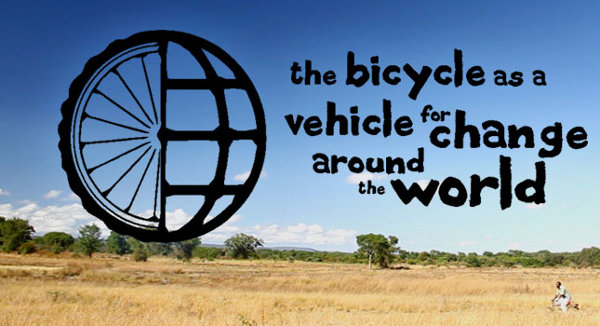 Because of my adoration for all things bicycle-related—but particularly because I had done some volunteer work at Maya Pedal in Guatemala exactly one year ago—I eagerly pre-purchased a pair of tickets to an independent film shown at the Lyric for Kelly and me. This movie was a documentary about the bicycle as a vehicle for change around the world, and I was interested to see how Third World countries besides Guatemala were benefiting from these useful two-wheeled machines.

If I had read up more about the film in advance, I’d have realized that Guatemala was actually featured in it. But that would have taken away a wonderful surprise to me. “San Andrés Itzapa—that’s where I was last year,” I nudged Kelly upon seeing the familiar scenery. Next thing I know the movie was showing Maya Pedal—the shop I worked at—and the person who founded the organization: mi amigo Carlos!

Carlos Marroquin was interviewed for about 10 minutes, and it was a pleasure to see his family in there as well. I had met his son Carlitos, but didn’t realize he had other children.

I was particularly pleased to see clips of his farm. I never got to visit it in person, but had heard about it from the other volunteers. I also read about it before going to Guatemala as Eric Goldschein (whom I also had the pleasure of meeting on my first day—his last day—at Maya Pedal) had written about how one of Carlos’ workers was attacked and killed with a machete there. Ugh.

Reminders of tragedy aside, seeing my friend and the bicimaquinas in the movie made my evening. It was also neat that Kelly could see where I was last winter holiday since I had told her a few stories of it earlier.

You can do so too, because the documentary can be viewed online. Below is a trailer.

The full documentary can be watched online at the film’s official website here. ¡Disfrutelo!