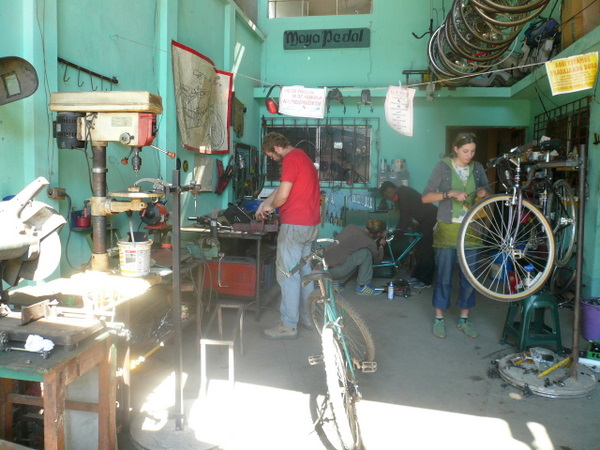 The volunteers at Maya Pedal are usually folks from a First World country who fit in one or both of these categories: 1) people who wanted to travel through Central America on limited funds, and 2) those who love bicycles and want to help make a difference in a developing country.

Typically, the volunteers are in their 20s and are either in college (and taking time off) or recently graduated without job prospects. However, some folks like Bruce and myself are in their 30s, and while I was there an elderly German couple that had volunteered with Maya Pedal four years ago came to say hello.

Not all volunteers have bicycle- or even much mechanical experience. They generally fit into Category #1. However, almost everyone acquires enough mechanical skill with time assuming they are staying at least a few weeks.

There is a radical element among the volunteers: those who enjoy smoking pot, do not want to work, love tattoos and are quite anti-technology. At least they generally care for the well-being of the earth and will do their part to compost and reduce plastic waste!

My Two Weeks at Maya Pedal

Michelle giving a demonstration of the bicilicuadora (bicycle blender) during a tour of Maya Pedal.