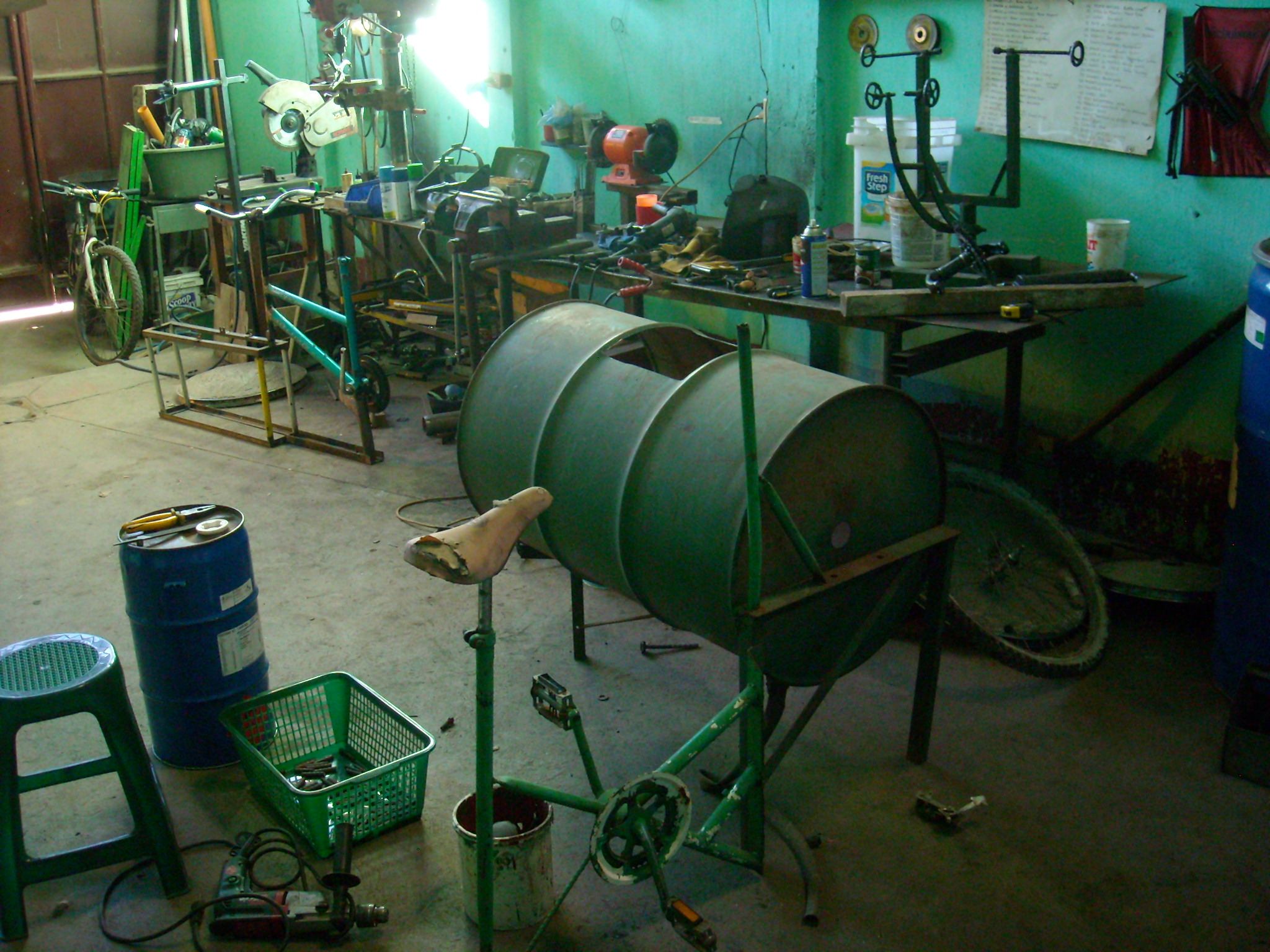 On any given day at Maya Pedal, the sounds of spinning wrenches or ratcheting freewheels can be interrupted by exclamations of “¡oidos!” (ears!) or “¡ojos!” (eyes) followed by a Haley’s Comet of sparks from an arc welder or rotary grinder. Or—as was the case on my third day in the shop—a rotary metal cutting tool I was using to cut out a 25-centimeter square section on the top of an inverted, rusty 40-gallon garbage can. This garbage can was to be the basis of a new experimental bicimáquina (bicycle machine) used to process beans.

“I feel like B.A. Baracus,” I observed at one point.

This was, after all, the type of skunkworks activity B.A. would engage in the 1980s’ television show, The A-Team. A usual skit had the A-Team being holed up while surrounded by men equipped with machine guns and grenade launchers, and in preparation to take them on, our heroes would build some sort of lethal contraption (such as an armored “tank”) using scrap metal laying around. (Conveniently, they always seemed to have access to welding and air-powered equipment.) In essence, they would turn nothing into something. Yes, including garbage cans.

Maya Pedal embodies the same spirit of resourcefulness. Items that most people from the First World would haphazardly toss into the recycle bin or landfill are often used to build labor-saving machines at MP. Stuff like bed railing, coffee cans, or even the tin cans that someone purchased refried beans in from a little old lady down the street.

These metal bits would be cut up, grinded, and welded:

They, they are turned into something useful, such as this award-winning bicibomba (bicycle water pump):

Bruce pedaling a bicibomba (bicycle water pump) in the mountains outside of San Andrés Itzapa.

All machines are rather crude and rudimentary, usually conceived straight out of Carlos Marroquin’s grey matter without the aid of Computer Aided Design software or even a pen and paper, but get the job done. Just like B.A.’s contraptions. The A-Team would have been proud of our work, I believe.

[…] grinders and threshers all depend on them. You can help keep the village going by taking part in building more bicimaquinas. Your job will be to collect, disassemble and rebuild the donated bikes and local materials so as […] ↩ Reply