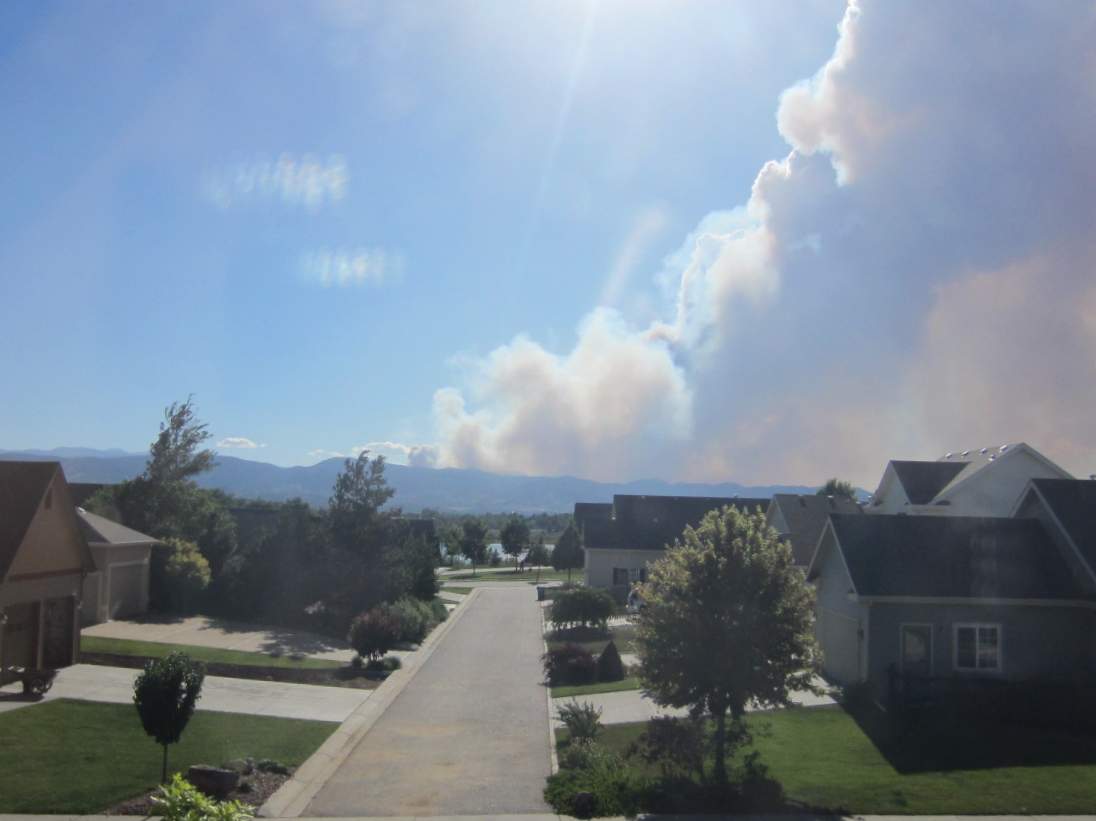 “Did you see the smoke?” asked my neighbor Dee. “It looked like a giant mushroom cloud.”

Why yes I did, I glumly replied. The windows of my home, after all, directly face the mountains. And the resemblance of the explosion of an atomic bomb is something I’d unfortunately see too often over the six weeks here in Fort Collins.

First there was the Hewlett Gulch Fire. That caused evacuations up and down the Poudre Canyon and destroyed trails near iconic places such as Grey Rock. Kelly’s mom who lives near the mouth of the Poudre nearly had to flee her home then.

A few weeks later was the Stuart Hole Fire 40 miles northwest of Fort Collins, closer to Wyoming. A safe distance away from most civilization, but very visible from my windows.

A few days after that was another fire in the Poudre Canyon right across the highway from Hewlett Gulch. It was contained right away, however, much to the relief of Kelly’s mother, I’m sure.

The relief was shortlived. Later that night was a massive lightning storm with bolts flying down every two seconds. There must have been another one the day after, because then the High Park Fire erupted of which lightning was determined to be the cause.

In fact, lightning lit three of the four wildfires we’ve had. (The Hewlett Gulch one was instigated by a camping stove that went awry.) Curse you, Zeus.

This was a conflagration unlike any other Fort Collins had seen. It started on Saturday, June 9th, 10 miles away from the house of Kelly’s mom. But the wildfire moved as quickly as 1.6 miles per hour, and by Sunday afternoon she had to evacuate. She told Kelly that she would be surprised if the house would survive, as she could see and hear roaring flames just over the hill. Indeed, after hours of looking at the High Park Fire and Evacuation Map, Kelly and I went to sleep 90% sure that her home had burned up.

Miraculously, despite the fire going through her property, the home survived. The Mazda MX-6 parts car that Kelly’s mom could not evacuate literally exploded in the fire, prompting firefighters to converge on the house and save the building. Kudos, firemen and firewomen.

But as I write this (over two weeks later) the High Park Fire is still raging with over 83,000 acres burned—the largest in Colorado state history. And it’s only 45% contained! Air quality, as you can imagine, has been really poor, rivaling that of San Bernardino or Bakersfield in California on the air quality index.

So I haven’t been partaking in many outdoor activities for a while. My daily runs have been limited to 1-2 miles, at an easy pace, so as to not pollute my lungs. Quality of life has been affected, although that seems trivial compared to the plight of many friends.

Several friends, for example, in the Horsetooth area have had to evacuate their homes multiple times. Kelly’s mom hasn’t been able to return to hers since the day after the outbreak. And over 190 buildings in the areas to the west of Fort Collins, including Rist Canyon, have been destroyed.

Due to dry and unusually warm conditions all over the U.S., there have been wildfires in Utah, New Mexico, Southern California, Nevada, and Arizona too. And there were a total of EIGHT in Colorado alone. Eight! The Waldo Canyon fire west of Colorado Springs prompted the evacuation of everyone in Manitou Springs. That’s 11,000 folks for those who are counting.

A week ago residents of Fort Collins did a rain dance in Old Town, and my kitties have been doing their own rain dance daily as well. We finally got some rain last night, thank goodness. Unfortunately it came with more lightning and the rain and hail—while impressive in its quantity—left the mountains mostly untouched.

Zeus have mercy on us, please.

Update July 1, 2012: The High Park Fire has been 100% contained and most people have been able to return to their homes now. Phew.