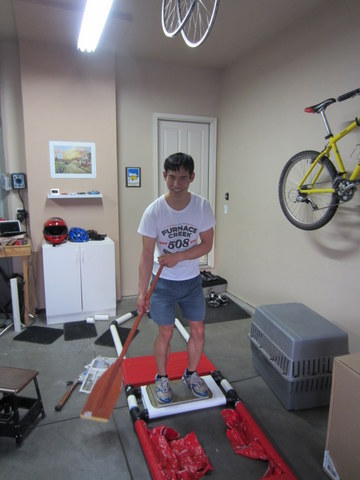 We had just watched two episodes of Mythbusters—one about creating a sailboat out of duct tape and another about surviving on a deserted island with only pallets of the famed sticky, shiny, silver stuff—so you can forgive Kelly and I for talking about how we should create a duct tape sailboat together. But then, in my sometimes rational mind, I decided perhaps this wasn’t such an Einsteinian idea. Surely, instead, I should start out with something less ambitious. Something quicker to build and wouldn’t require welding equipment, as the Mythbuster’s rebar-framed sailboat did. Something that would still float, but was a tad smaller.

“Let me try making a duct tape stand-up paddleboard first,” I resolved. “It’ll be for proof of concept and give me practice with working with duct tape.”

It seemed all so simple in my head: just create a frame out of PVC pipe and wrap duct tape around it. Make sure it is sealed well enough to preserve its buoyancy and voila! A paddleboard that costs a fraction of what a “real” one would go for brand new.

A back-of-the-envelope calculation even proved to myself that it would be able to support my weight. My design parameters were a 29″ width, 11′ length and 2″ (inside-diameter) pipe—which effectively gave a 2.5″ height. “It should be able to float with up to 240 lbs. on it,” I concluded.

So in early May I made a Home Depot run for the PVC pipe, fittings, and duct tape:

In mid-June I created a frame. With a compound miter saw this turned out to be quite easy:

So then it was just a matter of wrapping duct tape around it… which turned out to be extremely tedious. And after the first few hours of doing so, there was the first failure: the frame came apart at a joint. The PVC cement, it turned out, was not strong enough especially when considering that I was wrapping the tape with quite a bit of tension.

Unfortunately, when this happened, the tape collapsed onto itself, leaving a sticky, inseparable mess. There was no choice but the cut the layers of tape and try again.

My neighbor Tim then came over to help and we reinforced the joints with self-tapping screws. “These joints will never come apart now.” we predicted.

Hours later, our prognostication turned out to be wrong. Another joint failed, essentially ending the project. I had already wasted close to 10 hours on this, and it was not worth it to spend another 10.

“Maybe I’ll look for some other sort of water flotation device on Craigslist instead,” I concluded. Preferably one that was not made out of duct tape.

I am thinking of another approach. use 1/2 plywood for deck and three or four layers of. celetex blue foam...cut out the plywood and foam and shape like you would a surf board. make a port for your skag in aft section of foam..then wrap with duct tape. apply grip tape on top where you stand ↩ Reply