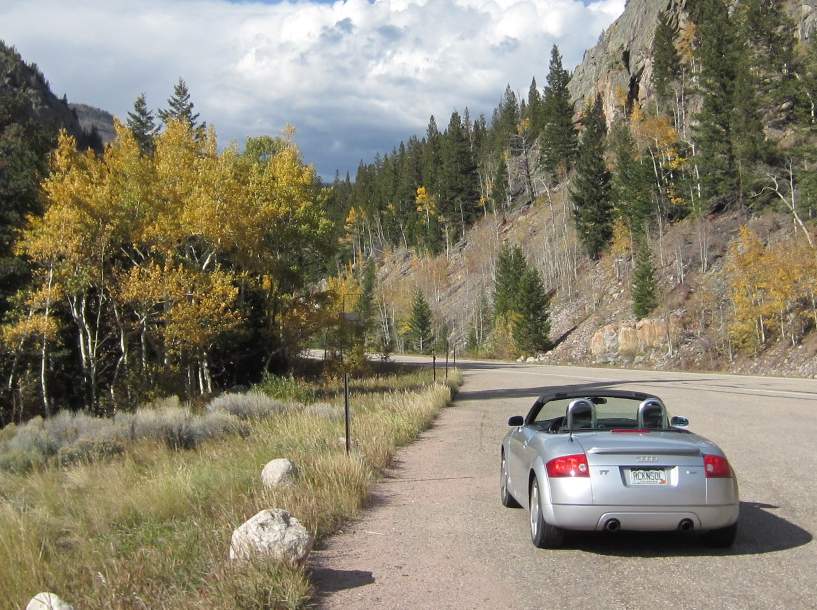 Mother Nature hasn’t exactly been too kind to the Poudre Canyon this year. In between several conflagrations, pine beetle kill, and drought, the once evergreen and majestic Roosevelt forestland had become charred and morbid in several regions.

But Mother Nature also heals quickly, something I was reminded of while bicycling to and from Walden just two months after the High Park Fire and was thinking, “This looks way better than I had imagined.” So I had few reservations about doing a motoring tour on Colorado Highway 14 to view the fall colors.

In Teeter‘s passenger seat was Colleen, who didn’t once complain as I see-sawed the steering wheel through the curvaceous canyon with the alacrity displayed by Robert Downey Jr. in his Audi R8 Spyder in Ironman 2. “This right here,” I pointed to an aluminum upside-down U located next to the E-brake, “is a grab handle.” She thanked me.

She also was the official photographer for this drive, snapping pictures of golden aspens popping out of groves of pine, or the virtual parade of Henry Ford’s “you can have any color that you want as long as it’s black” sedans from the 1920s climbing over Cameron Pass. Must have been a Model T club.

Our turnaround point was on County Rd. 103 by Chambers Lake, where the aspens were most ostentatiously vibrant. Seeing the lake, the Poudre River and the Poudre Falls may have given Colleen some inspiration because at some point during the drive she started talking about going for a dip in the water. “I dare you,” she teased at one point.

I don’t know if she knew that one of my favorite mottoes is “only those who dare, truly live” (attributable to Ruth P. Freedman), but that eventually got me to pull over some place where we could inconspicuously play in the Poudre, a river replenished by snowmelt and is notoriously chilly year-round. Never mind that this was probably some sort of ploy of hers to get me mostly naked.

The water was cold enough to evoke memories of a particular Seinfeld episode about shrinkage. And I think both of us were really hoping none of the other tree-gawking motorists would decide to pull over and get out anywhere near where the topless TT Roadster was parked. But, it was great fun.

Even after a summer of fury, Mother Nature provided the goods.