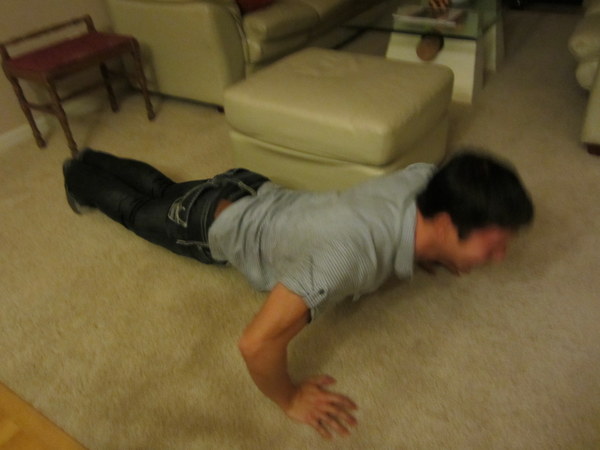 About a month before the new year, my friend Stacey called me. Half the time she does, it is to taunt or challenge me. This would be one of those times.

“OK,” I replied. After all, how do you say you can’t or won’t or don’t want to do this when the person asking you to join and support her is a mere 4’10”, 83 lbs., and has been operating on 60% lung capacity on two transplanted lungs for the last seven years?

Our friend Ashley, a crazy ultra-runner, was going to join in as well. That clinched it.

So 10 minutes after the clocks in Colorado struck midnight, I dropped to my knees and started busting out sets of 20 pushups each. By 2:00 a.m., I had already done 360. When I crawled into bed I was feeling pretty good. I had already banked 18% of my pushups, and there were still 22 hours left in the day!

There was also the issue of trying to get anything else done during this challenge. I figured I was going to have to do a set of 20 pushups every six or so minutes to finish them before January 2nd rolled around, and there aren’t too many things that one can accomplish in that amount of time. Reply to an e-mail? Whoops, missed a set. Wash some dishes? Tardy with another set.

Basically all I could do was reply to some Facebook posts, which there were many because Stacey was basically using the “Post to wall” feature as an instant messaging client. One Facebook thread soon became 67 comments long.

“How many are you up to now?” she kept asking. In the morning, I was still ahead of her (in part due to Colorado being one hour ahead of her Pacific Time zone), but not for long—particularly because she actually had a regimented strategy. She used a timer to remind her when to do pushups so as to avoid my distraction disasters.

“I’m setting the timer for two minutes in between sets,” she later explained. “I took a two-minute shower and had to do two sets naked in order to stay on schedule.”

“Too much information, Stacey!” I protested.

Soon I realized that in order to complete this challenge, I wasn’t going to be able to leave the house. This did not mean that I was a complete hermit because Kelly dropped me a line saying that she needed to get out of the house away from her roommates. She came over after I assured her that Oreo and Tiger weren’t going to mind.

She kept me company; we ate some egg rolls; I managed to get in sets of pushups between pages and pages of hilarity that is damnyouautocorrect.com. Still, I wasn’t quite keeping pace despite switching back to sets of 20 (I was doing sets of 10 between pushup #700 and #1000). I had to make quite a push after 9:00 p.m. by doing, say, 15-20 sets of 20 per hour.

By 11:00 p.m. the finish was in sight, although my arms had zombified enough that I could only do sets of 15 sometimes. Starting each set was the hard part as my chest and arm muscles started to combust.

But Kelly kept me going, even joining in on the pushup action. I think she did close to a hundred.

And at 11:24—or 23 hours, 14 minutes after I started—I raised my body up to a plank position for the final 2,013th time. After giving Kelly a hug for what otherwise would have been a torturous over-exercising session, it was time to call Stacey to report I was done.

“You’re on your own next year,” I told her. I know better to never say never but I am pretty sure no amount of taunting or challenging will get me to do 2,014 in a year.