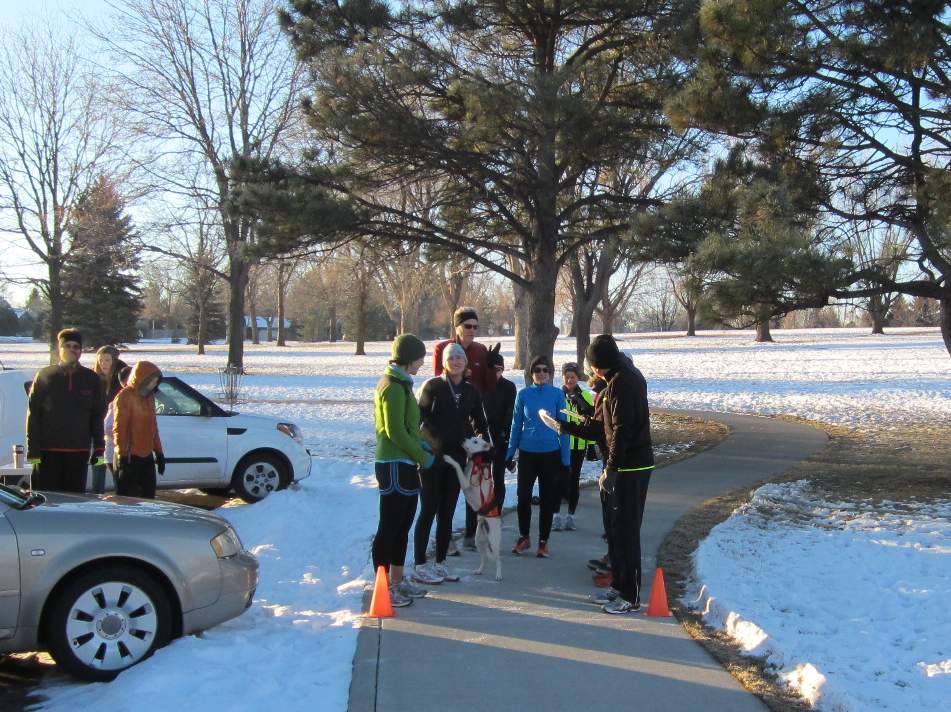 The forecasted low and high temperatures for today were 21 and 43 degrees Fahrenheit, so minutes before I left the house I was a little surprised when my phone indicated that the “now” temperature was just 11. Then a couple miles from Edora Park, Teeter’s dashboard was registering just 1 degree before settling on 5 in the parking lot.

At the race start, Nick’s beard was filled with icicles, and even Tom showed up in a down jacket instead of his signature singlet and shorts. Clearly, if the weather forecasters were the CIA, Congress would have been demanding public hearings for them.

Nevertheless, I still opted to run in shorts and Puma H-Streets mainly because I was dismayed at how much tights and trail-worthy New Balance MT101s seemed to be slowing me down in the Reindeer Marathon. This, of course, earned some teasing at the moment I took off, as someone even yelled “hey, we have a dress code here!”

But I think it turned out to be a good decision. Without neoprene restricting knee flexion, my legs felt amazingly free and I settled into a nice sustainable pace. Not super speedy, mind you, but sub-7:00/mile—decent (for me) considering the temps. And the distance. And my training, or lack of. Amazingly I was able to maintain that pace the entire way.

Final time was 34:27, which was almost two minutes faster than last year, although slower than every other year prior. (I’ve now done this race seven times). But it was never quite this cold.

I was even happy enough with the run to forgive the weathermen.