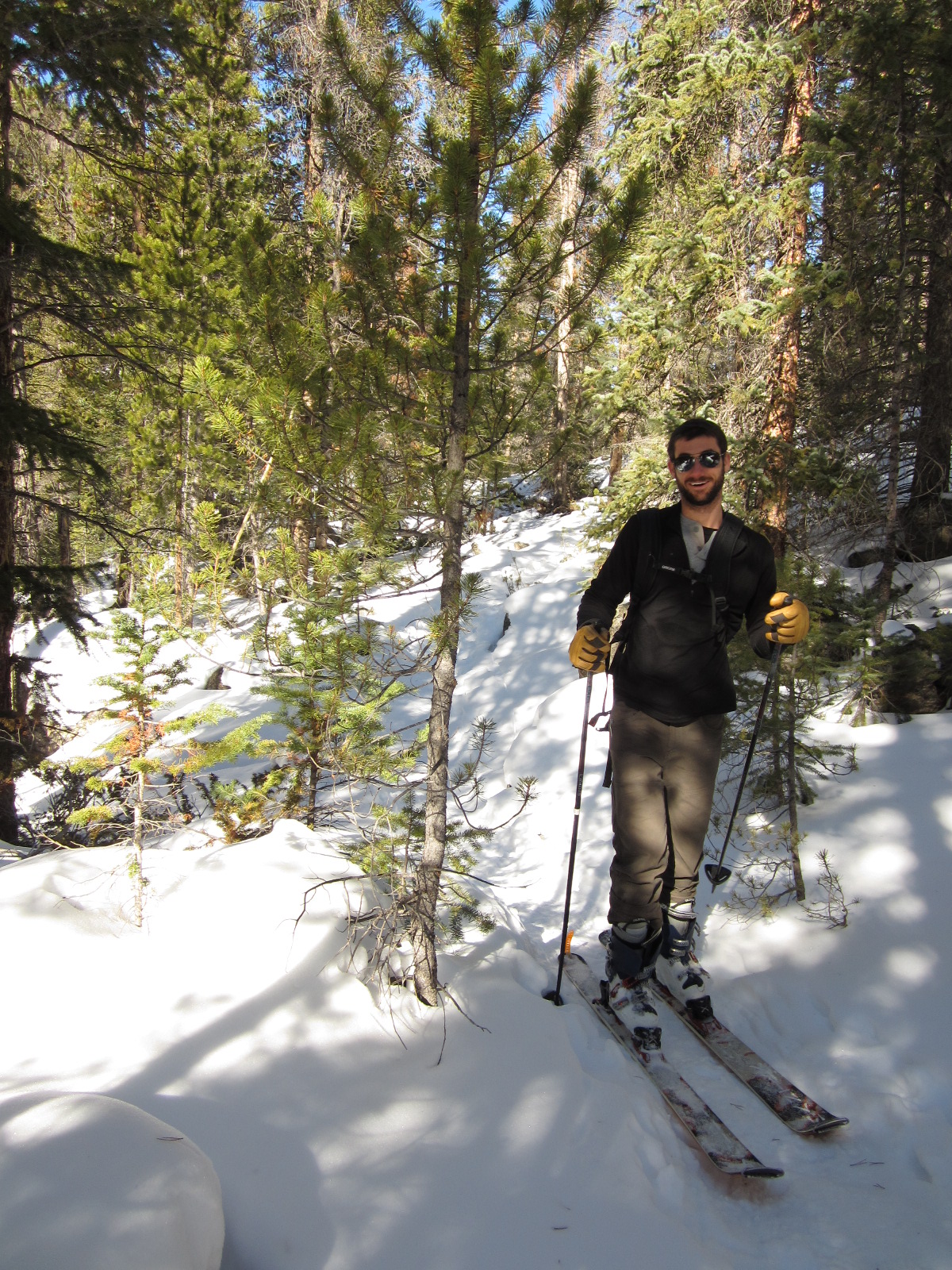 “I want to get outside before life starts again,” wrote my friend Casey, a grad student winding down her winter break like all the other folks at Colorado State University. “If anyone is interested in joining Saturday for some playing outside let me know. I’ve been wanting to try cross-country skiing, but I’d love to snowshoe or do whatever else that’s active too!”

As it turned out, for the last year or so I’ve had an interest in cross-country skiing, even going to a seminar at REI about it last winter. Kelly had even gotten me a gift card to be used for ski rentals, but due to the dearth of snow in Fort Collins last year I never got to use it. But this weekend was as good as any to try.

I picked up some rental skis ($17/day) from a local outdoors store called Jax in Fort Collins and carpooled with Casey and Tommy up the Poudre Canyon towards Cameron Pass to the Big South Trail where we joined Andrew, Danielle and Kyla. Everyone opted to use snowshoes except for myself and Tommy, who brought his new AT skis with skins. For both him and me, this would be something of a new experience.

We commenced on the Big South Trail which at this time didn’t really have deep enough snow to necessitate snowshoes, but had sufficient amounts to make cross-country skiing possible. Sort of, at least. The trail was very narrow and in the many sections that went up or down, it was nearly impossible for me to herringbone or plow without grazing a tree or the side of the trail with a ski. Eventually I realized it was just easier to clip out of the skis and walk these sections.

Actually, not only was it easier, but at times it was necessary in order not to get too far behind the rest of the group. Also, it was vastly safer as careening out of control and clobbering a tree or teeter-tottering down the ledge to our right was a real possibility in these areas.

Tommy had a much easier time. His skins seemed a lot more effective than the ribs on the bottom of my x-country skis for preventing me from sliding backwards on an uphill. His wider AT skis with rigid downhill boots also made descending with control easier. The downside is that walking in his boots were a lot more awkward than my flexible and comfortable rental x-country ones.

There were a few flat sections of a quarter-mile or so where I got to appreciate gliding along on my skis, though. The movement was smooth and quiet, and both my arms and legs seemed to be getting a gentle workout. It reminded me of all those Nordic Track exercise machine commercials from the late 80s and early 90s, except instead of sweating on some artificial limb-extending contraption in one’s living room, I was outside on real skis among the snow and pine.

I enjoyed enough that I came back home thinking I definitely should get a pair of x-country skis to use on my neighborhood recreation trail or the multitude of parks in Fort Collins. X-country skiing, after all, is an activity I can do locally without having to drive hours to a resort, as is the case in downhill skiing.

Now if Fort Collins would only get some snow. It’s been yet another dry winter.