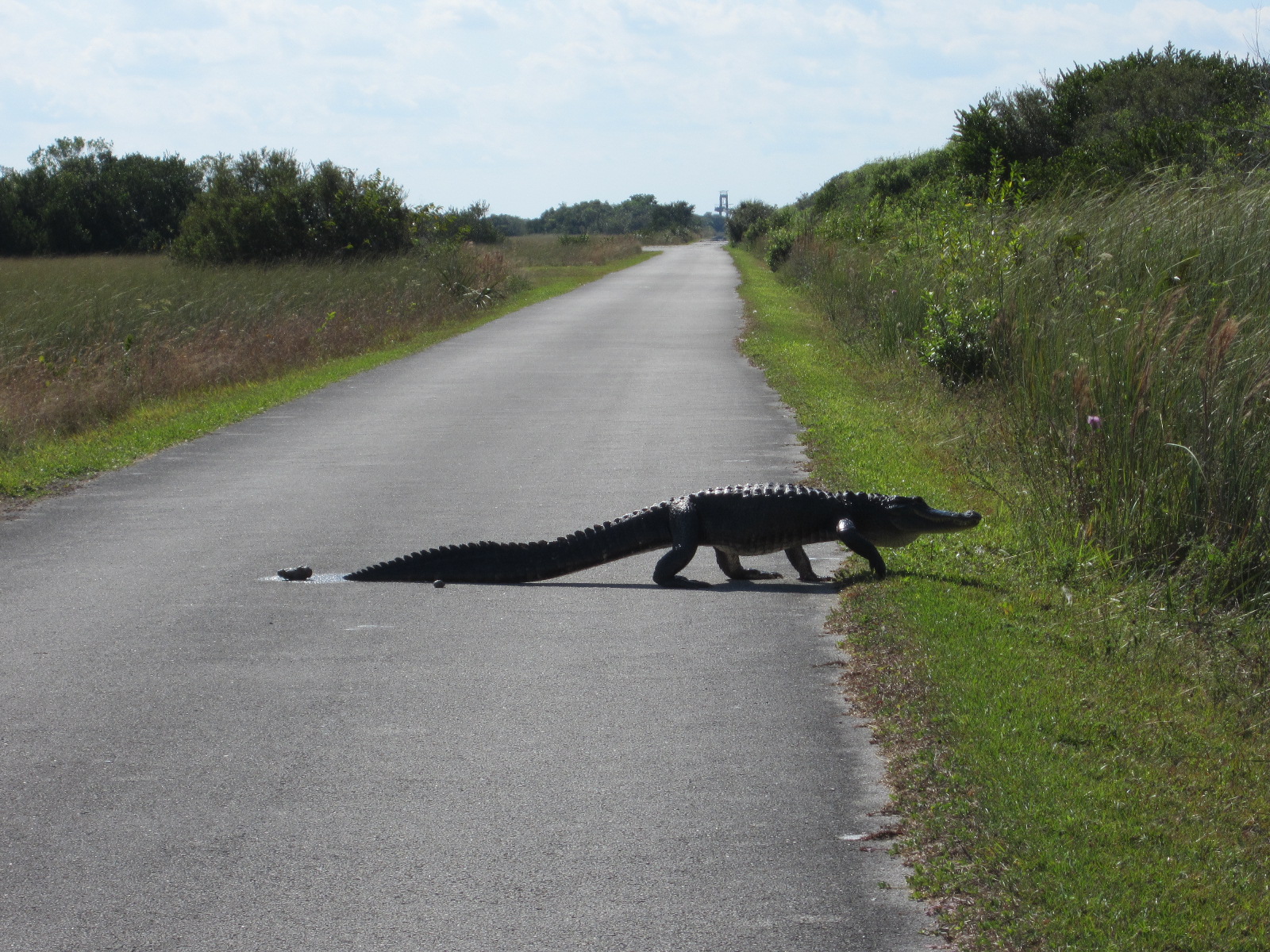 “I want to eat alligator,” I told Kelly before taking off for Florida several days before she did. Apparently, when she was younger, she already had tasted this reptile before and she assured me that, no, it did not taste like chicken. “More like seafood,” she said.

But before I was going to insert alligator flesh into my mouth, I wanted to see one alive. So after landing in Miami early in the morning after flying an uneventful redeye, I hopped into an impressively Audi-like Chevrolet Cruze rental car and drove west to the Shark Valley Visitor Center of the Everglades National Park.

Why Shark Valley? Well, the Everglades comprises a huge region in southern Florida, and this visitor center seemed to be the closest to Miami of any other in the Everglades. More importantly, they had bicycle rentals. I wanted to do some biking among the wildlife and the swamps, and there was a 15-mile recreation loop that started from here.

Shortly after throwing a leg over a sky-blue Atlas Sun cruiser bicycle, I already encountered two alligators along the side of the road. I immediately started shooting photos, sent some off to friends, posted one on Facebook, and basically started acting as if I had just encountered former members of the Beatles. Never mind that alligators were a dime a dozen, or at least there would be on average one every quarter- or half-mile for the rest of the ride. There was still some novelty in it, just as there would be if you had seen a few dozen other rock stars other than the Beatles due to being present at the MTV Music Awards.

I saw other creatures too: white ibises, crows, turtles, and wood storks. Many wood storks, in fact—including this one:

Due to more photo stops I was averaging only 7 miles an hour, but a bigger delay came a mile from a lighthouse—the halfway point of the ride. A dozen other cyclists had idled on the trail, and after I slowly weaved through them, I could see why. There was an alligator squatting in the middle of the road, almost perfectly blocking the entire width of it. No one wanted to get closer than 50 feet of this roadblock, so they all patiently waited.

“What should we do?” inquired one of the teenagers playing this waiting game. “Is there an alligator 9-1-1?”

I guess I had less patience than these people, because eventually decided that I would gingerly encroach and go around it. The game plan was to walk up to it quietly, and with the bicycle in between myself and its tail, pass it and then jump on the bicycle and pedal away as if I had just robbed a convenience store.

The last part of the plan never came into fruition because once I got within 15 feet of the alligator, it decided it really didn’t want to be that close to an amphipod connected to a blue double-diamond on fat hoops. So it sauntered away, which is when I took the photo at the top of the page.

The rest of the ride was much more eventful and turned out to be extremely pleasant. After finishing I drove over to Fort Lauderdale to begin my work day, but as it turned out, this would not be my last trip to the Everglades for that week.

I picked Kelly up from the Miami airport days later, and we were to meet her folks, Sally and Jim—along with Jim’s god-daughter and her boyfriend—in the Everglades for an airboat tour later in the morning. The rendezvous point was to be Buffalo Tiger’s, and it turned out that this was just a mile from the Shark Valley Visitor Center.

The tour was led by a guy named Randy—a young descendant (I think) of Buffalo Tiger, a Miccosukee Native American who led his tribe to gain official recognition from the U.S. government as documented by his book—who was superbly knowledgeable about this habitat and its wildlife and had ready answers for the two hundred questions we peppered him with.

We got to get nice and close to the birds and alligators in the wetlands, and then visited some huts that the Miccosukees lived in. The tour lasted about an hour and was well worth it from both an educational and entertainment standpoint.

Afterward we all went to the Shark Valley Visitor Center. The others decided to do a two-hour tram tour on the recreation loop, but Kelly and I preferred not to sit for that long and decided to rent bicycles instead. So I got to bike the 15-mile loop twice in five days. Interestingly, even on hefty cruiser bikes, it took no more time to circumnavigate the loop than the tram did. We even got to the midway point—the lighthouse—at the same time, so all of us got to go up it together.

None of us had anything to eat since the early morning, so then we decided to go the the Everglades Seafood Festival in Everglades City about 45 miles west. There was a live band and many vendors selling arts and crafts, but most importantly, there were booths selling food.

It was here I finally found some alligator to eat: fried alligator on a stick. It was super delicious with a fair amount of crunch before giving way to juicy tender meat, but not vastly different than something Colonel Sanders would have whipped up at KFC.