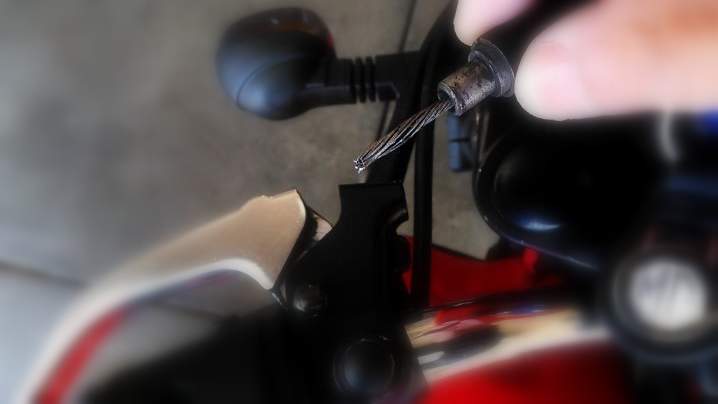 It was a beautiful November day, perfect for motorcycling. Having an excuse in hand—it was fetching groceries or going to an appointment; I don’t remember which—I donned my motorcycle jacket, helmet, gloves, and hopped on the Buell. I then grabbed a fistful of the clutch lever and—crap! The clutch cable snapped at its end at the lever. While I was thankful that this happened in the garage before I even started the bike, this meant a ride on the Buell would have to wait another day. The Audi would get the transportation duties for the next few months.

Part of the long delay was due to 1) procrastination on fixing the bike due to slight intimidation of never having done it before, 2) time it would take to research and order the correct parts, and 3) breaking the replacement clutch cable due to overzealous assembly. By writing this article, I hope to help other Buell Blast owners faced with this task avoid these three issues.

First off, I highly recommend having a motorcycle jack to do this job. It may be possible to do it without it, but I haven’t thought it through and thus it is beyond the scope of this article to do the job without it.

If you plan on replacing the transmission oil (might as well since you will be going through quite a bit of work to remove the transmission cover), it is mandatory to jack up the rear of the bike. Otherwise, it will be hard to refill the transmission with one quart of oil without it spilling out of the transmission fill hole. So again I’d suggest investing in a motorcycle jack (I use Harbor Freight #65620 which costs $35), borrowing one or else having a motorcycle shop do this job for you.

You will also need a “wiggler” (e.g., Harbor Freight #67986) to help you remove the left footpeg. Even with this tool to attach to a ratchet, the loosening the nuts for the footpeg is difficult. Without it, it is next to impossible.

You will also need some sort of oil drain pan to catch the oil you will need to drain from the transmission.

Below are the basic parts needed for replacing the clutch cable:

Total time for me to do all this was about three hours. It was quite involved as you can guess from all the steps above. It is much more difficult than, say, replacing a shifter cable on a bicycle.

Of course, the effort was worth it once I was able to get back on the road for the first time in several months. Just in time for springtime, too.

Good luck and if any steps above are unclear or you are confused, feel free to leave a comment below.

Glad to see someone still rocking a Blast! I always thought they were cool bikes, nice and simple. The essence of motorcycling.

I sold my Buell Ulysses in Sept to fund a major home remodel. The motorcycle shaped hole in my garage will probably be filled by a Blast. Gotta love thumpers!

Keep the rubber side down!