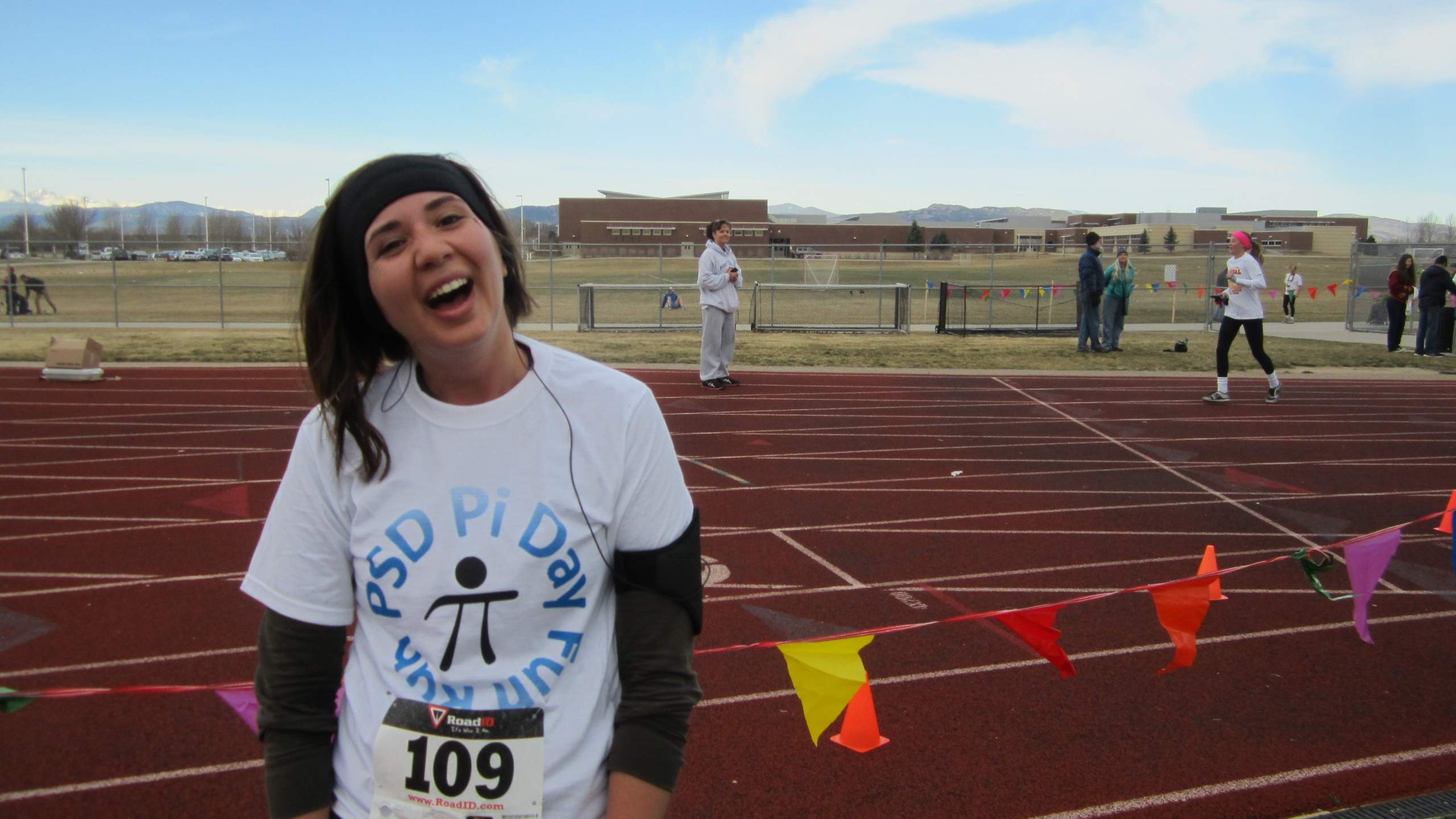 Nerd alert! When I was six years old, my dad would make me mentally convert degrees Fahrenheit to Celsius and vice-versa—and I could accurately do so in about the same amount of time it would take to Bing it nowadays on a smart phone. By third grade I was solving two-equation, two-variable chicken-and-dog algebraic problems. In tenth grade I scored a 5 on the AP Calculus exam and was done with math until college. It is probably safe to say, then, I have always been something of numbers geek.

So what a delight it was to receive an e-mail informing about a newly held, low-key race that would benefit the math departments of the four high schools in Fort Collins along with a local math scholarship. This being March 2014, the race was called the Poudre School District Pi Day Fun Run 5k and was clearly honoring my very favorite number. Never mind that the official Pi Day was two weeks ago on March 14th, or that the race was not officially five kilometers (3.11 miles) but pi miles (3.14). Or that “I know this math department; the distance probably won’t be that accurate” joked my friend Alex, a math teacher in Loveland.

Strange as it may be, hardly any of my other friends must have shared the same enthusiasm for math or pi because only one of them, Diana, came out for it. Yet the turnout of maybe 150 people was greater than either Alex or I expected, and I was particularly enthused to race against high schoolers on their home turf even if it would likely result in a healthy serving of humble pie to yours truly instead of the teenagers. But Alex told me that high school cross-country teams were not supposed to run in citizen races such as these, sparing us the humiliation of being beat by the likes of Justin Bieber.

Indeed, as the race got underway, it would be a handful of 30- and 40-somethings duking it out at the front instead of the young ones.

I lead the charge across the start line and was the front-runner for the first 1.2 miles of grass and dirt. But four others were bunched up right behind me and after that first mile-and-a-quarter, a balding man made a decisive pass and bolted a good 10 feet in front in the span of two seconds.

I felt helpless to respond despite Alex urging me behind my right shoulder to “go get him,” so another quarter mile later, Alex came around me in pursuit of the lead man. As I was starting to experience gastro-intestinal distress and I was slowing in order to avoid pooping my pants, I was now rooting for Alex to catch and overtake him.

Instead, a couple minutes later another runner came from behind and passed both me and Alex. With about 600 meters to go one more runner passed me, my lungs were already redlined and my ability to challenge him on the final stretch of the Fossil Ridge High School oval track was only impressive in its feebleness.

The final result was a time of 20:51 and fifth place overall. My pace was not as good as I was hoping for but not terribly disappointing for a cross-country course. It was particularly exciting to be running at the very front for the first third of the race. Alex was pleased to come in top three especially since that awarded him a really cool trophy with the Greek letter pi on it.

Meanwhile, Diana was putting on the race of her life. In fact, she came in so much earlier than I was expecting that I never even saw her round the track until she had crossed the finish line. Despite an effort worthy of being the fifth place woman she even managed to look photogenic at the end, as pictured at the top of this post.

As it turned out, the course measured exactly 3.14 miles per my Garmin GPS watch. I guess we should have expected nothing less than utmost precision for a race put on by a math department despite Alex’s earlier quip. They are undoubtedly numbers geeks too.