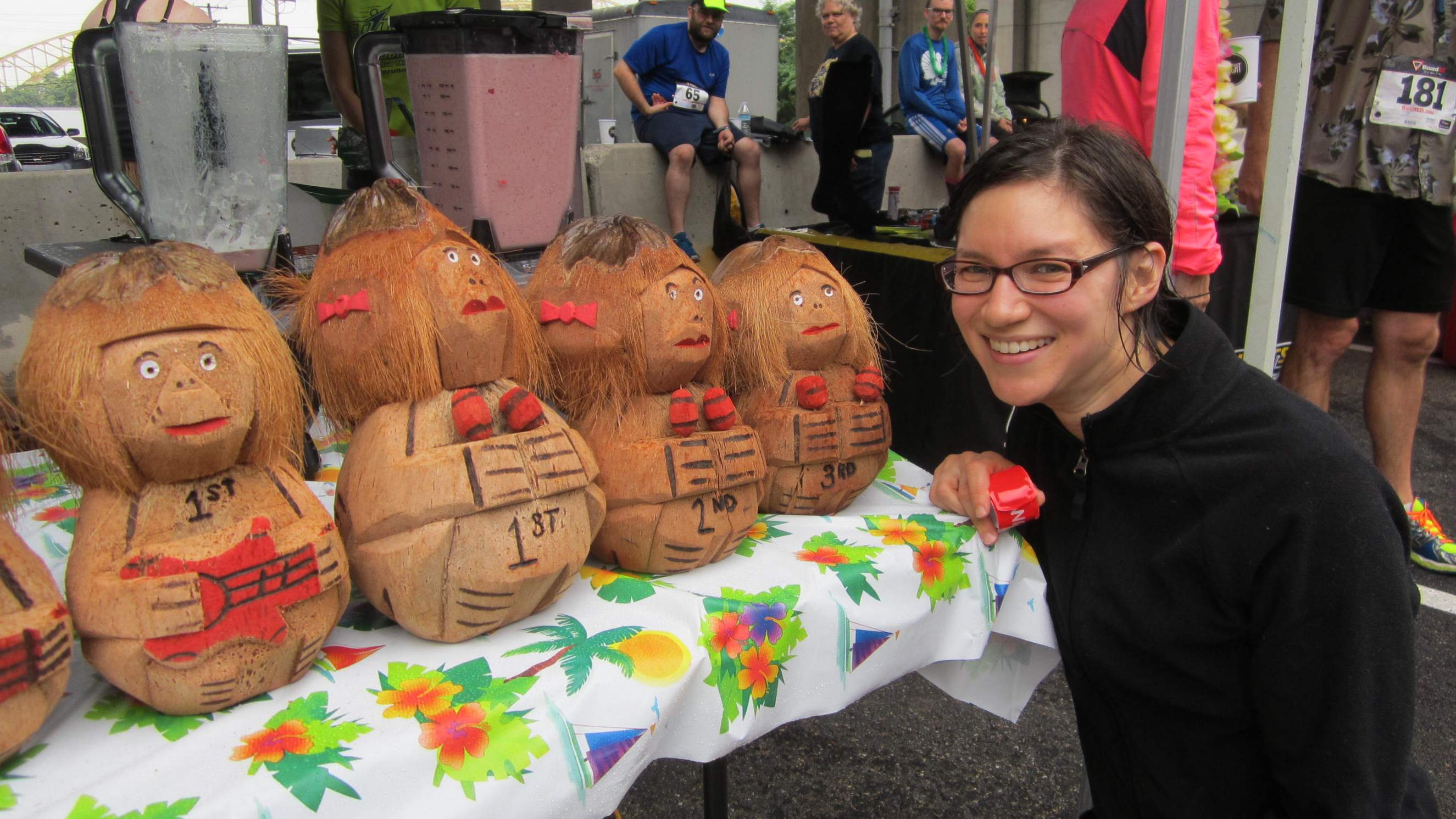 It was raining hard when I picked up my friend Sarah at the Pittsburgh International Airport at 6:30 in the morning, but neither the dreary skies nor the lack of sleep for both of us would dampen our enthusiasm for running the Hula Hula Hustle 5k downtown. “A good way to start the weekend,” I said.

So we registered for $20 each (very reasonable despite carrying the normal $5 penalty for signing up on day of the event) and talked with some of the runners, most of whom looked both young and very fit. The event was put on by the Steel City Road Runners which apparently has about 1000 members, of which about a whopping 250 come out each week for a group run. The course was out-and-back on the River Trail, and the awards—awarded to the top three overall men and women—were some of the coolest ever claimed, them being carved coconuts. If I needed to be given even more motivation for a good result, this was it, although after seeing the eager competition toeing the start line in the waning moments before the race, I ratcheted down my aspirations to a top-five finish. It remained to be seen how well I could run in a 60-degree rain.

Soon after we all took off, there were already five or six men in front of me, despite the Garmin on my wrist reading 5:55/mile pace. The pace felt comfortable but brisk, and I soon settled into a strategy of running my own race instead of trying to keep up with the speedsters. They all looked like they had some staying power, but my plan was to run steady for the first half, notch up the intensity just a tad in the second half, and then increase it yet more for the final quarter mile. During Tuesday Night Track practice earlier in the week in Fort Collins where we were running 8X 400-meter intervals, I ran the final interval at 4:50/mile pace, so I actually had quite a bit of confidence that I would be able to have a strong finish, especially since we were at an oxygen-rich elevation of 700 feet instead of the nearly one mile high I was accustomed to.

Happily, the race actually went according to plan. I was passed by a man at Mile 1, and by the turnaround it looked like there were six or seven who had at least a 20 second gap on me, but I was able to pass one of them after Mile 2. With half a mile to go I caught up to another who then ran side-by-side for an eighth of a mile, until I picked the pace up further, gapping him.

There was now another runner firmly in my gaze, along with the banner that read “FINISH” in the distance. I glanced at my watch and, incredibly, a sub-19 minute finish looked within my grasp! Remembering my narrow 2-second miss of a sub-20 minute finish a couple weeks ago due to not sprinting all the way through the finish line, I kept the pedal to the metal and did not let up until a couple steps beyond the line. I couldn’t quite catch the runner in front of me (if I had another 100 meters I think I would have), but I was still smiling when I ticked off my watch.

18:55! (18:58 official.) A new personal record for myself, something I haven’t attained at any distance in at least four years! I also ended up finishing fifth overall, just two out of the awards. Turns out the guy I had nearly run down at the end and who beat me by four seconds was just 15 years old, making it the second (third? fourth?) race in a row that a teenager beat me, but at least no 9-year-olds finished ahead of me like on the Fourth of July.

Sarah—who had predicted she would need 32 minutes to finish especially since she hasn’t been running much lately—also did really well at 25 minutes and change. That may have been a PR for her as well; I’m not sure. In any case, I felt we were deserving of the berry smoothies the race volunteers were blending at the end.

Thank you, Pittsburgh, for the best race I have run all year. Even if it would continue to rain the rest of the day.

My Garmin read 3.04 miles (and 6:13/mile average pace), suggesting that the course was .06 miles short. If this was indeed the case, then my “true” 5k time would have been 19:20. That still would have been a personal record for me, so I am happy with the result.