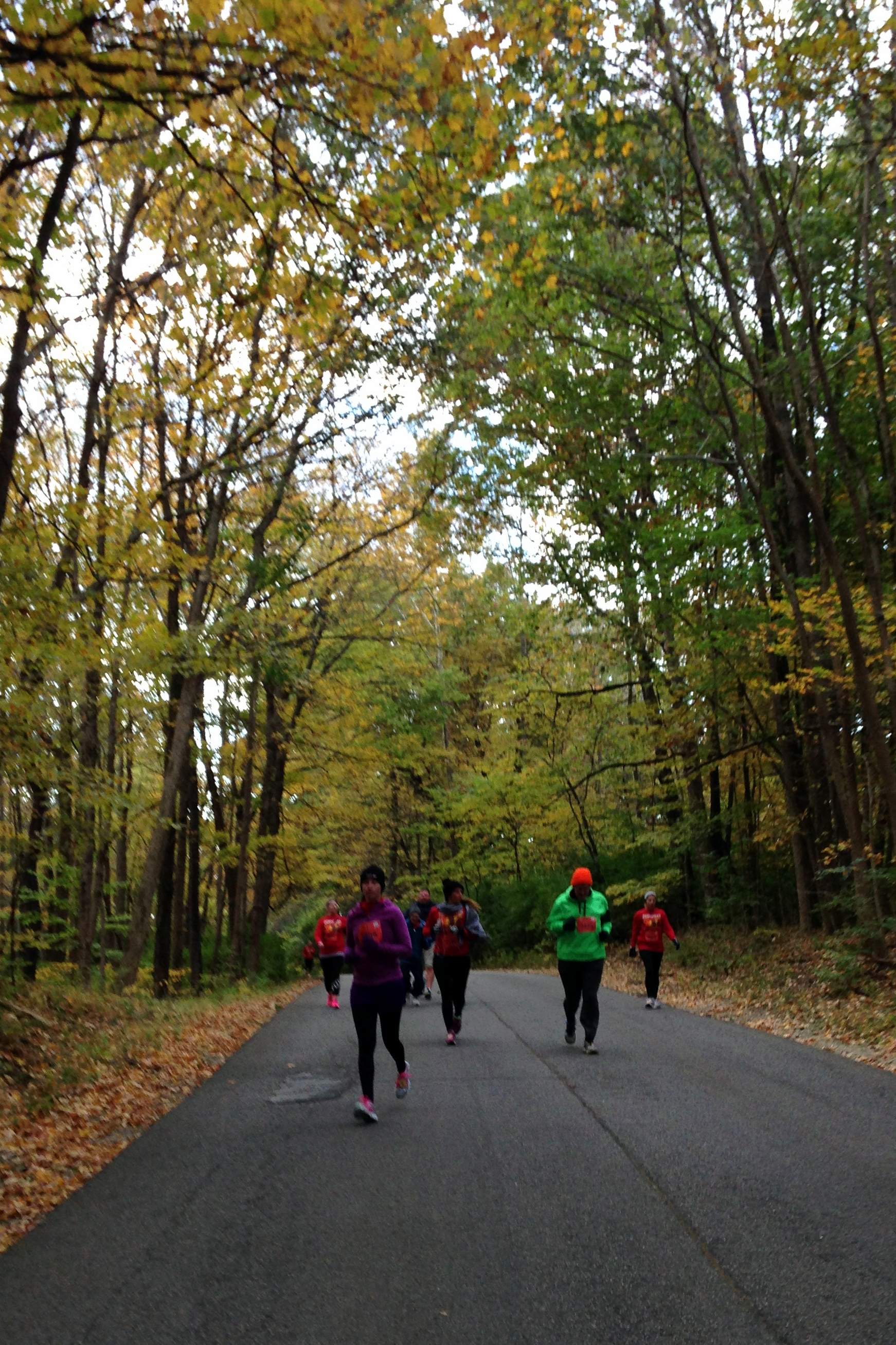 “Running the Indy Marathon this weekend,” I wrote my friend Adam. “Initially I was thinking my goal would be 3:45 but realistically (with no runs over 6 miles since May) I’ll be happy with sub-4 or, failing that, being able to run the whole way.

“I’m going to try to run the marathon at a sub-8 minute pace as long as I can. When my legs become shot it will be hard to maintain a 10 minute pace but hopefully it all averages out to be under 9 minutes!”

It sounded like a reasonable plan. But the lack of runs over 10k distance during the last 20 weeks–and only two double-digit runs (10 and 13.1 miles) since the start of the year—was concerning. My best marathon performance with no double-digit training runs was the 2013 Rock ‘n’ Roll Las Vegas Marathon, finishing in 3:48—and that was a pancake-flat course where I also still had an altitude advantage. Other marathon attempts without distance training resulted in much worse crash-and-burn times.

There was some cause for optimism including perfect running temperatures (high-40s) and training that included numerous sprints in the form of short Strava segments. So I was not being a complete loafer in preparation. Also, a few days before the race I listened to a Radio Lab podcast called Limits which by talking about the Central Governor theory made me think that maybe I could “trick” my body into performing better than it otherwise would. There was only one way to find out.

I began the race at the very back of Wave A running conservatively, hardly breathing, trying to run the shortest lines possible around corners. When other runners passed, I did not speed up. I kept my footsteps light and breathing well under control and made a point to make no conversation, only uttering the word “thanks” now and then to the volunteers passing out Gatorade or spectators enthusiastically offering encouragement.

Eventually, I settled into a rhythm and found myself running next to a woman in pink who, I learned from the spectators yelling out the names on our race bibs, was named Ashley. Her stride length and rate was exactly the same as mine and we ran side-by-side for an hour-and-a-half, all without saying a word to or looking at each other. Still, I appreciated the company enough that when she finally peeled off the pace at about Mile 14, I tried sending positive thoughts her way and hoped she would stay strong. (Ultimately, she finished only two minutes after I did.)

By Mile 16 I was still in good shape and was explicitly thinking to myself that I had paced myself and conserved energy about the best I possibly could have. During Miles 17, 18, and 19 my legs were slowly tightening but nothing alarming. Mile 20 is when my pace started to falter significantly and it was then that the race turned mostly mental.

In the past, when my legs would start tightening, hurting and be on the verge or cramping, I would try to either try to ignore the pain or back off a little while keeping the legs moving and telling myself that the end was near. But telling myself either consciously or unconsciously that “I’m close,” I think, has usually had a deleterious effect, causing my body to start shutting down towards the end regardless of whether the race distance was a mere 5 kilometers or 26.2 miles.

So this time I tried taking a completely different tact. First, I acknowledged the pain, even thinking to myself that it was “good” that I was feeling such fatigue, because according to the aforementioned Radio Lab episode, this meant that my virtual gas tank was still a quarter full. (The podcast said that the Central Governor starts giving false signals to the brain in the form of pain far in advance of depleting the body’s resources.)

Second, instead of thinking “only [26.2-X] miles to go,” I imagined that I was actually in a 100-mile race and there was actually double ([26.2-X]*2) the distance to go. So at Mile 21, I was thinking “there’s still 10-12 miles to go” and—perhaps due to brain fogginess or the frequency of thinking such a thought—actually believed it.

The benefit of thinking I was in a 100-mile race was that despite the pain during the final miles of this race, I would have been ecstatic if this was how “bad” I was feeling during the last few hours of a century run! So the pain didn’t seem so terrible. And by doubling the distance left to the end in my mind, my body was not getting the message that I was “so close” or that it was ok to start shutting down.

A third thing I did actually during the entire race was to take one mouthful’s worth of Gatorade at the aid stations every couple of miles, and then swishing it in my mouth for 30-60 seconds instead of quickly gulping it. This was also inspired by the Radio Lab podcast which cited a study where there were three groups of athletes: one that did not drink a sports drink, another second one that did, and a third that swished the sports drink in their mouths for 60 seconds but then spit it out, thereby imbibing virtually none of the the calories or fluid. Apparently, the third group’s endurance increased as much as the second, suggesting that the mere act of swishing and tasting the sports drink could fool the central governor.

These three tactics seemed to help significantly. I still slowed down in the final miles because my legs were in a deal of hurt, but the Strava data showed that my grade adjusted pace (GAP) worsened by only about a minute per mile between Miles 19 and 26 to about 9:30/mile pace. This is significantly better than other no-long-training-run marathons I have done; for example, in the Las Vegas Marathon, my pace during the final three miles varied between 10:06-11:36/mile.

It turned out that I even beat the 3:45 goal (half-heartedly set six weeks ago when I signed up) that I stated to Adam, one I really thought was not going to be achievable by the time I crossed the start line. I was very pleased. It seems that I was successfully able to trick the central governor on this day.

About the Race Course

The course was gorgeous with colorful fall foliage through Fort Harrison State Park, small gentle hills and no car traffic. There were plenty of aid stations, enthusiastic spectators, and great post-race grub. The cost of the race at $85 (including online registration fees) was reasonable even a month before the race. There were nearly 600 marathon runners but because of the staggered wave start it never felt crowded. The organization was first-rate. Highly recommended!