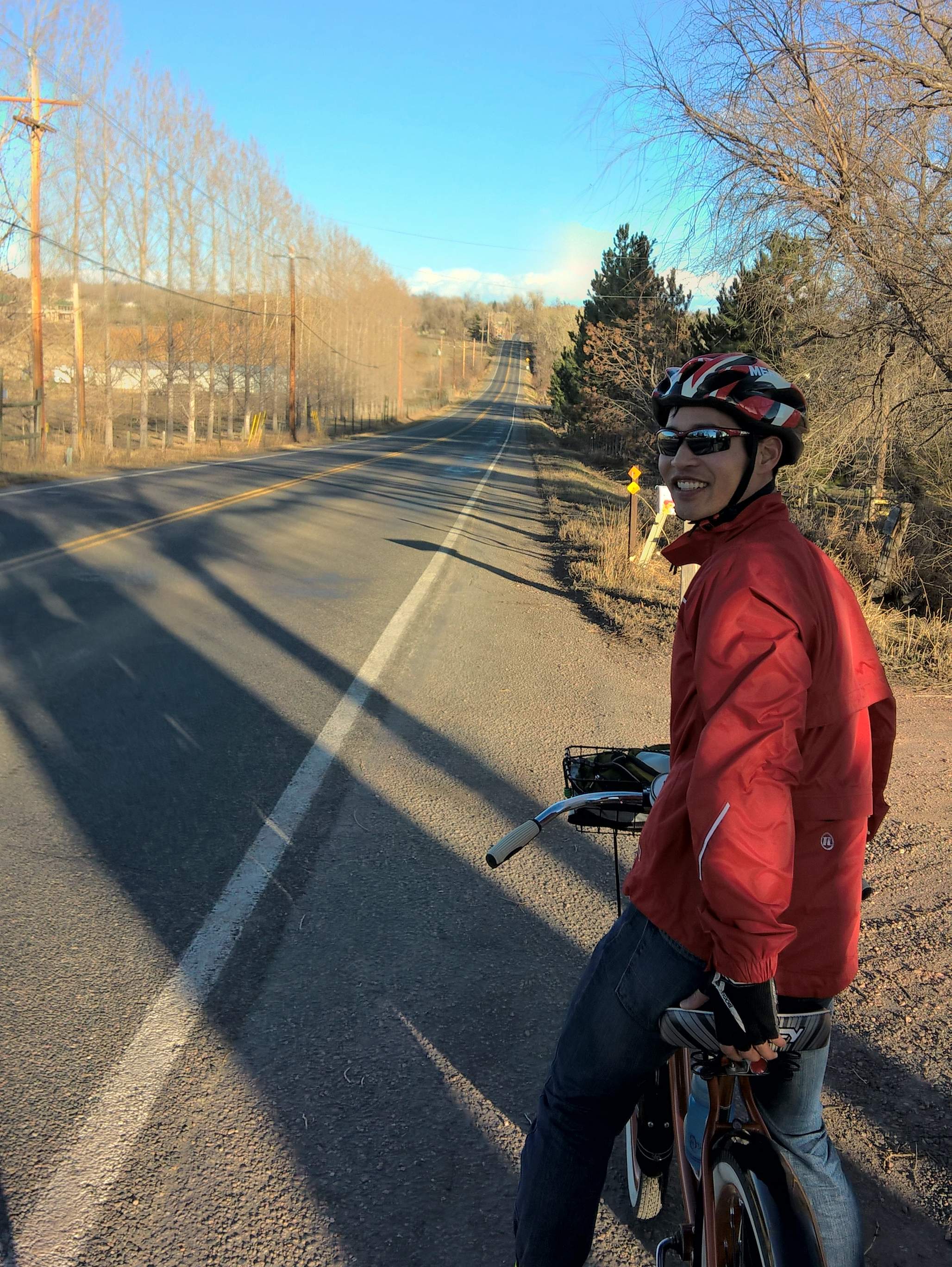 “Alberto,” I hollered one sunny afternoon. “I’m going to ride over to Bingham Hill in a little bit. Wanna come?”

I figured my thin and tall friend would be up for it. He likes bikes, is in reasonable shape, and it was a super sunny Colorado afternoon in February that was a colorful contrast to the 18 inches of snow we had gotten just 18 days prior. The distance would be, oh, around 20 miles. Long enough for a pleasant afternoon interlude, but well short of anything heroic. I had friends who had already run more than that this morning.

Alberto, however, was not immediately convinced. “Isn’t Bingham Hill, well, hilly?” he asked.

“It’s not that hilly,” I replied. “It’s neither long nor steep.”

I could tell he was still pondering quizzically, so I added, “For example, it’s something I’d be comfortable riding the Huffy up on.” Not that I was suggesting that–

I vacillated for a few moments as I had fully intended to ride my trusty Cannondale road bike—or at the very least, one of my other four bicycles that had more than one gear. But Alberto would have none of it. Either I handicap myself by riding a 40-pound boat anchor, or he wouldn’t join.

Ultimately I conceded. “It’ll be an adventure,” I proclaimed. And an half-hour later, off we went.

The ride started out uneventfully enough. Rounding my neighborhood in a lacksadaisical manner, sitting upride with only a couple fingers on the swept-back handlebars, I was thoroughly already enjoying the ride.

That is, until we turned west. Stiff wind. Alberto, riding in the drops, offered to ride up front and let me draft. Good friend.

At least for half a mile. I took over the wind-breaking duties after that, virtually hugging the handlebars while staying to stay somewhat aero. At that point it dawned on me that maybe I should have raised the seat to a height at least somewhat approaching Greg LeMond’s formulaic .65 X your-inseam-measured-to-the-top-of-a-book-jammed-up-in-your-crotch guidelines.

As it was, the Huffster’s saddle was slammed to its utmost lowest position, much like a lowrider Harley. Hey, style points.

We descended Douglas Road and this is when I was realized that the road between my house and Bingham Hill are not exactly flat. In fact, there were at least three good rollers that required out-of-the-saddle efforts. Short ones, though—maybe three stanzas’ worth of Queen’s Bicycle song.

Getting over those gave me some confidence, though—like “the Huffy isn’t that slow after all!”—as we rolled by a reservoir, an old ranch home with a couple dilapidated, but classic, 70s sports cars, and terrain the color of hay. There was one more hill before a two-mile stretch over to Bingham, a gradual jaunt past a cement factory. A semi-popular ribbon of pavement for the occasional sportbike or two who likes to open up the throttle away from the watchful eyes of Larimer County’s law enforcement.

We didn’t make it.

Or rather, I should say, one of us didn’t make it. I actually made a huge effort to go up the hill, fully bent over to stay aero while stomping on the pedals, rocking the bike back and forth as I tried to extract the maximum potential out of the cruiser bike’s lone gear. When I got to the top I was ready to give a victory salute and proclaim, “we did it; on to Bingham” when I looked behind and saw that Alberto was riding in the opposite direction. He had turned around.

A couple miles later—after I had given chase the best a basket- and coaster-brake-equipped bicycle can possibly give—he explained why.

“I was getting blown off the road!” he exclaimed. Or actually, that the wind kept blowing him, his vintage Raleigh and its wispy road tires into the road, to the point that it was getting dangerous. Or at the very least, uncomfortable. So he decided he had enough and started to head back.

We still had to go up the three aforementioned hills and the Douglas descent, which in reverse was actually the Douglas ascent. The incline, I noted, was actually quite similar in length and steepness to Bingham Hill. By this time we had a strong tailwind to practically blow us over the top of it.

We were less than a couple miles from getting back to the start of the ride when Alberto yelled, “check this out.” On the side of the road was a large, lifeless raccoon. There are all sorts of wildlife in this part of the Front Range and we stopped for a quick photo op.

When we got back we agreed it was a pretty good ride, even if it was abbreviated to 12 miles from the initial intention.

“I’d do it again on a day there was no wind,” said Alberto.

Maybe then the Huffy will make it over the top of Bingham Hill. Or at the very least, get there.