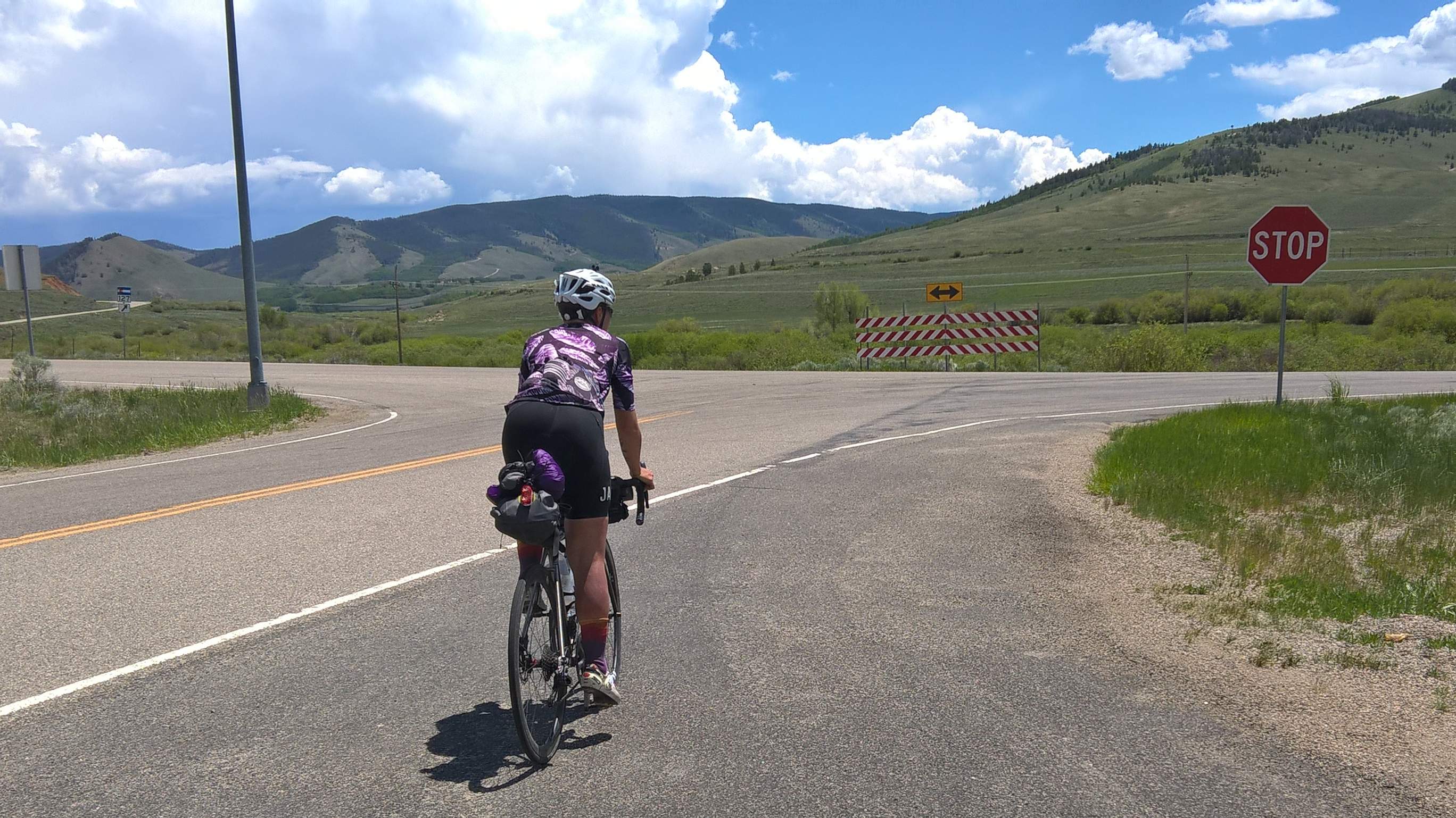 I had an flight to catch from Denver to St. Louis later in the evening. But I thought it would be fun to cheer on the two leaders of this year’s Trans Am Bike Race in Walden, plus the weather forecast promised a beautiful day for a road trip. So I swung a leg over the racy red Buell motorcycle and followed along the winding highway through the gorgeous Poudre Canyon over to the small Coloradoan town that is 100 miles from my doorstep in Fort Collins.

Thanks to the SPOT satellite tracking devices that all the racers were carrying, I was able to pinpoint where the leaders were and, happily, arrived in Walden 40 minutes before Steffen Streich of Lesbo, Greece rolled into town. I ate my customary Walden convenience store microwave burrito before heading north down the road, and shortly after I saw a bicycle with bikepacking gear roll into the parking lot of North Park Supers. Then I parked the Buell and strolled into the supermarket.

I found a tall, lean cyclist perusing the cooled beverage aisle. “Steffen?” I inquired. The man looked up, not remotely fazed that some random person just called out his name in a cowtown 6,000 miles west of home. The conversation went like this:

“She’s [Sarah Hammond] behind me—”

“How are you feeling?”

“I have read your blogs, everything to be prepared. Very nice.”

“Ok! I’m glad I was able to catch you; I rode over from Fort Collins. I live pretty close, about 100 miles from here. But yah, you better get going.”

“Thank you. Thank you very much.”

Steffen then rounded the grocery store carrying a red plastic shopping basket. Outside the supermarket, I talked with him a couple minutes more as he refilled his water bottles with water and packs with food. He seemed to be in pretty good spirits but he mentioned that for the last 24 hours his legs were really puffy. He also said he never had such swollen legs before and that he drank some coffee to see if its diuretic properties could help the excess fluid drain more quickly.

He then took off and I rode a couple miles down the road to get this action video of him leaving town.

Next up was Sarah Hammond of Rosanna, Australia—a town just outside of Melbourne. She is a well-known endurance cyclist from Down Under, was mentored by last year’s Trans Am Bike Race winner (Jesse Carlsson), and was leading the race for a couple days before going making a wrong turn and riding 80 extra off-course miles in Montana. As she was 20 miles behind Steffen at this point, I decided to ride down the road 15 miles to wait for her. I did not have to wait long.

“Hey Sarah!” I greeted her as she approached a stop sign in the middle of nowhere, again mentioning my name.

“It’s funny,” she replied, “but I was thinking of you a little bit ago back there because my neck was starting to feel very heavy.” Apparently, she had read my account of Shermer’s Neck from last year’s race. She also mentioned her legs were puffy and that she suddenly was having a hard time going up the hills.

I commiserated saying that I thought the stretch between Rawlins, Wyoming and Walden, Colorado was pretty hard, but not wanting to slow her down any kept the pleasantries short. I rode ahead to Cowdrey and then Walden to cheer her. Here is a video of Sarah riding just north of Cowdrey.

You can kind of see in the video that Sarah was experiencing some neck discomfort with occasional head bobbing. What I did not realize was that she was feeling bad enough that she’d rest in Walden for 16 hours, deviating a lot from sleeping only 2-3 hours a day for the first 1700 miles of the race.

Unfortunately, I could not stick around any longer to wait for Evan Deutsche of Portland, Oregon—last year’s second place finisher—and Lael Wilcox of Anchorage, Alaska—the Tour Divide‘s women’s course record holder. They were another 70 miles back. But I had a plane to catch in Denver and would be in St. Louis visiting Maureen for the next four days.

The two Walden encounters were not the last I’d see of TABR cyclists.

Not even 12 hours after returning home to Fort Collins, I got a Facebook message. It was from my friend Michael Wacker, my German rival from last year’s Trans Am Bike Race. He had to abandon the race a couple days earlier in Rawlins, Wyoming due to knee pain, a condition he had told me about even weeks before the race.

“Felix…it is short notice but do you have or know place to sleep in Fort Collins the next or maybe the next two nights? I am on my way to Denver airport and my flight leaves Saturday morning?”

Of course, I was happy to host Michael. So a couple hours after providing my address he appeared at my doorstep riding a new ultralight, matte black Canyon road bike (as opposed to the white Specialized triathlon bike he rode last year).

“Hello my friend!” I greeted him as we laughed about meeting again. He had ridden over from Rawlins to Laramie, and then from Laramie to Fort Collins down Highway 287, which would be the last he’d ride in the States. At least for now.

It didn’t take too long to settle him in. First order of business was getting him new, clean clothes. So we went over to now-bankrupt Sports Authority as they were having a large going-out-of-business sale and picked him up some new Nike shoes, black pants and a grey shirt. Then we went back home to so he could shower. We forgot to buy underwear so I gave him some barely-worn boxers—actually the underwear I had purchased in Newport News, Virginia 10 hours after finishing the Trans Am Bike Race last year. We laughed about that.

We then headed to Old Town but on this Wednesday night, no restaurant that was open was serving anything beyond appetizers. We ended up picking up a frozen pizza from King Soopers to eat at home.

The next couple days I showed him around Fort Collins. We watched the Cleveland Cavaliers trounce the Golden Gate Warriors in Game Six of the NBA finals at the Trail Head while playing pool with… Adam Kazilsky, a new Fort Collins resident who was the 16th place finisher of the Trans Am Bike Race last year. He had contacted me on Facebook when he learned that Michael was at my place, and this was the first time I got to meet him. Small world.

I dropped Michael off at the Denver International Airport on Saturday morning, making him the last 2016 Trans Am Bike Race participant I’d see in person. But it was not the last I’d hear of.

At Tuesday Night Track, my friend Greg Smith told me his daugher Jill Stetter was riding in the race! “I kept telling her about how cool your race was last year,” he said, “so much that she wanted to do it.” I had met her over half a year ago and it was great to know that I had inspired someone to give the adventure ago this year. So cool.

Here’s how the race ended for the racers mentioned above.

Steffen was leading the race all the way from when I saw him to the last night in Virginia. However, to maintain that lead during the last few days, he biked 40 hours straight, slept for only 5 hours, then biked another 50 hours straight—before snoozing for 2.5 hours for the final day push. But heartbreakingly, he woke up disoriented and biked a couple hours in the wrong (backwards) direction! He only fully realized his mistake when he encountered Lael Wilcox in the night who, in contrast, seemed rested and alert and was “crushing” the hills. Ultimately, Lael came into the finish two hours before Steffen, becoming the first woman to win a transcontinental bicycle race of this type.

Sarah would ultimately finish in sixth place—a rather good showing in her first attempt of a cross-country race. Word had it that she did get Shermer’s Neck and even resorted to fashioning some sort of neck brace with her sleeping pad.

Michael got back to Germany but only after his plane from Denver had to make an emergency landing in South Dakota. He plans on racing the Trans Am Bike Race again next year. Hopefully, third time will be the charm (he crashed out last year and succumbed to knee issues this year).

Jill finished the bike race in 30 days right on the Fourth of July and got to see fireworks on her finishing night. That has to be one of the coolest ways to finish this race.

As I write this (on July 8, 2016) there are still about 10 riders on the course. Good luck to them and congratulations to those who have already finished.