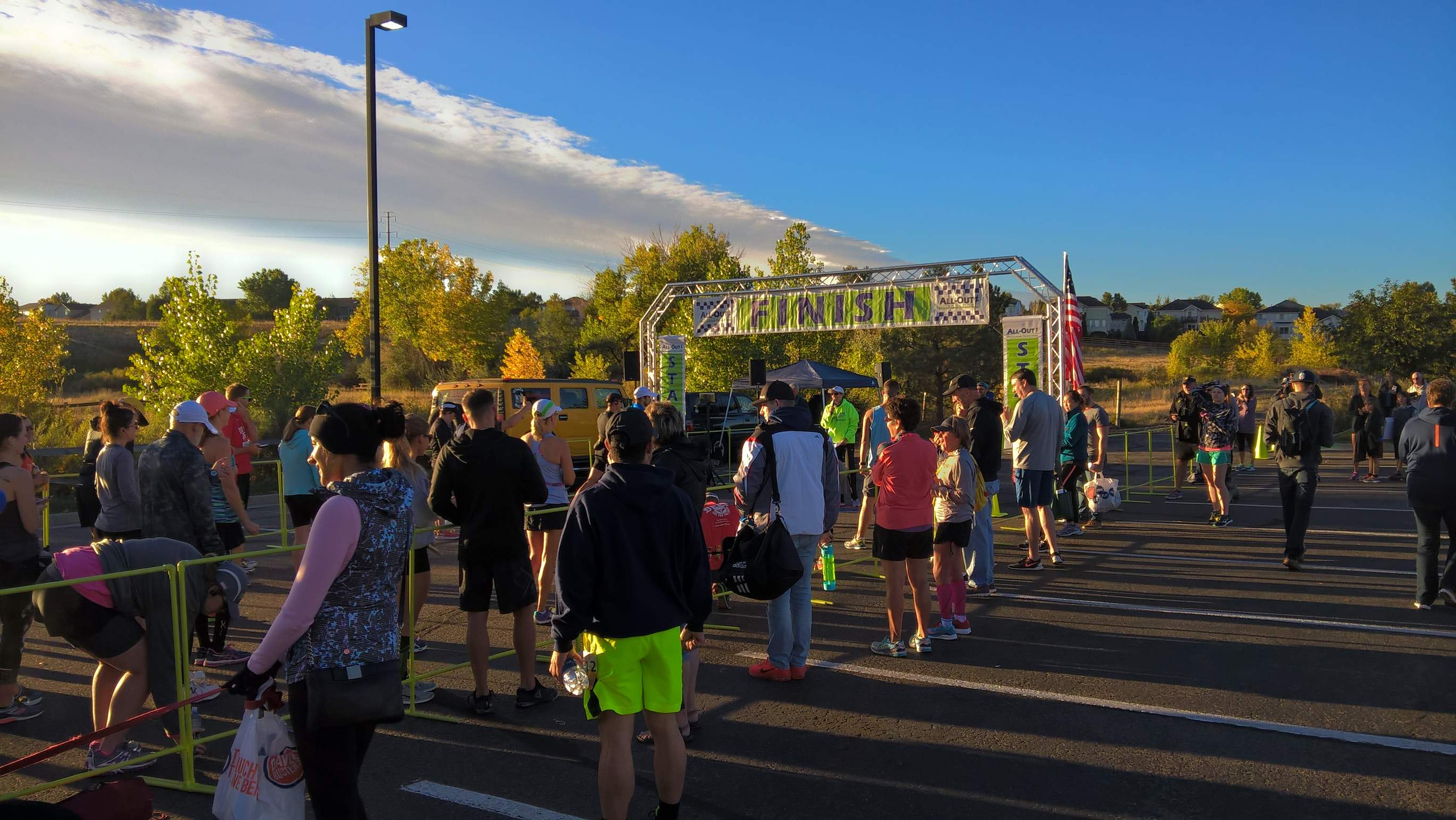 The All-Out Fallfest Half Marathon was my third half-marathon with Colorado Team Beef, and since my performance in the first two 13.1-milers were rather meh I was really hoping I could better those results in this race.

But the night before when looking at the rolling elevation of the course profile, I instantly knew that this was going to be a much slower course than the other two half marathons that had heaps of net downhill. When I got to the race start in Westminster, Colorado and watched the full marathon participants take off on a narrow, gravel path, I realized that not only were the hills going to slow my pace, but possibly the trail itself. (I run more efficiently on hard pavement.)

On the other hand, this race was at “only” 5300-5600 feet in elevation instead of 8000-10000. So I would be able to breathe easier. Lately I’ve been feeling pretty fit. Lastly, a quick look-around revealed that there were not much more than 100 people running this distance. That virtually no one wanted to be the first ones to toe the start line indicated to me that maybe in this race, I could actually be a contender.

The race started promptly at 8:00 a.m. At the first half-mile I was in third place before settling into sixth by Mile 2. One more guy—a fellow Team Beefer—passed me at Mile 3. By this point I had already resolved that I was not going to care about my final time and only focus on running a steady, efficient race while not relinquishing a top 10 finish. I thus completely stopped looking at my Microsoft Band 2, thereby ignoring any of the numerous real-time metrics it could provide.

At Mile 4 the then third-place woman caught and passed me. She (Nicole) asked if I ran the Rocky Mountain Half Marathon because I looked like a guy she was running behind in that race at a similar pace. I replied negatively and she continued on ahead. I really wanted to stay with her but she was just too fast and I was not going to risk blowing up. She steadily pulled away by at least a few seconds each mile. And then the course started to go up.

My pace was slowing but I was intent on staying within myself and pacing strictly off of perceived effort—namely, breathing. I would only go as fast as I could go while inhaling and exhaling every three steps—at least until the final couple miles where I would try to pick up the effort where I’d have to breathe every two steps. Anyhow, running based on perceived effort meant that on a long Mile 7-8 uphill, the fourth-place woman caught me. But not for long.

The course transitioned to concrete sidewalk for the next couple miles and I could see the summit. Then I saw my neighbor—an avid female marathoner in her 60s—running the marathon course in the other direction. “Go Joanne!” I yelled as we crossed paths. I think that actually gave me more energy and I passed the fourth-place woman as I accelerated downhill.

In the previous two half-marathons the Mile 8 mark is when my leg muscles were really beginning to hurt, but this time my body was up for the challenge. In the last five miles I not only gapped her by a couple minutes, but I passed one of the leading women who had faltered in these final miles. I could still see (barely) the long ponytail of Nicole—who was now the second-place woman—wagging in the distance, and although making a run at her was not a possibility, keeping my place seemed like a real possibility if I could maintain pace.

I’d do just that. With seventh place overall in the bag the only question in my mind before commencing a final 200-meter sprint was what was my final time going to be? I figured it could be anything between 1:36:xx and 1:44:xx, but it was going to be a surprise.

The final answer would come soon enough as I crossed the finish line with the race clock displaying my result: 1:38:51. I was pleased. While nearly nine minutes off my all-time personal best for the distance, this was by no means a fast course conducive to personal records and yet it was my best result all year.

I also got a nice age group award. Fun race!