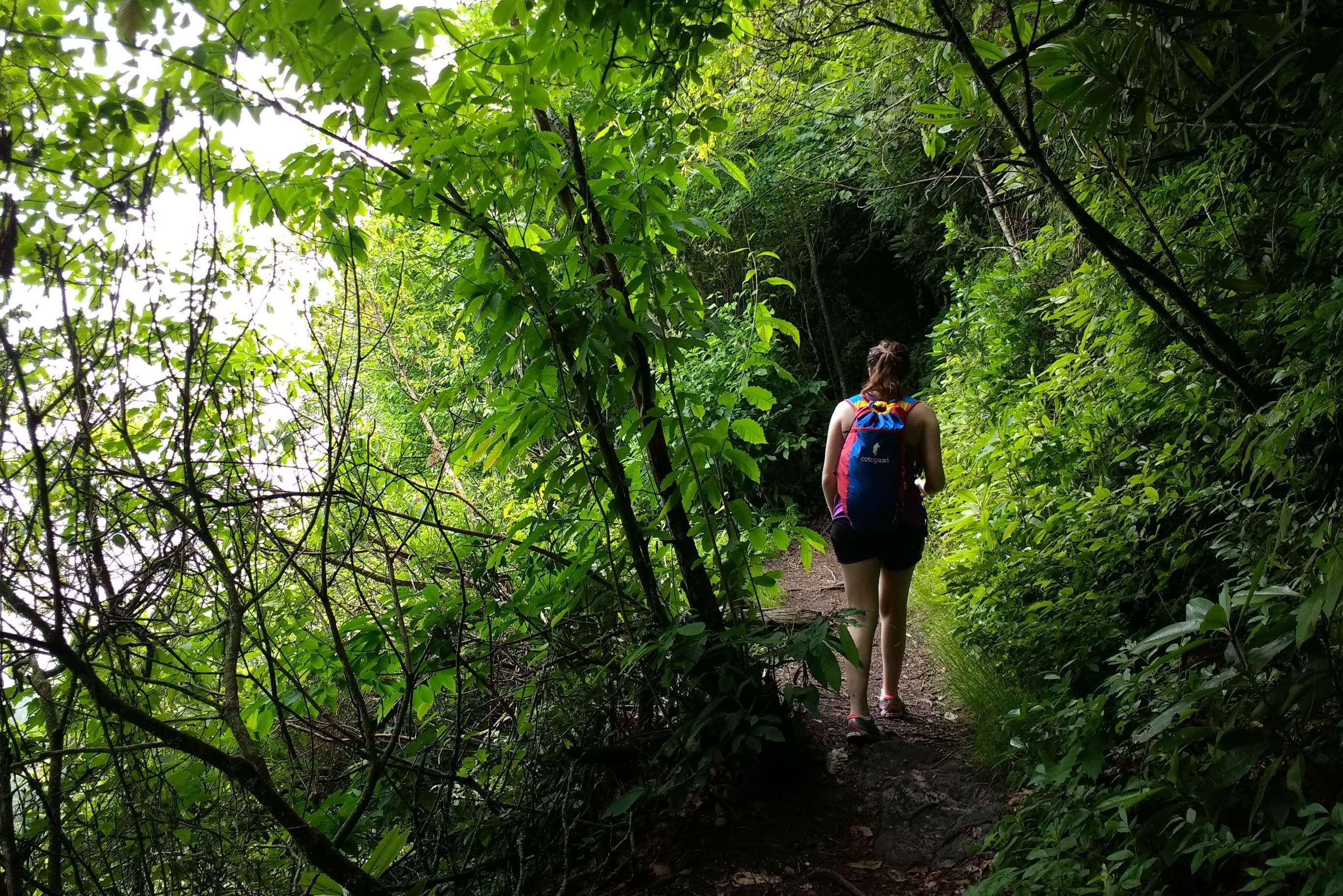 We had a good plan, I thought. We learned about Albert Mountain from laminated sheets of paper inside a store in Asheville called the Frugal Backpacker. The information—printed from AshevilleTrails.com—described an out-and-back, four-mile hike of moderate difficulty near the North Carolina-Georgia border that would give us our first encounter with the Appalachian Trail. Ambitiously, not only would we hike in the late evening, but camp on Albert Mountain overnight using a green Chillax double hammock my brother and sister-in-law gave me for the holidays.

We even checked the weather. “Looks like it should be dry,” I thought.

Imagine our surprise, then, when we saw water coming down the sky in all directions as if sprayed from a few dozen oscillating garden sprinklers gone awry. This happened while we were eating dinner inside a pizzeria only about 20 miles from the trailhead. We checked the weather app on our phones for the current conditions, and they insisted that it was merely “partly cloudy.” So much for being assisted by technology.

So, we decided to stay in a hotel overnight and watch The Martian instead. The hike would have to wait until the morning.

It turns all that was probably was for the best, as we likely got a much better night’s sleep on a real bed than we otherwise would have in the hammock. Plus, Matt Damon’s extra-terrestrial adventure got us in the mood for our own little odyssey as well.

First there was the approach to the trailhead by car. When pavement gave way to dirt, there were still over six miles of off-roading to get to the parking lot referenced by the AshevilleTrails.com page. Fortunately, there were no terribly gnarly sections and the Hemi-powered, rear-wheel-drive Dodge Charger I was driving had no problems negotiating the terrain despite being anything but a Jeep. It took about 45 minutes to ascend this section.

When we got to the trailhead, there was only one other car parked. But we would not be alone for long. We encountered other hikers as soon as a half mile into our trek.

This was at the Albert Mountain Lookout Tower, which was officially on the Appalachian Trail. Two guys were resting down below while Maureen and I climbed the steps of the tower. The views were fantastic, even a bit surreal as there was a thick blanket of fog hundreds of feet below us but blue sky above. It was like we were standing above a cloud that had enveloped the valley below.

After we came down, the hikers inquired about the drive up to the trailhead. Turns out one of them was having a knee problem, so he was going to wait for his buddy to go on ahead to reach their car and come back to fetch him at the trailhead Maureen and I parked at.

Once we got going again, it was apparent that the single-track was getting increasingly more difficult in terms of footing and steepness. Slick boulders constituted much of the path. A quarter-mile later, we encountered another hiker who was pausing to catch his breath. After chatting for a little, the guy said, “There’s a woman and a dog down there. Could you give her some encouragement when you see her and tell her that Stanley [the guy’s name] will be at the lookout tower with water.”

Sure enough, after descending a very steep section made up of wooden steps, we encountered the woman and her dog Teddy. They had camped overnight and the lady confirmed that it was pouring the night before. She had some ice in her bottle, but otherwise was completely out of water so we gave her and Teddy some of ours. At least they were well-stocked with food in the 50+ pounds of gear she was carrying.

When we parted, I realized that the ice in her bottle indicated that the temperatures must have gotten below freezing the night before. Good thing we hadn’t camped overnight.

After that encounter, the trail became considerably more mellow along a ledge that featured a couple of openings where you could see other 5,000-foot peaks in the distance. Soon we got to our destination, or turnaround point of the hike: Mooney Gap. But before we went back, we decided to rest.

The hammock was very easy to set up: just hook two suspension ropes—one for each hammock end—to the trees, then sit into the hammock, roll over, and relax. We rested here for a good 30-45 minutes. It was a peaceful area to do so, except for bugs nipping at the ankles.

We got up a little bit after a group of other AT hikers passed the area. Time to return to the car.

On the way back, we passed by dripping streams of water along rock sides, colorful wild mushrooms, vermin and even a snake. Fortunately, the latter was of the small, innocuous looking type.

Below are photos of some of these items. It was a good hike, even if it didn’t go exactly as originally planned.