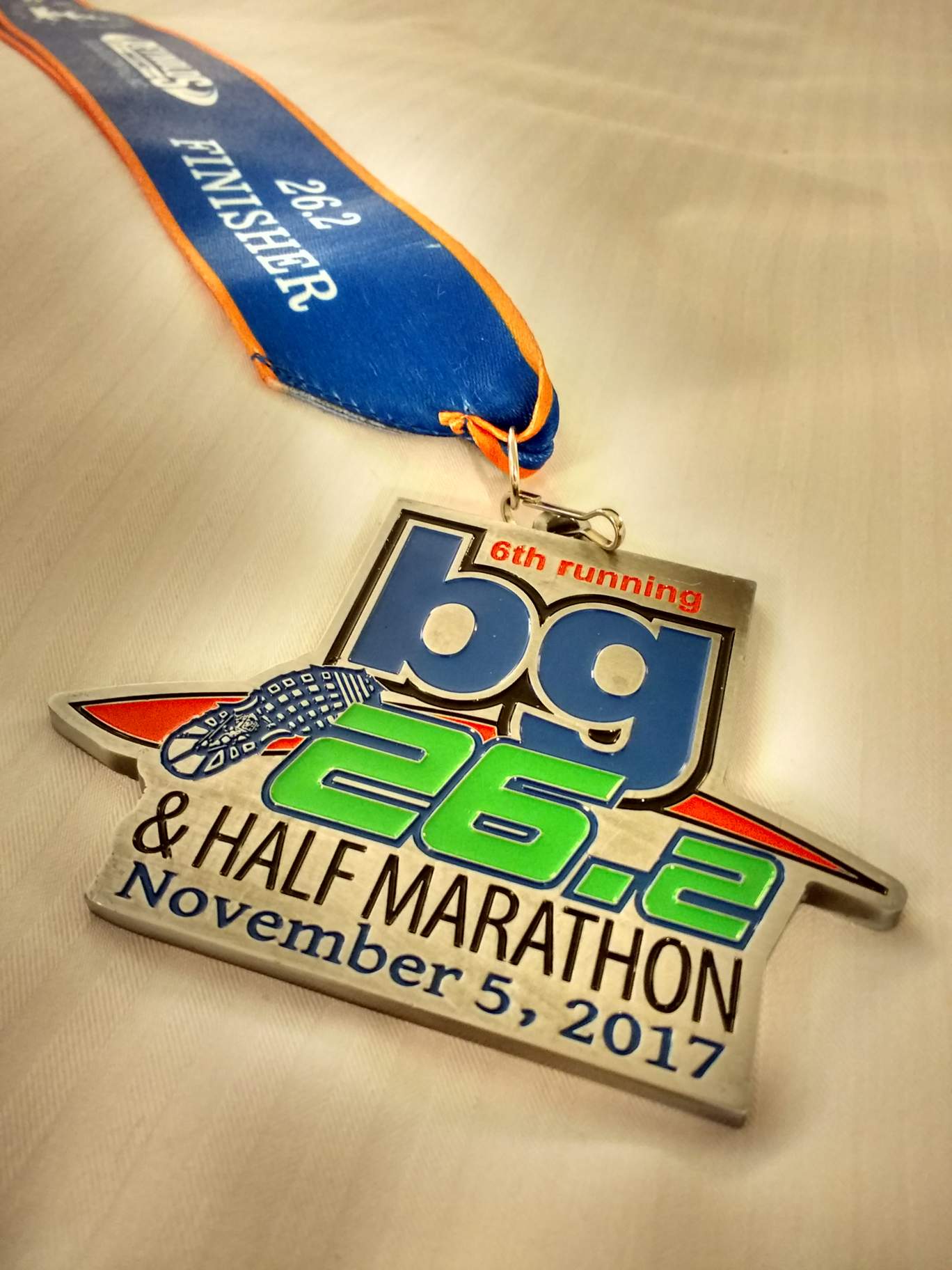 I certainly had my doubts about my fitness for this marathon. On one hand, before going to Portugal and Spain eight weeks ago, I felt very fit due to all the cycling I did (including the Colorado Triple Crown, or three very hilly 200-mile bike rides at altitude) and consistent run training. Indeed, only a week before crossing over the Atlantic Ocean, I ran my fastest 10-kilometer race in ten years. Also, every day on the Iberian Peninsula I was walking a lot, including three weeks on the Camino de Santiago in which I averaged 30 miles per day. All this mileage—607 miles on the Camino alone—had at the very least hardened my feet to the point where I knew that getting blisters during the BG 26.2 footrace was quite unlikely

On the other hand, I had done virtually no running until returning to the States. I couldn’t help but feel that walking slow and far only made me good at going far and slow (emphasis on the slow part). When I was back in Fort Collins and tried jogging for the first time, the whole running motions felt foreign to me. I would feel like I was going fast but then look down at my watch and see that I was running only nine-minute miles. For the rest of my pre-marathon training runs I even resorted to running with a metronome to help my body remember how it felt like to trot at 180 steps per minute. Eventually I was feeling “not bad,”—but had only worked my way up to a long run of six miles. The marathon, of course, was 20 more. Heh.

“Maybe you’ll surprise yourself,” suggested my friend Adam. After all, I felt like I met or exceeded my expectations in each of the last four marathons during the last thirteen months, finishing all of them between 3:26-3:32 on a variety of courses ranging from downhill but at altitude, to hilly or even super hilly, to flattish or rolling in warmish and humid weather.

By race day of the BG 26.2 in Bowling Green, Kentucky, I put on a brave face and decided to try to run this marathon at only, say, 5% reduced effort compared to those previous ones. So when Maureen—who not only accompanied me down to Bowling Green from St. Louis but also ran the 6000-meter race option—asked me how long it would take me to finish, I replied “3:35 best case and 4:00 worst case.”

I toed the start line with the best of the racers, and for the first half-mile was running alone in second place while feeling that my breathing was well under control. Unfortunately, another half-mile later it all went downhill. My performance, that is.

In contrast, the course went steeply UP as we rounded the University of Kentucky. Considering the steepness of some of these knolls I was happy with my splits after several miles, but I could tell I would have to ratchet back the effort if I was to make it the whole 26.2 miles. The marathon course was two loops of the half-marathon course, so I would have to run up these hills again. My pace then slowed to above eight minutes per mile after only four or five miles.

That is a slower pace than I was used to in the last marathons, but when I completed the first 13.1-mile lap my time, 1:47:00 had elapsed. Not great, I knew, but far from catastrophic. I had 2:13:00 to finish the second half, so even if I had to run it at an average pace of two more minutes per mile, sub-four hours was in the cards.

But the wheels started to come off at Mile 17.

It certainly wasn’t due to not drinking enough. I grabbed a cup (or two) of water at every aid station, and sometimes grabbed cups of Gatorade too. It was kind of humid and warm (maybe 70F) so I resorted to dumping some of the water on the back of my neck, as I did in Grandma’s Marathon in June.

I also was eating Swedish Fish candy that were being handed out at some aid stations for energy, and consumed a gel at some point as well.

By Mile 20 I was running around a 12-minute/mile pace and saw on my watch that I still had a little over an hour to run the final 10k to run sub-four hours. If I could run at 10-minute/mile pace, it was doable. So I tried picking up the pace for 30 seconds, but then my left calf started to cramp. OK, I thought, I’m going to have to back off.

That thought was underscored when, within another mile, my vision was getting a little blurred. Although it was a bit concerning—not being medically trained at all, I was wondering if I should be more concerned, like was this the sign of something serious like a stroke?—I ultimately resolved that I was going to keep on running the best I could, even though that meant 12-13 minute miles.

A couple miles later, I was moaning every step. My strides were choppy and my calves and hamstrings felt like they were going to cramp if I went any faster. At Mile 24, I drank a few ounces of pickle juice that was available at an aid station. While it tasted good, it did not seem to help the cramping issue.

At this point I could hear music playing—one of the songs was Europe’s “Final Countdown, which is one of Maureen’s favorites for races—which made me smile and also think of her. I thought back to all the times she’s come with me to races like this one, and I also knew she could understand how tough this course was due to running the 6000m race earlier in the day, which included all the tough hills of the marathon route.

With over a mile remaining, four hours came and went and all I could do was maintain pace. When the finish line was in sight I was too exhausted so that even though 4:13:00 was coming up on the time clock, I didn’t bother to sprint to squeak under the rounded minute as I normally would do.

Maureen found me and the first order of business was to sit down and take in some calories. I hobbled over to a bench and Maureen got me a burger, and we were soon joined by another man who seemed to feel even worse. After a few minutes, he was lying on the concrete trying to stretch out his legs but not very successfully—they were badly cramping.

After asking him if he was all right, the man responded negatively, saying that he never felt so bad even after a Half Ironman triathlon, so Maureen went to get some medics from the First Aid tent. They arrived a few minutes later. Meanwhile, I tried to offer the guy some words of support and encouragement.

We both had managed to finish on what was a tough day for both of us. Far from disappointed, I was happy to make it to the finish without having to resort to walking for more than 10-15 seconds total. It was another marathon state that got checked off, and I was now looking at it as the start of a new run training cycle.

Most of all, I did all I could do—even if that meant running 13-minute miles at the end. I didn’t throw in the towel and gave it my best effort, which is all I can ask of myself. There will be other races and my preparation will be better.

Other Notes About the Race

Considering the consistency of my race performances and fitness level before going to Spain, I will conclusively say that walking/hiking a marathon (or more) every day for three weeks is not good training for running a marathon. Despite having walked 10-14 hours per day in Spain, my legs simply had no endurance for this race and my final time was 41-46 minutes (or two minutes/mile) slower than my previous four marathons.

Maureen suggested that during the Camino de Santiago, my body composition changed from being a runner to a walker. I think she is right.

I have now run around 50 marathons with many different training regimens, and this is how I would rank them for marathon readiness: