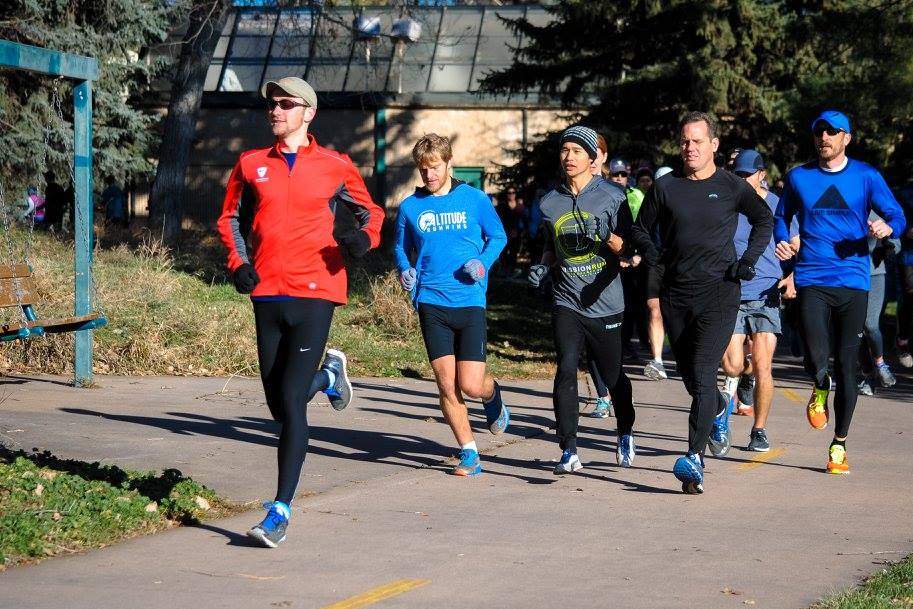 “Hi Adam,” I wrote my bud in California. “When are you flying into Colorado? Would you be interested in doing a “prediction run” (5k) on Saturday in Fort Collins? Entry fee is merely a canned food donation, and turkeys are awarded to the top 5. The winners are those that finish closest to their prediction!

That email was a few days before the day that the Fort Collins Running Club’s Turkey/Donut Predict 5k at Rolland Moore Park occurred. By race morning, I felt that 21:41 (6:59/mile) might actually be a tad optimistic, so I ended up writing down 21:49 when I registered.

Considering that I have only been running for a few weeks since returning from Spain—and it had only been 13 days since running a (slow) marathon—I think the race went as well as planned. The 150 or so runners in this pre-Thanksgiving Day race had a choice of two courses along the Spring Creek Trail: one that went out-and-back to Cottonwood Glen Park towards the southwest, and another that went out-and-back to past Center Street (I think) towards the east.

I made it to the halfway point feeling pretty speedy but not blisteringly fast, and was surprised to see that I had a gap on other folks who I knew who ran at my pace or faster in the months before I went to Spain and didn’t run at all.

On the return trip, a young man passed me, but I managed to pass him back on a downhill section a couple minutes later. Meanwhile, a young lady named Teal was breathing down my neck until she went by me with about a half-mile to go.

With about 200 meters I felt maxed out, with my lungs and breathing muscles being the main limiting factor. By that point I could see the finish line so I tried to sprint for it, but couldn’t quite catch up to Teal. Here is a photo of me behind her on a bridge that was about 50 meters from the finish line:

You can see that my eyes were closed. I usually do that when I am kind of hurting; I have no idea why. I’ve even consciously tried to open my eyes wide when I find myself doing that (“don’t flinch!”), but my eyes seem to want to be closed when I am exerting myself at the limit.

In any case, I felt like I beat my predicted time by a bit. In fact, I beat my official prediction by nine seconds, as I finished in 21:40.

Darn, I should have put down my original prediction to Adam of 21:41, and then I would have been off by only a second and would have won a turkey!

Oh well. It’s nice to see that I was (very slightly) faster than what I thought I was. I hope to keep my training up and that I’ll be back to running sub-21s within a few months or so.

Final time: 21:40 (6:58/mile)
Official results
No splits as no one was allowed to wear a timing device. This was a prediction race, after all.