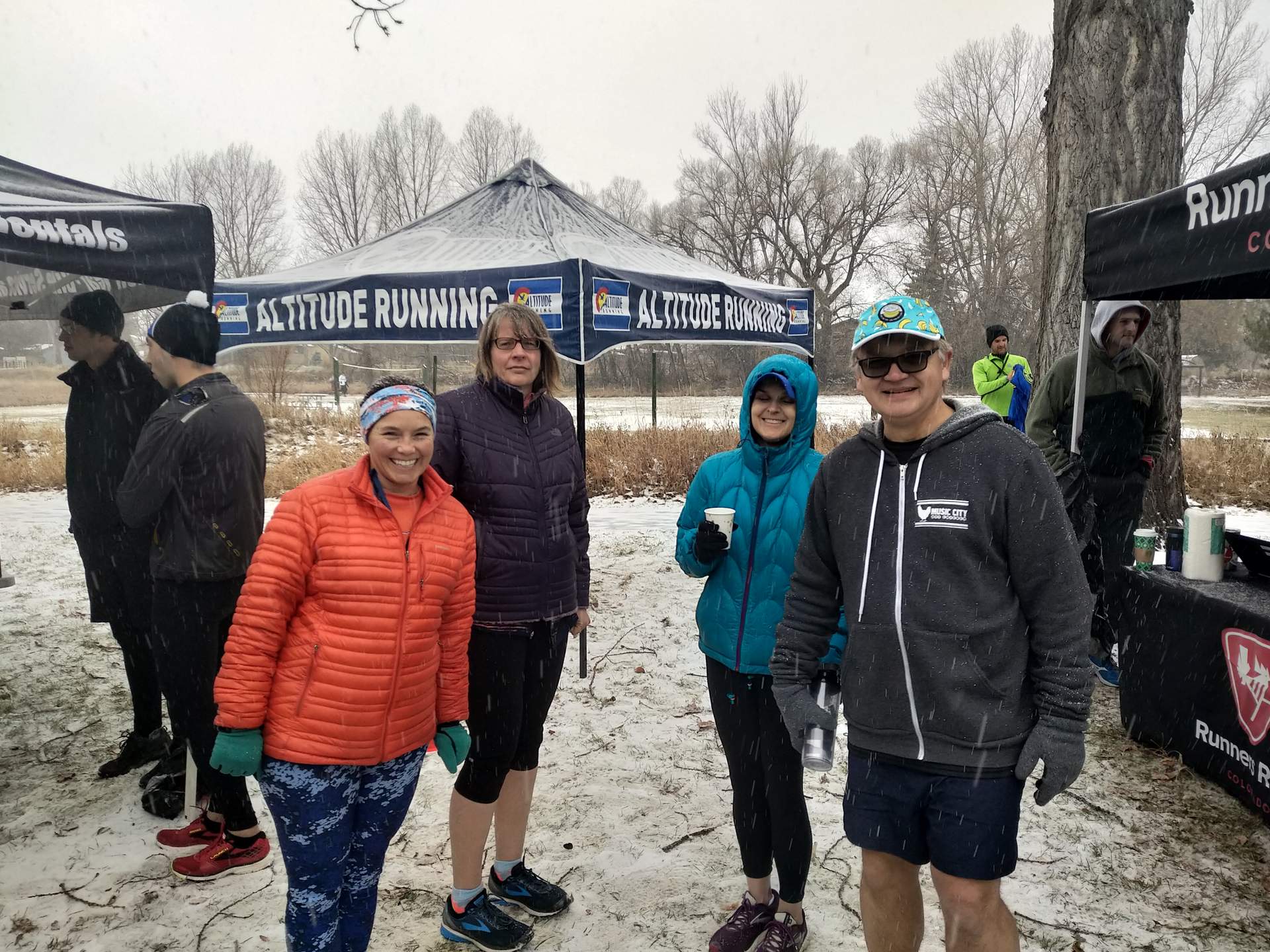 A bunch of us Fort Collins Running Club members had met at Odell’s Brewery the evening before the second annual Turkey Donut Predict 5k, and inevitably, discussion had turned towards the race.

“I think the biggest question,” I said, “is not what time I will predict, but what should I wear?” Smartphones came out as several of us started checking our favored weather apps… again.

Just a couple of days ago, the weather forecasters had been calling for 1-3 inches of snow and 15F temperatures on race morning. But on the eve of the race, the forecast had changed to a bit of freezing rain at 6 a.m., with snow flurries only beginning around 10 a.m. As the race was going to start at 8:30 a.m., it seemed like weather conditions would be fine. Moreover, the virtual mercury was supposed to read 28 degrees Fahrenheit, or warm enough to wear shorts, if barely.

So I showed up at the race wearing shorts, a T-shirt and black sleeves, which would be my race outfit after I stripped off the pre-race jacket and ski pants. Since the temperatures were as predicted, the clothing choice seemed appropriate.

On the other hand, freezing rain and snow was steadily coming down and accumulating on the trail. Not good.

“Probably not the best shoe choice,” said Melody, who was directing this race and noticed my Puma H-Streets, which are basically racing flats with no tread or grooves in the sole. Probably wasn’t.

Already, I was regretting writing down 21:40—or the time I ran last year in this race—for my predicted time at the time of registration, despite it being 28 seconds more than the 21:12 I had planned on only an hour earlier. Probably should have added a whole minute more considering the slip-sliding conditions.

Regardless, I wanted to give this run a good effort, so I lined up in the second row upon race start. Once Melody finished the countdown, I chose the leftward option on the Spring Creek Trail as I had done last year. Going left (west) meant going slightly uphill on the way out and slightly downhill on the way back, or opposite (and in my view, preferable) to that going right (east).

It seemed like the speedsters had the same strategy, as seven of them went that direction and opened up a pretty significant gap from the get go. I wanted to take off a little less like a jackrabbit than I did in the Tortoise & Hare race two weeks ago, and it seems like Dan Clark and his protégé (probably around 12 years old) had the same idea, as Dan said to the kid as they ran together, “pace yourself at the start.”

The pair actually caught and passed me after one mile, and had a good 20 yard lead by the 1.55-mile turnaround. Meanwhile, I was feeling like I was running better than I expected on this trail which had an inch of snow on it, even if its slipperiness was slowing me down at the bridges and the turns. At the turnaround cone I essentially had to come to a complete stop to safely navigate the U-turn.

With about three-quarters of a mile to go I caught Dan and the boy. “Where’s your 40-lb. vest?” Dan joked as I passed. “Not today,” I replied under my breath.

The last quarter-mile I heard footsteps behind me. Instead of waiting for them to pass, though, I made a concerted effort to pick up the pace slightly, and was going fully anaerobic by the final turn 100 meters from the finish line. As I crossed it, I was given a Popsicle stick that with the number eight. Eighth place overall out of about 150… not bad.

Turns out my final time was 22:xx. (The official results were never published, so the time estimate is from asking a guy who finished 10-20 seconds ahead of me what the timing people had told him what was his time. He said he finished in 22:10.)

Considering the conditions, I was happy with the effort. Enough to eat a couple of donuts after the race.