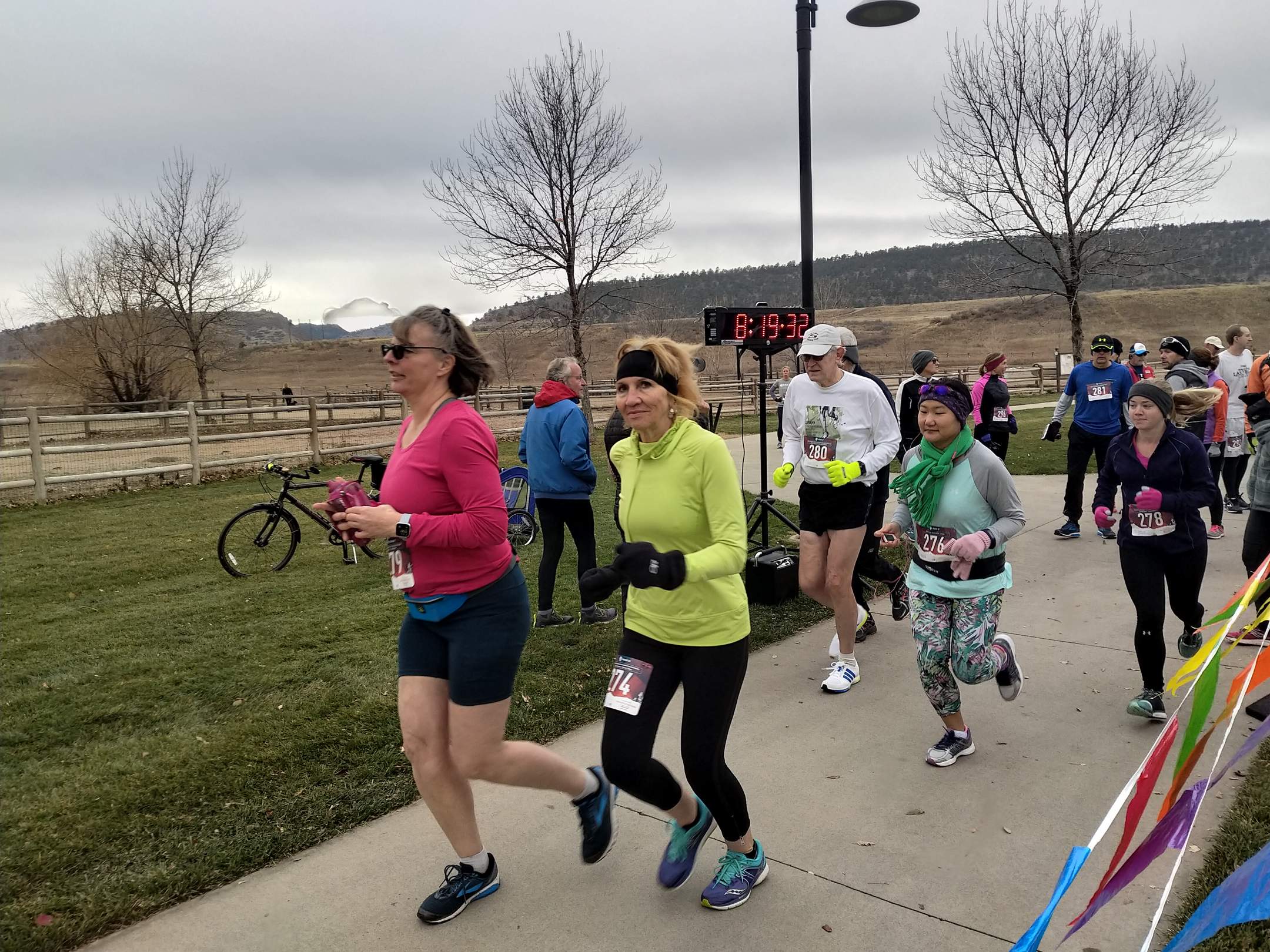 “What time do you think you’ll be running?” my friend Jen asked a few minutes before we were to toe the start line together at 8:28:30 A.M., or the wave the Tortoise & Hare software that I wrote for the Fort Collins Running Club had us start at.

“Twenty-one [minutes] thirty [seconds],” I replied. Then, after quickly thinking about how she’s been demonstrating superior fitness at Tuesday Night Track, I added, “You’ll probably be faster than me.” I then warned her about my penchant to start fast but then fade in the second half, so she “shouldn’t panic” if I was ahead of her in the first mile.

That turned out to be remarkably accurate prognostication—both on the time and how the race played out.

The moment our start time rolled around, I was off the line like a kangaroo, and according to Jen after race, quickly got a good 20 yards on her. After two minutes, she even yelled out, “Felix, [you’re going] 5:59 [per mile pace]!” I laughed and since I was not out of breath yet I kept it up… at least for a couple more minutes.

At exactly four minutes into the race, Jen passed with conviction. I stayed about 15 yards behind for another quarter mile, resulting in a decent first mile split of 6:27.

Unfortunately, then the route turned left onto gravel, and my pace slowed due to the softer terrain and having to round the corner. Another mile in, my friend Thomas—who started in the same wave—whizzed by as the course started to go uphill and I developed a side stitch. This was the second Tortoise & Hare race in a row where the right side of the ribs suffered pain, which is probably due to a lack of conditioning. Whatever the reason, it forced me to slow. I glanced at the Garmin on the wrist and shook my head: it was reading an instantaneous pace of 8:10/mile. Not. Good.

The route then did a U-turn, which normally spells further trouble for rhythm. But in this case, it also meant the course went downward. The side stitch subsided and I showed some fight by picking up the pace and passing a few runners. The last eighth of a mile I even managed to accelerate from 6:40 to 5:00/mile—a good closing effort, although not as impressive as Jen’s, who averaged 5:00/mile during that same stretch (according to her Strava data) and finished a good 50 or so seconds ahead.

She later said after the race that she once ran the 100-meter dash in just over 13 seconds. Definitely has some speed.

We also later learned that we have a friend in common: Josh Levin, one of the elite athletes on American Ninja Warrior. Both Jen and her husband Justin have applied in the past to get on the show. You can add her to the list of badass women I know.

Regarding my final time, it was 21:25, although the official results say 21:20. Heh, I’ll take it. I was pretty content with the time considering that last November I ran 21:40, and I am 8 pounds heavier than then (I’ve put on significant muscle the last few months due to intense weight training).

But I should be able to do better especially if I do more cardio. And maybe run with better pacing. My very best times have been when I start fast and hang on, but that only works when I’m in optimal running shape. I think the next time I’ll try to start slower and shoot for more even splits. My mile splits this race (6:27, 7:11, 7:14) left a lot to be desired.

I remember when my buddy Nick’s son Alistair was just a few months old—and that was about a dozen years ago. Nick is a world-class ultra-runner, so it should surprise no one that his son can run well too. In fact, Alistair’s time at this year’s hilly Horsetooth Half Marathon of 1h41m was just two minutes more than my time in 2017, prompting me to tell Nick, “in a year or two, I think Alistair’s going to be faster than I.”

Nick, at the time, replied that he thinks I still would have the edge for the shorter distances. But my prediction was fulfilled in less time than I thought!

After the race, Alistair came over to tell me that he finished in under 21 minutes. In fact, he beat me by 26 seconds. “I want to run it in 19 minutes next year,” he told me.

Me, I’m just hoping to get back under 21 minutes…

Felix, you are one of the sweetest & very best motivational friends a person can have. Thank you! ↩Reply