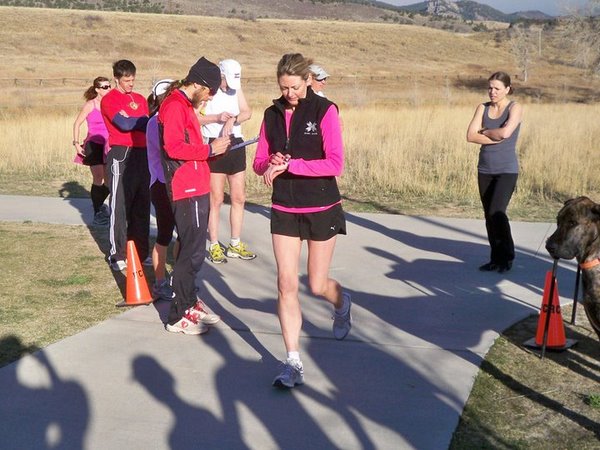 “Time for the SHOWDOWN!” This was it, the final race of the Tortoise and Hare Series, the one that would decide who would gain ultimate taunting rights in the little battle between me and my trash-talking girlfriend. In the last run, I had pulled within a draw on the series scoreboard. So we decided whoever crossed the finish line first in today’s competition would be proclaimed victor.

I was feeling pretty confident due to my newfound fitness level, the relatively short distance and the spectacular weather. I even biked over to the start in order to adequately warm up my legs.

There were a few wildcards, however. First, Leah seems to have gotten quicker over the course of the season and she would get something like an eight-minute head start as dictated by race director Nick and his all-knowing computer. Second, the course was not optimal for my abilities because half of it was off-pavement, had numerous turns and looped around so much that it was ripe for someone with my orienteering abilities to get lost.

Leah’s head start was big enough that she had already started the larger, second loop before I had even started the first. I’d have my work cut out for me.

Fortunately, I was feeling great today. Keeping a high cadence I was running about 6:00/mile flat on the early pavement and started to reel in some of the hares about midway through the run. A little later, I ran by Katie and her Great Dane named Griffin, and since they started only about ten seconds after Leah I figured Leah must have been pretty close.

With about half-a-mile remaining, I had done it: Leah was caught! I paused just long enough to give her a sideways hug. “Darn it!” she said, knowing that her battle was lost. Now that all remained was crossing the finish line and seeing what my final time would be.

It was 20:04, which because the Garmin measured 3.17 miles turned out to be one of my better 5Ks (6:20/mile). Turns out the sideways hug cost me a sub-20 minute finish, that and all the gravel and not taking the best lines through the numerous curves. (“Felix doesn’t believe in taking the tangents,” said another runner who started after me. This is not exactly true; I was just too focused on not missing a turn!)

But no matter; what was most important was that I could proclaim “VICTORY!” to Leah’s face. Now I just have to decide what will be the “prize” other than the ultimate trash-talking rights.