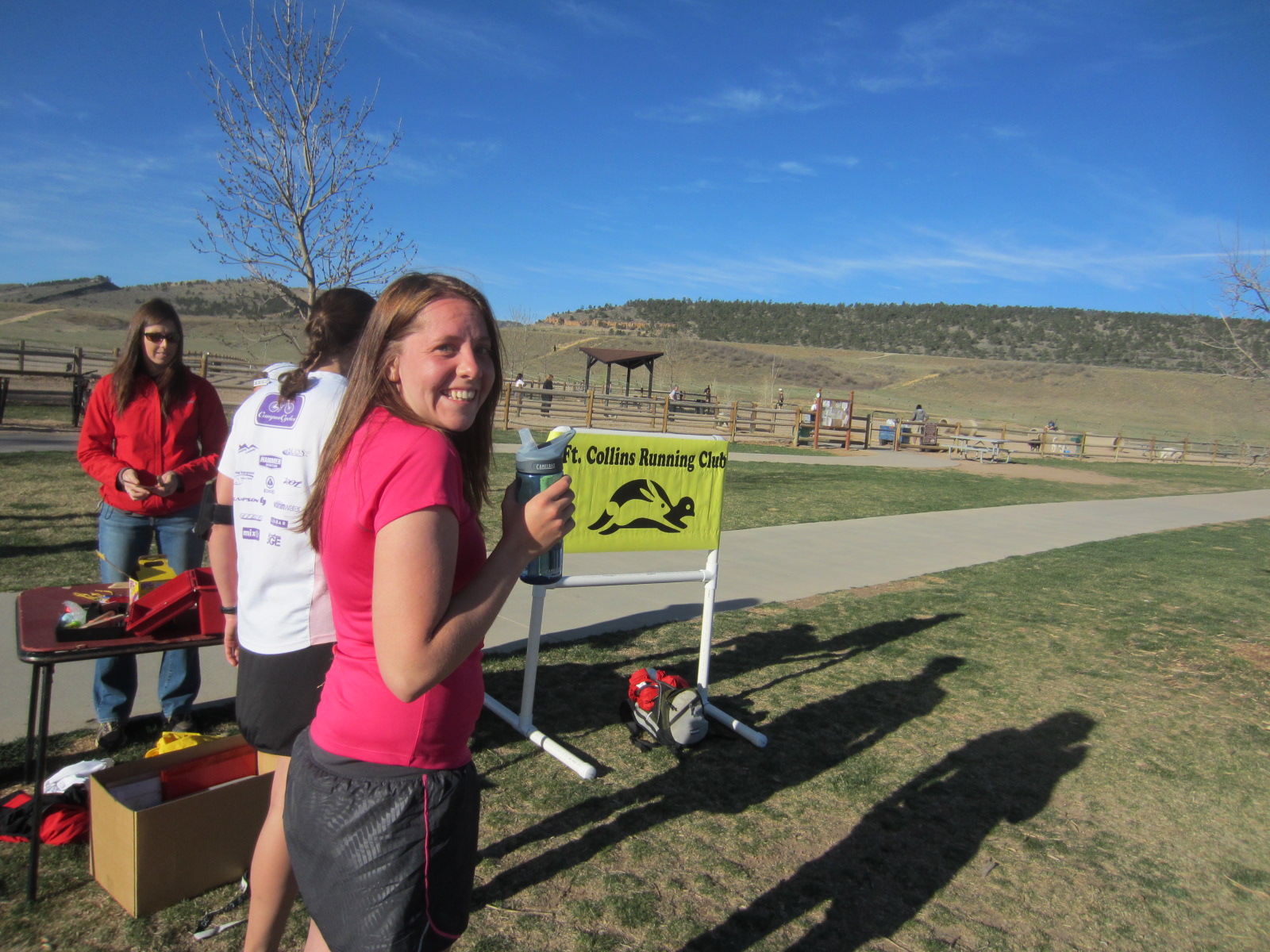 “You rode your bike to the race this morning?” Jance asked while I was about to sign in for the Spring Canyon Park 5k. “You still live in Hearthfire, right? I live near there, and it took me thirty minutes to drive here!”

I might have well been inclined to drive here myself if it wasn’t for the missus. Kelly, you see, wanted to pedal here. It would augment a highly active past few days for her, which included two 1.5-hour Boot Camp sessions, three bicycle rides, and even a few miles of inline skating.

Why such a flurry of exercise for this lady, whom just a couple months ago I’d basically had to drag out of her car while she clung to her car seat yelling “no, no!” in order to get her to run a Tortoise & Hare race? “I want to become a babe by summer,” she explained.

We did ride the 12+ miles over at a pretty relaxed pace in order to keep our legs fresh for the 5K, the final race in this season’s T&H series. In this handicapped race, Kelly was hoping to beat her predicted time by enough so as to land a top five spot in the final series standings, whereas I was hoping to put in a 5k time in the low 20s and demonstrate that my running form is returning. I had been trotting the roads more frequently in March; the weather was summer-like, necessitating only a light singlet and shorts; and my legs were warmed up from the ride over. So a good run for me was in order?

It also turned out that biking over kind of established a certain non-optimal cadence that my legs couldn’t break out of. I’ve also had an unusual amount of allergies the last few weeks (the trees excitedly bursting with petals in response to Colorado’s early summer may be to blame for that), and my lungs felt “high pressure” after little hill #1, which came after only a quarter mile.

I quickly got a side stitch and then a shoulder pang and a stomach cramp. I know, excuses excuses. But all this conspired to make me finish in a pretty disheartening time.

How dismal? Try my slowest 5k ever. Although even I didn’t know it took over 22 minutes until after I exclaimed “that’s got to have been the first or second toughest 5k I’ve ever done” and then checked my watch.

At least I had enough energy to sprint in the final 200 meters and look reasonably speedy on film. That can practically be my motto: if you’re going to be slow during most of the course, at least look fast when everyone’s watching.

Kelly, on the other hand, was all smiles after I crossed the finish line. “I couldn’t believe,” she exclaimed, “that my popsicle stick said ‘1’ on it when I finished!”

And an exciting finish it was. Apparently, in a gutsy effort worthy of Prefontaine, Kelly was leading the race all the way to the end when, within the last two hundred meters, she heard another runner charging at her fast from behind. So despite dry heaving and being moments away from collapsing, she dug deep one last time to cross the finish mere seconds before the chaser.

“Tell Kelly ‘good job today,'” Nick later told me, “Man, she just about killed herself to cross the line before Melanie.”

The effort was well worth it, however. Not only did she get the blue ribbon for winning the race, but it garnered her enough points to finish fifth in the overall series standings and be awarded a $25 gift certificate to Runners Roost.

What makes it even more amazing that she ran a personal best time (on a hilly course too) was that she had worked out so much in the previous days that she was achy all over. “My armpits are so sore,” she told me at some point, “that I can’t even raise my arms.”

Clearly, then, she is well on her way towards becoming a babe by summer. Never mind that I already think she is one.

Congratulations, Kelly! I am impressed. Felix, you are such a great writer. Thanks for the story; I should check your blog more often! ↩ Reply