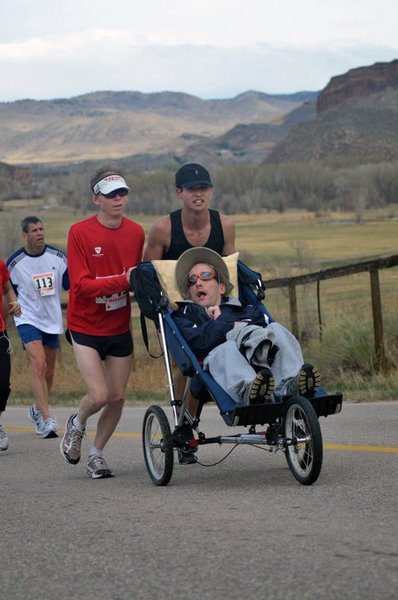 When I signed up months ago for this race I didn’t exactly imagine that my training would be as crappy as the manure in my garden. While initially I had visions of running down the finishing chute with the clock reading a few ticks under an hour-and-a-half, my two-or-three-times-a-week training runs probably weren’t going to cut the mustard. After all, the only other time I did this race I finished in 1:36, and my last half marathon (the spatula-flat Crossroads Half Marathon) was officially 1:30:00 on the dot. The Horsetooth Half Marathon, in contrast, had lumps in the road as high as the Space Shuttle.

So as the race approached I cared less about goal times and more about having fun and a people bonding experience. Not to mention an especially hard workout that would help prepare me for my A-race this season, the Colorado Marathon. So when Connie sent out a holler for volunteers for Athletes In Tandem, I jumped at the chance.

Athletes in Tandem is a local nonprofit organization founded by Dennis Vanderheiden that “actively participates in relationships with challenged athletes to enhance the quality of their lives by competing together in running, biking and swimming events.” Think Dick and Rick Hoyt, but with local folks with cerebral palsy. On this day, we were graced by the presence of AJ, James, Libby, Nick, and Zach.

My friend Dan and I were to race with Nick who, coincidentally, was about our age and also our weight. Essentially, we would push Nick in a stroller up and down the three Horsetooth Hills that Dan dubbed the Three Bears (Mama Bear, Papa Bear and Baby Bear), over Bingham Hill and onto the Poudre Trail, and finally, across the finish line outside of New Belgium Brewery. This was not a trivial task because even without the extra 140 pounds we were hauling, the hills—particularly Mama Bear (also known as Monster Hill, which is a 13% grade in various parts)—were steep enough to cramp a quad or bust a lung.

Fortunately, none of that ever happened to Dan, Nick and me, but I definitely felt like I was getting a supreme workout that Jack LaLanne would have been proud of the first few miles. From the vantage point of Nick, the race probably felt akin to a bona fide roller coaster.

Going downhill was not exactly as easy as paint-by-numbers either, lest the stroller go out of control like a runaway truck, mowing other runners down in the process. Fortunately, there was a handbrake.

Other good fortune included not having any tire blowouts. (“What is the contingency plan for flat tires?” I asked Dennis before the race. “There is none,” he smiled somewhat reassuringly.) I was actually quite concerned about this as in the prior week I seemed permanently jinxed by the Air God, having suffered four flats on three wheels on two bicycles.

After an all-out “yes this is the last hill” push over Bingham, Dan and I picked up the pace and basically hauled ass to the finish. We passed lots of folks in the last few miles, which was not always easy since the trail was narrow and many people wearing headphones were oblivious to our occasional shouts of “on your left.” (In hindsight, “stroller coming through” might have been more informative.) This was one of the few races where instead of fading in the last couple miles, I was actually quicker. By the time we were in the finishing chute the race clock read 1:53 and change, which was a bit less than the two hours we speculated it would take us with the stroller and all.

But again, the point of this wasn’t about time but putting a smile on Nick’s face and ours too. For all that, I think we succeeded. Dan later summed it up by saying, “I was reminded that running is typically a selfish activity unless you’re literally doing it for someone else. It was a great experience.”

It was indeed, in addition to a great workout.

Nice work Felix! When I helped push James last year at the HTH I came in just over 2:00:00. It's a solid workout for a great cause.

Well that is just the nicest thing! Yes I remember seeing the three of you on the course! And you did an amazing feat, considering I only had to haul by OWN butt up those hills and finished behind you! :)

What a fabulous cause. And I remember your rider having a huge smile on his face :)