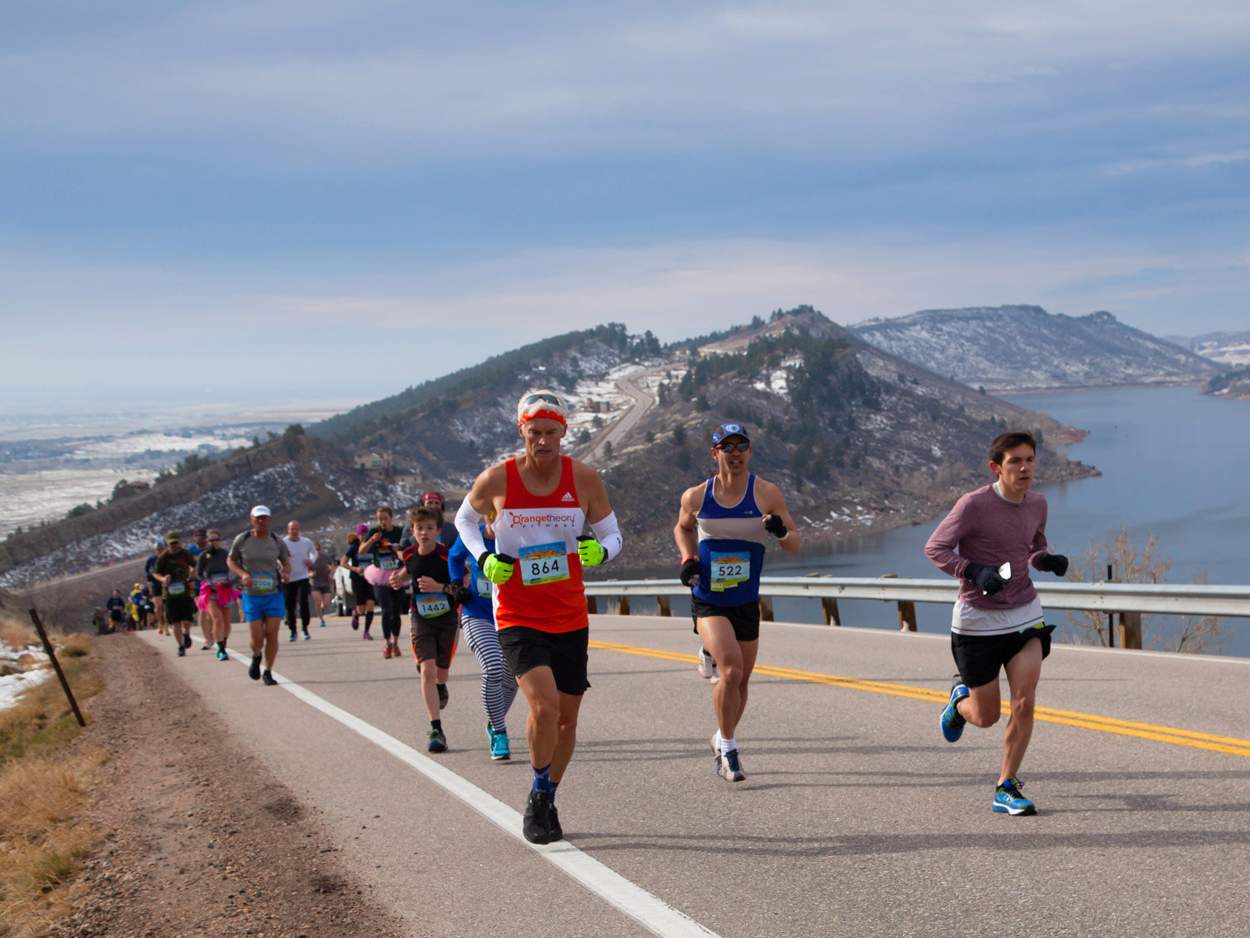 This would be the fifth time I had run the Horsetooth Half Marathon—Fort Collins’ iconic 13.1-mile race and one of the oldest half marathons in the world—in 12 years, and I am not getting any younger. My training also was sub-optimal, although I think I did a pretty good job running every 2-3 days in Europe in spite of encountering intersections and traffic in the amount of time you can say “I’m feeling a good rhythm now.” Yet I felt confident that this race would go better than the last time—2017—when my lungs exploded early and I was redlining for the last, oh, 12.5 miles.

“This time I’m going to take it much easier during the first two miles of uphills,” I told my 62-year-old polyglot friend, Matt. “I’ll make the time up on the downhills and during the last five miles,” I resolved.

In other words, the plan was to run a negative split. Which should be natural on a course like this, but is hard to attain when you go out too hard and encounter fatigue during the last few miles. In 2017, I was looking at the watch around Butterfly Woods (Mile 9) and was utterly dismayed it read only 7:45/mile despite being at my utter limit and the course was going slightly downhill by that point.

This year during the 10 days before the race I had some encouraging workouts. Two were doing hill repeats with Matt up Fort Collins’ steepest paved switchback—County Road 38 E—which happened to be Mile 0.5 of the race. Each workout we ran up the hill for a minute and walked back down for another minute, repeating eight times. Due to our differences in running ability, I wore a vest weighing 25 pounds the first time and 33 pounds the second time. The repeats were lung- and leg- straining, but good confidence boosters.

A third workout was with the Tuesday Night Track group in which we ran a total of four miles on the Poudre Trail, with two half-mile intervals at half-marathon race pace. I ran with a guy named Jim and was pleased to observe afterwards that “that was encouraging; 7:20/mile felt pretty easy!”

Per plan, I went up the first big hills at a comfortable pace. My friend Chris—who was holding a sign saying “1:40” because he was the official pacer for that time goal—even got a 15-20 second gap on me before the top of Monster Mountain. At least I was not in the red.

I quickly caught and passed the 1:40 group on the subsequent downhill. This resulted in my quickest mile split of the race: 6:48/mile. Maybe I could have and/or should have pushed slightly harder, but was running conservatively and was still in front of the 1:40-ers.

They caught me right at the top of the north dam hill. “Go Felix,” encouraged Chris, and right on cue, the pavement pointed downhill. It was steep enough that on a road bike, you can exceed 50 mph without trying too hard. I quickly got a gap and that would be the last time I’d be running alongside that pace group.

In fact, after the Mile 6.4 turn onto Bingham Hill, a quick glance over the right shoulder revealed they were a minute back. Now it was just a matter of keeping pace and staying ahead for good.

As it would turn out, I did! I was maintaining a 7:20/mile pace all the way to the end on the Poudre Trail, which felt comfortable except for blisters that developed behind the big toes on both feet. In years past I could wear any type of socks (even ones with holes in them) and be blister-free, but I haven’t been running as many miles this year. It seems, then, that wearing cotton socks was a mistake. For the next race over 10 miles, it would be a good idea to wear socks made of, say, Coolmax instead, which wick better and generate less friction.

Nevertheless, considering how good I was feeling the last few miles, I should have been able to push a tad harder. I think I got too content when I could tell that with five kilometers left, it looked like 1:38 was in the bag. The pre-race goal, after all, was anything under 1:40.

Final time was 1:38:19. Success! Pacing myself well at the beginning paid off after all.

Friends Who Did the Race

One of the nice things about doing a local race versus, say, marathon states is knowing a lot of people doing it too. These are some of the folks I knew who made the race several times more fun.

First, there were my friends Kristina and Emily, whom I had met at the Polar Plunge 5k. Kristina was running her first half marathon ever, and Emily didn’t train at all for this event. In fact, the last time she ran was a nine-miler in early February, with me! Yet somehow they both finished minutes under two hours. Really impressive.

Coming in a bit later was Matt. Last year he did the race despite not running in 40 years, and I was so proud of him for finishing. This year, he actually trained in the two months leading up to the race, and cut 15 minutes off last year’s time. That’s a big improvement. He’s now going to run a flatter half-marathon in New Mexico, and then later this year, his first marathon. The latter will especially be an interesting challenge.

My good friend Jennifer also finished despite doing only three training runs since December (two of them with me) since she has mainly been training for power-lifting. She was cramping the last few miles but crossed the finish line with a smile.

Rachel from Tuesday Night Track finished two seconds ahead of me as shown in the photo below. Makes sense since we usually seemed to run at the same pace during TNT! Still, it was amusing since I think she was ahead of me the whole way, yet I didn’t see her and I probably only got so close due to the final sprint.

In contrast, my friend Thomas caught and passed me twice during the race, but I managed to keep him in sight the rest of the way. He finished about 30 seconds ahead.

Speaking of speedy women, I have another friend named Jen whom I’ve done several races with and often run with or am even ahead of during the first mile or so. Then she invariably gets a gap. She has beat me in every race, usually averaging about 20 seconds/mile less. Accordingly, this time she finished in 1:33.

Finally, my buddy Nick’s 12-year-old son Alistair gets major kudos for an astounding run. Last year he ran the race in 1:41, so I knew it would be just a matter of months before he’d be faster than I. That prediction became true in a big way: somehow he finished in 1:28, dominating the under-18 category. Looks like his dad’s running prowess has rubbed off onto him. It’ll be delightful to see him get faster still over the next decade.

Comparison to Other Years

These are my times from all five Horsetooth Half Marathon attempts, listed in increasing order by final time.

In comparison to two years ago, I was over a minute faster and felt way more comfortable. Not bad for being older and about 8-10 pounds heavier due to increased muscle mass from intense weight lifting during the last year.

I believe I could have pushed a little harder to finish in 1:37. That would have put me within a minute of my best time on this hilly and tough course, achieved 12 years ago. For now it seems like I am doing a pretty good job fending Father Time off.

A Great Weekend for 43-year-olds

Speaking of battling Father Time, it was a very inspiring weekend by several famous folks my age.

First there was Tiger Woods. After not winning a major in 11 years and going through a series of very public scandals and serious injuries, he won the Masters on the same day as the Horsetooth Half Marathon. Can’t say I was ever a golf fan, but the comeback was exciting and deserving of a lot of respect.

The next day, Jimmie Johnson, the seven-time NASCAR champion who is also 43, ran the Boston Marathon. He finished in 3:09!

Then there was a guy named Nick Thompson who, like Tiger Woods, is a Stanford alumnus. I didn’t know him even though he was in my undergraduate class, but he was the subject of a very interesting Wired article entitled “An Aging Marathoner Tries to Run Fast After 40.”

At Boston, he ended up running a personal record of 2:33. Amazing!

Kudos for staying a step ahead of father time. I feel your angst! ↩ Reply