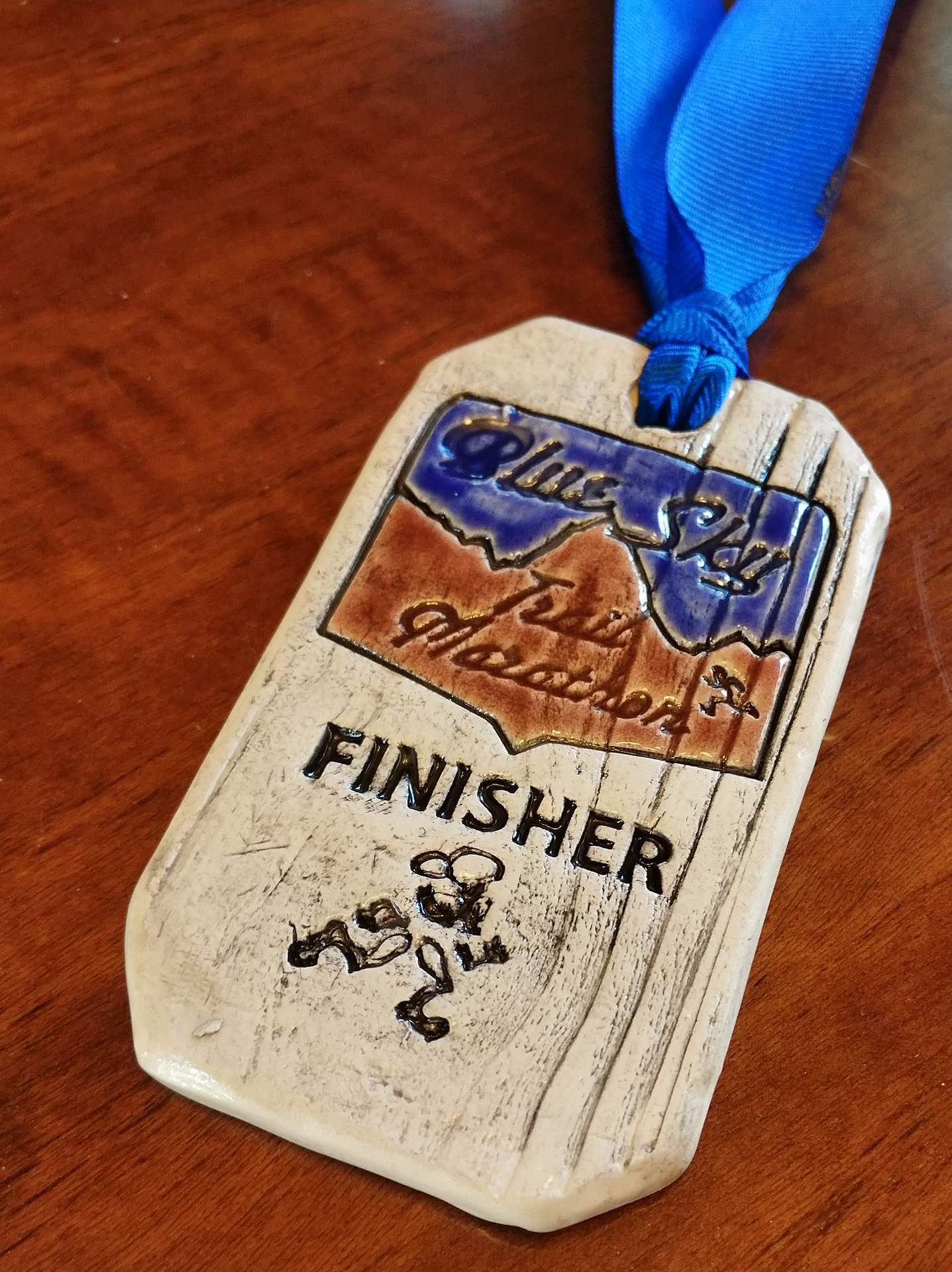 This was a marathon I had fully intended to be on the sidelines for. Back in December, you see, Amber told me over a warm Ethiopian meal that she had just signed up for this, which would be her first race over 13.1 miles. She’d have 10 months to train, and I knew she was going to crush it.

“I’ll come out to cheer for you,” I promised.

But after a promising first third of the year, things had changed. She needed time to sort some things out in her life. Running was no longer a priority. And in the process of doing so, she moved many states away. She was no longer going to run Blue Sky.

In the meantime, I was having something of a running rebirth. It begun with an impromptu Quad Rock 50-Mile entry in May and continued with another impromptu 52-mile run with Alene in my neighborhood. It also included several double-digit-distance training runs wearing a weighted vest with Jennifer and other friends. It was almost as if I was going to run the Blue Sky Marathon, even though I wasn’t because I had not registered.

But then I got a message from Amber.

“I was able to contact Gnar runners and they will transfer Blue Sky into your name. Have a great race!”

It was a really nice thing she had done for me. I was going to run the trail marathon after all.

As I stood a few feet behind the official start line, I reviewed the three goals I had in descending order: 1) finish, 2) don’t get seriously injured, and 3) cross the finish line in under five hours.  I figured the third goal would be more difficult of the three, considering the hilliness of the first third of the race; the rocky, virtually unrunnable parts of the Blue Sky Trail; and this being a marathon being held off-road instead of on speedier pavement.

I started the race pretty well, running at a moderate effort to and up Towers Road, taking walking breaks of only a few seconds on the really steep parts. I was surprised that the course went only about halfway up Towers before branching off to the Loggers Trail. Clearly, I had not done enough reconnaissance of the route beforehand.

All was well running down the Stout Trail, but by Mile 7, the left calf was already getting tight. A couple months prior, it suffered a strain during a training run, but was better after about 10 days of no hard running. It felt totally fine during the subsequent weighted vest runs, so it was both discouraging and a little surprising to have it be an issue a third of the way into the race.

Still, it wasn’t a complete disaster. I was still running almost as normal when I passed the start/finish area at Mile 8, where I stopped for about three seconds to shed arm warmer sleeves. Other runners started to catch and pass me at Mile 10, but my Mile 13.1 split was encouraging: 2h08m. I thought of Amber and how she ran the Horsetooth Half Marathon half a year ago about seven minutes faster than this split. It also meant that I had nearly three hours to run the second half of this race to achieve the five-hour time objective.

That seemed like a more than ample amount of time even for having a gimpy left calf, but knew anything could happen, like taking a fall on the slick red rock slabs on the Blue Sky Trail and gashing a knee, bonking and cramping on the steeper ascents close to Coyote Ridge or Indian Creek.

Sure enough, with tired legs on rock strewn paths, I started tripping. The first time I was able to recover my footing (usually while letting out a loud “UGH!”), but at Mile 15, my toe caught a rock, spinning me 90 degrees around and causing me to land on the backside.

The worst part wasn’t the impact with the ground, but rather the cramps in the legs that ensued from reflexively trying to break the fall.  That kept me seated for a good 20-30 seconds. Meanwhile, my friend Tina—one of the top 10 females—went by. I’m not sure if she saw the fall; it might have looked to her like I was just resting.

I tripped a few more times but without falling. Instead of taking a tumble, twice I veered off the trail while recovering from the missteps, nearly running off a cliff in the process!

Once I got past the Mile 18 turnaround and then the red rock slabs, there was less drama. Instead, I got a emotional boost by encountering Chrissy, Rachel, and then Jennifer—the same fun ladies I had done training runs with during the summer—on the course at varying times going in the opposite direction.  All of them were looking good, like they were not too exhausted and were having fun. (Indeed, they all finished the race, which was the first trail marathon for at least two of them!)

In the last eight miles, both quads and calves (as expected) had fatigued to the point where the lame calf muscle could not be blamed for a slow pace. And it looked like I was going to comfortably finish in 4h45m, or maybe 4h50m.  But then came the realization that it was possible that, like most marathons, the course might end up being slightly too long.

In fact, after 4h53m and 26.3 miles had elapsed… I still had half a mile to go! That is when I tripped for the final time and took a hard tumble. I let out a scream after hitting dirt because in trying to break the fall, both of my legs completely cramped liked before.  Another runner then passed by me and momentarily stopped to check that I didn’t need some sort of help.

“Go, go! I’m ok,” I exhorted even though the grimace on my face likely indicated that the last part of the statement was not 100% true. “You’re so close!”

He went on while I remained on the ground for another 30 seconds, waiting for my legs to uncramp.

Now finishing under five hours was going to take a lot of effort.  Somehow, I mustered the energy to run the last 600 meters at 8-minute/mile, which felt like an absolute sprint compared to the 11-minute/mile pace I was mustering in the second half of the race.

I crossed the finish line after 4h58m50s of running. Hitting the sub-five-hour goal felt like a victory, or at least a good effort in Amber’s place.

But how I wish she could have run the Blue Sky Trail Marathon as originally planned. She would have crushed it.