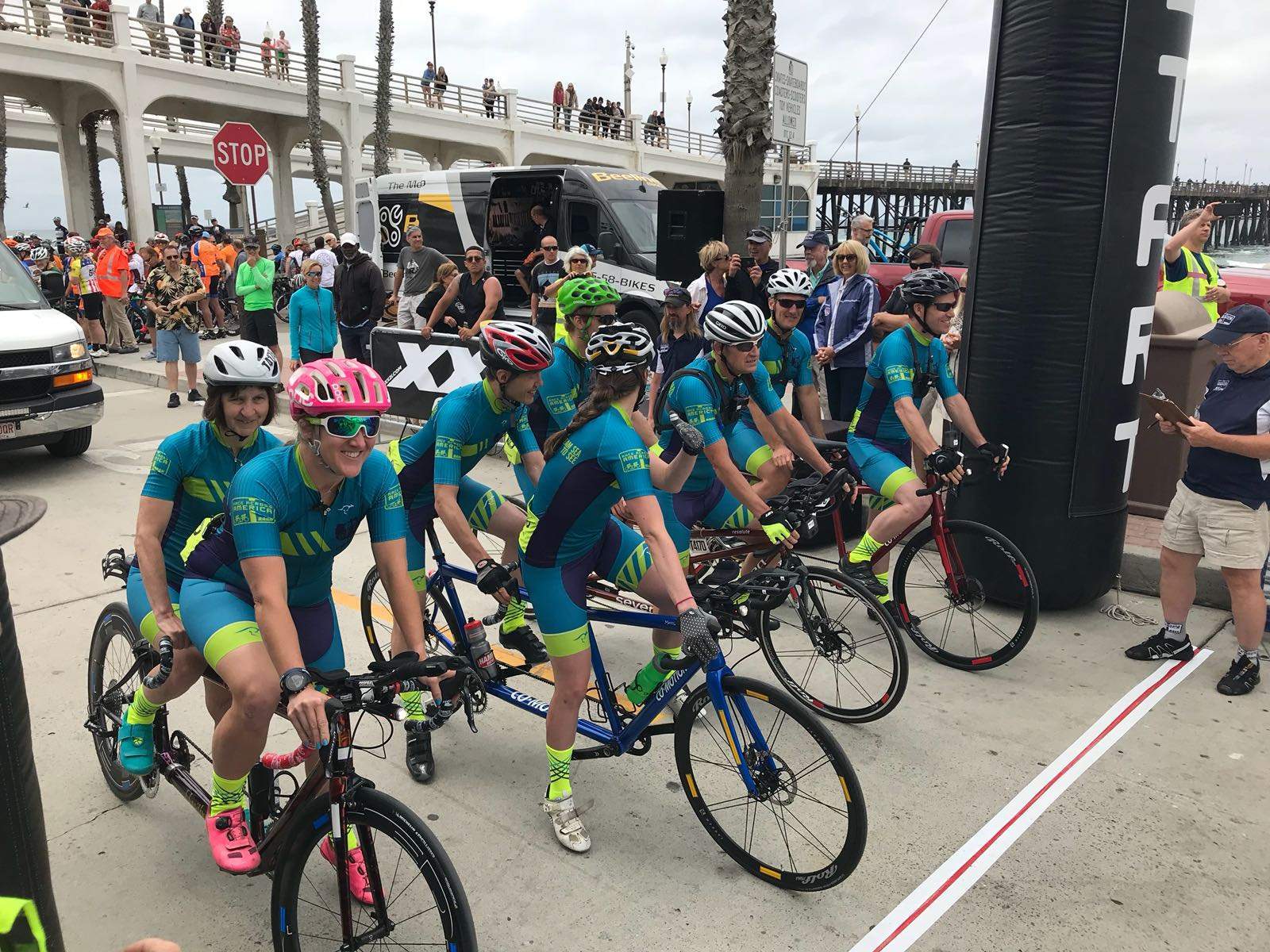 In mid-2017, my friend Dan Berlin called me about an ambitious project he and Jack Chen conceived to draw attention to the capabilities of vision-impaired people, folks who are largely discriminated against in the workplace. Both Dan and Jack, you see, are both legally blind and yet they have achieved immense success in their careers and in endurance sports.

The project was to field the world’s first four-tandem team (Team Sea to See) with all blind stokers in the prestigious Race Across America (RAAM). RAAM is a non-stop race from Oceanside, California to Annapolis, Maryland, and has had quite a history since its conception in 1982 as the Great American Bike Race.

Due to my friendship with Dan, my passion for endurance cycling, and experience in cross-country bicycle races such as the Tour Divide and Trans Am Bike Race, I committed to being part of the support crew immediately. Later on, I stepped up to the role of crew chief, which was good real-world experience for the Master in Leadership and Management degree program I was simultaneously doing along with a half-dozen other leadership roles.

Below is how Team Sea to See did in RAAM. Spoiler: we succeeded, but not without an incredible amount of challenges.

Team Sea to See is committed to proving that people who are blind can succeed in any field. We believe that demonstrating this capacity to succeed is critical to empowering others in the blind community and changing society’s perceptions of the blind. We are illustrating this capability by building a team of high-achieving businesspeople and athletes who are vision-impaired to tackle RAAM and conduct an accompanying media and outreach campaign.

We believe that lack of exposure to and understanding of blindness plays a major role in keeping employment rates so low for the blind community. Employers aren’t intrinsically hostile to the blind; they just don’t understand how people who are blind can, through ingenuity and adaptive technology, enjoy the same success as their sighted colleagues. We’re taking on the high-profile challenge of the Race Across America to show what blind success looks like, on and off the bike.

In the world of ultra-endurance cycling races, one name stands out. For 35 years, the Race Across America (RAAM) has been the world’s most revered – not to mention feared – ultra-endurance bike race. Almost 50% longer than the Tour de France, RAAM must nevertheless be completed in half the time – with no rest days. Since its inception in 1982, roughly ten times as many adventurers have summited Mt. Everest as have completed the Race Across America in the allotted time as solo riders or two-person tandem teams. Even tandem relay teams face an almost unimaginable challenge, racing bicycles from Pacific to Atlantic in nine days or less, battling sleep deprivation, unpredictable weather, and over 175,000 feet of elevation climb to earn the most coveted jersey and medal in ultra-endurance cycling.

With settings ranging from the Sonora and Mojave deserts to the peaks of the Rockies, from Monument Valley to the mighty Mississippi, the Race Across America is an adventure story like no other. Yet, even within the incredibly small community of athletes daring enough to attempt this mammoth challenge, the members of Team Sea to See stand out as a truly exceptional group. In addition to their status as world-class athletes and successful businesspeople, all four stokers on this historic eight-person tandem relay team are blind.

Team Sea to See was founded by blind racers Jack Chen, an attorney for Google, and Dan Berlin, CEO of one of the world’s leading vanilla extract companies, as both a tremendous personal challenge and, significantly, as a means of raising awareness about the capabilities of people who are blind everywhere. A shocking 70% of Americans who are blind are jobless, and this number hasn’t changed significantly in decades. Believing that this stunningly high figure is due in large part to a general lack of understanding about what people who are blind are capable of, Jack and Dan conceived Team Sea to See as a way of modeling success – showing what people who are blind can do, both on and off the bike.

To achieve this mission, they have assembled a dream team that has collectively completed over 50 marathons and 80 triathlons (including over 30 ironman races), competing in and winning numerous races all over the world. While RAAM is a challenge unlike any other, Team Sea to See is ready to meet and exceed it – to explode expectations of what is possible, just like its team members have done all their lives.

We’ll be telling our incredible story through major media channels (including the 25 million page-views RAAM generates internationally each year), and eventually bringing Team Sea to See to the big screen via a feature-length documentary. Our riders have already been independently profiled in everything from Outside and Trail Runner magazines to the Wall Street Journal and the CBS Evening News, and we expect similar coverage of this amazing story over the next few months, as well as further exposure through a major social media campaign due to launch in April.

All of this exposure will provide ample opportunity for us to showcase not just our story, but also our generous and indispensable partners as well. We will proudly display the logos of our sponsors on our racing kits; and we will also feature sponsors on our website, in press materials, and, potentially, in the documentary.

We hope you will consider supporting our cause and helping us to become the first-ever team with all blind stokers to complete the Race Across America. This is truly an historic endeavor, and one that we hope can inspire people with disabilities around the world, while also changing the way employers view people with disabilities as well. We would be proud to have your company partner with us as we strive to model Success in Plain Sight!

So far, our lead sponsors include Google, the American Foundation for the Blind, and Co-Motion Cycles. We also have over 400 individual donors (a number we expect to rise significantly after our major social media launch in April). It would be our honor to add your company to our list of sponsors. For additional information, please see our website at www.teamseatosee.com. Thank you for your interest!

We held a couple of training camps that involved 24-hour simulations, which gave both racers and crew members practice with Vehicle Meet Points (VMPs), their roles and responsibilities, and, of course, endurance training and nighttime riding practice for the racers.

Training Camp #1 was held in Gilbert, Arizona, in late January 2018 at the home of Michael Somsan, who was originally slated to be one of Team Sea to See’s stokers who were blind.

Training Camp #2 was held in Grand Junction, Colorado the third weekend of April 2018, at a large AirBnB rental.

Below is a video made from Training Camp #2.

Challenges Encountered Before and During the Race

The following are notes I quickly jotted down during or shortly after the race and are largely unedited since then.

Hi guys. Here’s a list of things I can remember going wrong with the RVs so far on Race Across America and how the team fixed each problem:

Second in the under 50 mixed category was Team Sea to See (USA), a team of four tandems, all of which had a sighted captain and a blind stoker. Their finish of 7d:15h:3m (16.77 mph/26.99 kph) established the record for sighted/non-sighted tandems.

The winner of the Lee Mitchell Award (Best Crew) went to the crew of Sea to See (USA) finished in 7d:15h:3m (16.77 mph), good for 2nd in the 4P Mixed under 50 category. The team rode 4 tandems, each with a sighted captain and a blind stoker. As you might imagine, the Sea to See support crew faced a number of unique challenges, and they passed with flying colors. But, this year, the choice was particularly difficult. We’d like to mention the peerless performance of Team Beemer. In their multi-record setting performance, the support crew for Team Beemer made an exchange every 15 minutes for 5 days. That’s roughly 500 exchanges. That’s something you would have to see to believe. Sea to See and Team Bemer faced very different challenges – both were up to the task.

My favorite news journalist, Katie Eastman, won an Emmy for the following video production about Team Sea to See.

Some of her initial filming was done from my Audi TT Roadster on Centennial Rd., in the Horsetooth Foothills of Fort Collins.

Bicycling Magazine did a feature article on Team Sea to See.

When I was growing up, every week my dad would drop me off at the library where I would usually check out a dozen books and the latest edition of Bicycling. So it’s kind of neat to get a mention in it a couple decades later!

Thanks to the following people who helped make this a success. Everyone below, aside from some folks on the media crew, was a volunteer who donated both time and dollars to make this goal become a reality.

The film crew also had a couple volunteer drivers whose names I don’t have.

Supported Outside of RAAM